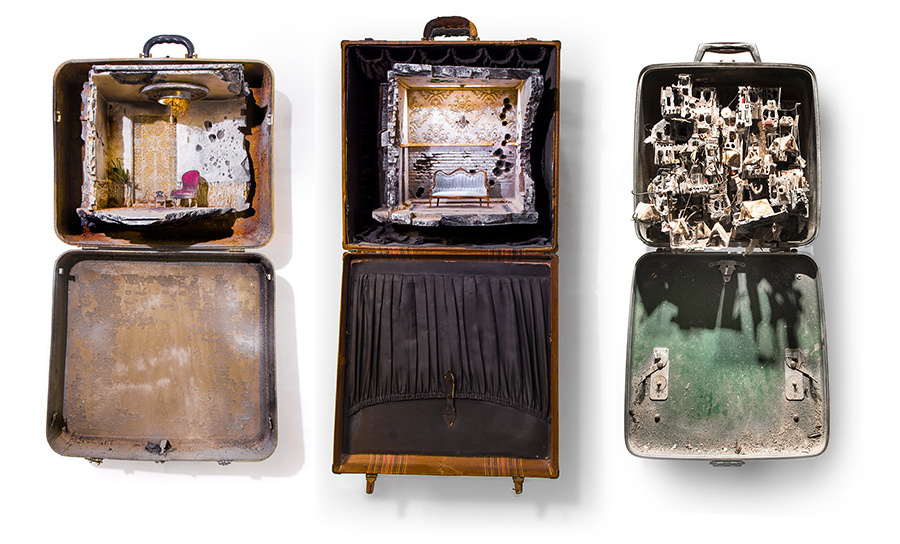 The building is gutted, ravaged beyond recognition. The concrete walls are missing chunks and what’s left is pockmarked with bullet holes; they hemorrhage electrical wires and random protrusions of metal rebar. There’s still a birthday cake on the dining table.

It’s Syria. Of course it’s Syria. But zoom out. It’s not actually the real thing; it’s a perfect diminutive replica of it, right down to the Qur’an left on the bookshelf. It’s like the most devastatingly macabre dollhouse you could imagine. Syrian artist and architect Mohamad Hafez has made these miniature scale models of his home country his forte – or his obsession, depending on how you see it. “My work [started as] a cathartic expression, a therapeutic way for me to cope with these issues that I was living, be it homesickness, the travel ban, or wars in our region.” A close up from 'Baggage Series #4'

Hafez has been recreating small-scale snippets of Syrian life since 2004 – well before the war swept and subsequently destroyed the nation. Raised between Saudi Arabia and Syria, he moved to the States when he was eighteen to study architecture at Iowa State University. Except as it turned out, he was going to be trapped there for the next eight years, wallowing in homesickness in the Midwest.

I can’t be looking at news cycles and seeing cities that I love deeply in the Middle East being bombed out of existence and come Monday morning, a coworker here is very upset about the coffee being cold.

Back then, in the wake of 9/11, an era rife with Islamophobia, there was a whole other de facto Muslim Ban in place. Trump’s is well documented, but Bush did it first. “During the Bush administration, there was a travel ban in place, but it wasn’t called a travel ban – it was called NSEERS,” Hafez recalls. NSEERS stands for National Security Entry-Exit Registration System; it was part of the US’ War on Terror, created to increase the screening of travelers from ‘certain’ countries. It was effectively designed to curtail the movement of Muslims in and out of the US – mainly in. “If you’d like to find an equivalent word for it in Arabic, it would be ‘baltagy’,” Hafez says with a laugh, using a colloquial term which loosely translated to ‘thug behavior.’ One of the pieces from 'Unpacked: Refugee Baggage' which includes an audio narration of a refugee's experience.

“We had to register with the FBI every time we changed addresses, every time we visited family in other states, every time I had to find a new job. You waited for eight hours every time you left the country and came back,” he says. “Some of my friends went overseas to visit their families, and they never came back to university because they weren’t issued a clearance. So the result of that, I learned very quickly that I am not allowed to go back home.”

how can art bridge between people in very divided, xenophobic times? Because he was effectively barred from returning to Syria, Hafez started to bring tiny pieces of Syria to him, with hyper realistic miniature models. That was about a decade and a half ago. Hafez is now an architect in Connecticut who designs skyscrapers by day and by night continues – fifteen years on – to recreate Syria. But now, it was the destroyed version of his country.

Anybody that believes in the Day of Judgement, when you’re asked what have you done with your life, the answer to me could not possibly only be ‘well, ya Allah, I built you a whole bunch of skyscrapers. And they look fantastic.’

The style of his work has fluctuated; from nostalgic to documentarian and back. “When I first started [in 2004], it was a way to heal my ‘troubled’ soul,” he says with a light laugh. “I was living here [in the States] alone, I felt like I was being punished not being able to go to my beautiful country. So that era is very nostalgic. And you see it in the work. It’s very beautiful, old Damascene and Aleppan architecture with houses overlapping, and laundry lines, and beautiful music. You know, the romantic vision of any Arab immigrant.” A piece titled 'Hireath' a Welsh word similar to homesickness, which depicts the chaotic beauty of Syria before the civil war.

That quickly gave way to work that was not merely designed to feed the cravings of his own nostalgia, but to reflect the bloody war that tore through Syria, and the refugee crisis that ensued. Once the war kicked off, a similar conflict kickstarted in his gut, the anger and the anguish of watching it happen. “I can’t be looking at news cycles and cities that I love deeply in the Middle East are being bombed out of existence and come Monday morning, a coworker here is very upset about the coffee being cold. Your dilemma right now is the coffee is cold? How about half of Damascus got wiped out by a chemical weapon attack yesterday?” he says agitatedly. “But you can’t say this to people. You can’t turn into the angry person. So for me to be able to do my day-to-day job as an architect, to meet with people, I had to let that energy out. So the work in my war series was a pressure valve, if you want to call it that.”

the work in my war series was a pressure valve

For one of his most renowned projects Unpacked, Hafez and Iraqi-born writer Ahmed Badr created an installation that a paired the real life stories of refugees as narrated by themselves, with dioramas jutting out of suitcases of their homes or landscapes of their war-torn countries. From the series 'Unpacked: Refugee Baggage'

It was this type of work that started to quickly gain traction in the art world and beyond. Since 2015, Hafez’s work has been shown across the States. The big difference was, this time, he made his work – which was now more based on the wars, destruction, and displacement – public. He had kept it a secret for the first ten years. His decision had everything to do with his own family’s exile from Syria. Before, he created his art to sedate his own raging soul; now, he wanted to create it to have an impact. To date, approximately half a million Syrians have been killed, the UNHCR has accounted for over 5 million registered refugees and roughly the same amount have been internally displaced. Hafez’s own family were rendered refugees in 2015; his parent sought refuge in Dubai, and his sister and brother-in-law got on a boat in the middle of the night to escape to Sweden. A closer look at one of the pieces from 'Unpacked'.

“That stopped me in my tracks. I started questioning my art and what I’m doing. Why I have what I have in the United States. The luxuries and the blessings that I have. The fact that I’m alive when a lot of people are buried with their families under the rubble. And the fact that my own family members are now refugees. And here I am, a successful architect with a platform and a voice, in America. What are you going to do about it?” he recalls. “Anybody that believes in the Day of Judgement, a day where you face the divine for every blessing that you’ve gotten, when you’re asked what have you done with your life in the United States, the answer to me, back then, could not possibly only be ‘well, ya Allah, I built you a whole bunch of skyscrapers. And they look fantastic.’ “

It was then that he decided his work would no longer be for just himself; it would serve an educational purpose. “When you look at life from that perspective, then it becomes a responsibility to take this work and talk about it, and humanise people.” Hafez in his studio in New Haven

In a time where refugee is practically a dirty word, and Trump-era politics have exposed a searing xenophobia and Islamophobia in the US – and well beyond – Hafez’s core aim with his work now is to start a conversation, in large part, about anti-immigration sentiment. “That’s what I’m interested in: how can art bridge between people in very divided, xenophobic times?” With his art, and in tandem with the talks he gives – just this month he spoke at the Arab Conference at Harvard – Hafez’s focus for the past few years has been to answer that question. “I believe we have a big responsibility to build bridges between cultures and to push back against the current rhetoric in the media. But it also has to be done right. It has to be done strategically. It has to be done with grace. And love. And peacefulness. And I have found that art, in my case, is very effective,” he says. “You can’t build bridges by saying ‘this is me! This is my identity, take it or leave it! You guys are racist!’ That’s us getting on the defensive – because the current rhetoric pushes you into the defensive corner. But it takes a lot of patience to not fall into that trap.”

You can’t build bridges by saying ‘this is me! This is my identity, take it or leave it! You guys are racist!’ That’s us getting on the defensive – because the current rhetoric pushes you into the defensive corner. But it takes a lot of patience to not fall into that trap.

His main aim now is largely educational. He sells his pieces to museums, galleries and universities, avoiding private buyers unless it’s a commissioned piece. “I’m interested primarily in the educational aspect of my art. The big, big pieces, I don’t sell to individual collectors because it will get buried away in their private collection.” One of the pieces from 'Damascene Athan' a more recent series that focuses on capturing Syria before the war.

He’s now come almost full circle. One of his most recent collections, Damascene Athan, holds the same nostalgia as his very first works. Nestled in elaborate Victorian frames, the pieces try to recapture Syria before the war. “We have now generations that are born and raised knowing nothing but war and destruction. And unless our artists and historians tell a different story to these young generations of what their countries used to be like, they’ll never know.”

36 Incredible Works of Art on the Streets of Morocco 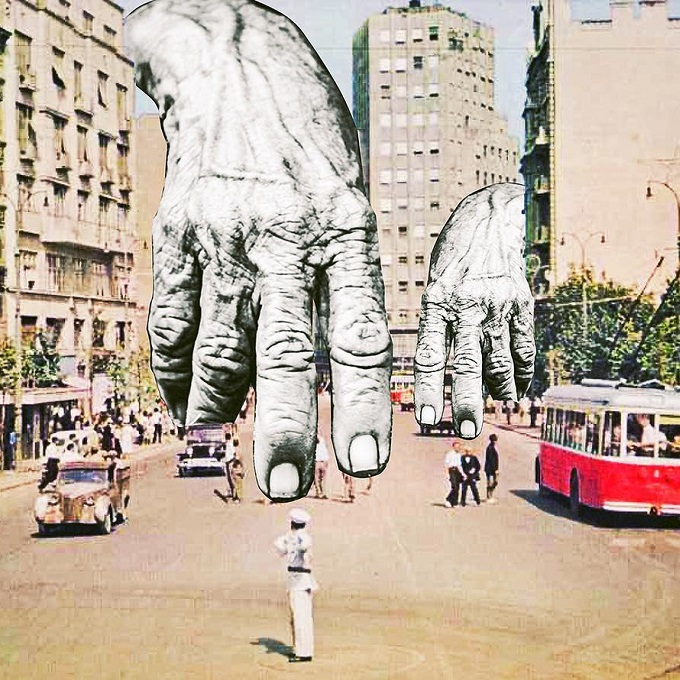 "Integration" and "assimilation" projects have long failed at actually, truthfully...

A Digital Home for Syrian Artists in Exile: How a Berlin-Based Creative is Making it Happen

Not only is artwork in the Middle East at risk of remaining stagnant, never to...

Art in Custody: The Pieces Lost, Damaged & Censored Travelling Across the Middle East

Basel Zaraa has been a refugee his whole life. Born and raised in the Yarmouk Camp...

This Palestinian Refugee Etches His Journey on People’s Flesh