He has been bullied and ostracized, but has come out fighting, for fashion and for freedom. Farah Hosny meets the inimitable, mustachioed Mohanad Kojak. 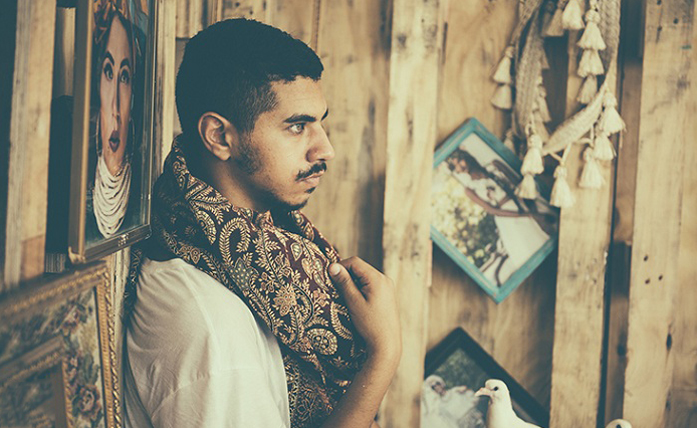 “Fashion is lifestyle; I think everyone’s lifestyle is reflected in how he or she dresses,” Mohanad Kojak tells me as he settles onto a wooden crate in his bohemian wonderland of a studio where vintage frames are carelessly strewn around, empty glass bottles adorn wooden stepladders, and half-sewn floral creations are casually draped on mannequins. “You can’t judge someone from how they dress but you can tell to some extent how they want people to perceive them - even of it’s not the full truth behind their personality but it still gives you a hint about the person.”

And fashion and judgement are two predominant themes in the young designer’s life; the former of which he has dedicated himself to and reveres as an art form and the latter which has plagued him since he can remember and which he consistently works to battle – often singlehandedly and always without giving a damn about societal pressures. And the two have been inextricably intertwined on his path as he’s ascended the sartorial ranks of the Middle East. Always the artist, he was one of those people who was bred around creativity and seems to just intrinsically have it in his blood. “My mom’s family comes from an artistic background. I was always interested in art; I used to sketch and dress dolls...” Kojak begins. He whips through his fashion education; a stint with famed bridal designer Yasmine Yeya, some time at the iconic Azza Fahmy Design Studio for jewellery, work with Aya Afifi Designs and a flurry of other impressive names in the field, but it is not until university that his first collection was conceived, a response to a project for one of his courses. What had been a hobby up until that point suddenly turned into a shoot which spiralled into boutiques requesting the pieces, which eventually evolved into the brand that is Kojak today.

I’m someone who needs to experiment and play around and do fucked up shit, you know? If I’m bored or not inspired then don’t expect something that’s new or different or has an identity.

And that brand, he defines as “boho chic but also goes in the direction of costume drama…it’s more theatrical. I believe that it’s somehow a form of wearable art.” Art, which, with its elevated bohemian brilliance has captured the hearts of models, fashionistas, and socialites alike, graced the covers of magazines and popped up at major events. Powerhouse actresses Dorra Zarouk, Yousra, and Jamila Awad have all worn his creations, as have other designers such as Dubai-based Mrs Keepa, and even global supermodels such as Victoria's Secret Angel Izabel Goulart, and he was one of only 2 Egyptian contestants competing in the first season of Project Runway Middle East. It’s a bold take on boho; he even uses furniture fabrics as opposed to ones usually used for clothing because they carry the precise patterns he wants utilised in his designs. And tying in with his penchant for the theatrical he doesn’t believe a piece ends at its physical manifestation. “I believe in stories,” he says, “It makes the piece more interesting. I’m very inspired by human relations – how people deal with each other, whether it's good or bad. Any piece will have a story behind it, which I try and reflect through the colour, fabrics, cuts, and definitely in the photo shoots – the storytelling behind the shoot, even the tone of voice in the text that I’ll post with each image.”

Each one of the campaigns he creates for his collections is a beautiful tale; he creates a striking narrative with each shoot. And the beauty showcased in those shoots is not always the standard cookie cutter model we're used to seeing donning designer pieces. He believes beauty is inclusive; he's featured a model with albinism and one with vitiligo; fuller figured models have popped up in his shoots; hijabi women (including his mother) often make an appearance in his campaigns; he has even used a drag queen. His brand, to him, centers on expression - “It’s a very experimental brand. I like to play with different elements. It’s a risky brand as well; every piece or collection I make I’m not sure how people will perceive it” – and that experimental element extends appropriately, or rather, begins, with the designer himself. “I’m someone who needs to experiment and play around and do fucked up shit, you know? I have to do this crap because, maybe you want to experiment and then some kind of pain or experience will inspire you somehow. Everyone needs this over-the-top or ‘weird’ thing to try every now and then, especially designers. If I’m bored or not inspired then don’t expect something that’s new or different or inspiring or something that has an identity.” Though in the creative field, his experimentation has borne him the indisputably beautiful fruits of his labours in the form of his designs, in his personal experiences, the result has often been a sour one. But he simply says, “”I will bear the consequences of my experimentation.” And he has. From the time in university where he was bullied for being different and consequently raised holy hell about the issue, singlehandedly protesting on campus; to the 2014 Coke video he created for their anti-prejudice Ramadan campaign where he boldly said that despite what people said about him being a 'sissy' he was pursuing his dream one step at a time; to his unyielding stance when he believed he was being cyberbullied by Indomie in 2017 about his choice of hairstyle; he has always bucked societal conventions.

It’s very sad to accept the reality, not because you want to accept it but because that’s the only one available. I try somehow to change it.

His resistance arguably began when he wore an earring to college in Cairo and was pushed around by students. When the university failed to appropriately punish those responsible, Kojak took it upon himself to seek retribution. “That college incident was a turning point in my life,” he tells me, “I got bullied a lot on campus but this wasn’t just a normal incident. And when my complaint wasn’t taken into consideration, I did something. Also, I’m very stubborn and when I get annoyed or hurt I need revenge. Some people have the misunderstanding that when you let things go, to them that means you are unable to defend yourself. I had to show them that that’s not true and if I wanted to protect my rights I will.” In this manner he’s been fighting what he sees as prejudice all his life. He even takes it upon himself to fight other people’s battles; such as one simple incident where he saw a waiter at a café hitting on the woman, called out the manager and requested that seeing as it was meant to be a place where people were comfortable, they should be treated with respect. “I never let things go easily,” he admits. He’s one of those people, who, come hell or high water, will make his point; injustices are not something to him, to be silently swept under the rug. But as he's grown older, he's found it easier to let things roll off his back, contending that while they still affect him, the extent to which they do has lessened over time. "Incidents like these used to bother me in the past, but what I began to realise is that it's never about me. Bullies are threatened by success and individuality and anyone who doesn't conform to what they consider the norm."

“The university incident, I escalated the situation – like I always do,” he adds with a laugh. “I wanted to send a message.” He pauses. “My mother once told me I don’t need to discipline everyone, but I don’t really do it intentionally; I don’t do it to dole out discipline; I look at it in the sense in if there’s a problem, why not solve it? It’s very sad to accept the reality, not because you want to accept it but because that’s the only one available. I try somehow to change it.” In a country where experimentation and different thinking are often squashed like a pesky insect and those who do not fit into a certain archetype are often tasked with carrying the burden of facing an incessant stream of prejudice Kojak understands this, dismisses it, and is willing to accept the the ramifications of such a dismissal. With striking blue eyes, a Dali-esque moustache which has become his signature, and always dressed in outlandish outfits, he certainly stands out in a crowd. But standing out is not often a concept embraced in our culture.

“The society here is very limiting and pressuring,” he says, “The worst thing is that we’re not giving each other the space where everyone could go with the flow and experiment.” Due to that cramped concept of what can neatly be placed in the human-construct box of ‘these things are okay’ those who find the cage claustrophobic are often on the receiving end of negativity. “I don’t see how what I do irritates people, maybe it does, but I don’t do it intentionally. Like I don’t wake up in the morning wondering what to wear in order to piss people off, you know?” he laughs.

I don’t see how what I do irritates people, maybe it does, but I don’t do it intentionally. Like I don’t wake up in the morning wondering what to wear in order to piss people off, you know? But he has pissed people off along the way whether or not the intent was present, by mere virtue of his refusal to bend to societal convention. “Now I believe everything happens for a reason,” Kojak mulls. He will continue to create – “I appreciate the effect or the power of an outfit or a piece” - and he may very well continue to kick up controversy along the way. But while most of us may wither under the judgmental glare of society, Kojak, frankly my dears, doesn’t give a damn.

From Mosque to Marquee: A Conversation with A Sufi Music Collective