Worn by everyone from supermodels Gisele, Kate and Naomi to celeb royalty (and actual royalty) Queen Rania, Oprah and Demi Moore, a Dima Rashid piece is about as iconic as it gets. Farah Hosny meets the jewel of the Arab world's eye... 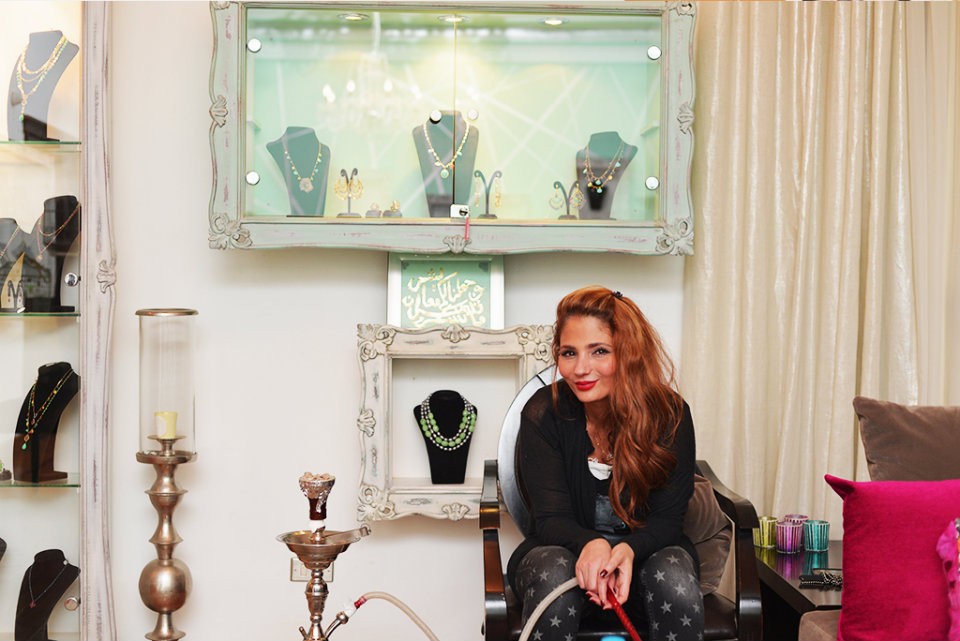 I can imagine Dima Rashid’s brain in Technicolor. The second she walks into her Zamalek boutique for our interview, in a flurry of voluminous blond hair and star-printed pants, the words flow from her mouth at a mile a minute, lively lavish hand gestures accompanying them. She instantly plops herself down on the plush couch, orders herself a shisha – one which arrives looking as jewel-adorned as her signature pieces that are scattered artfully in glass cases surrounding us – and asks us if we’d like one too.  I’m not exactly used to being asked if I’d like to smoke a customised shisha at jewellery boutiques. Shocker, I know.

“As a child, my father collected semi-precious stones,” the jewellery designer explains, settling into the couch and taking a puff of her shisha, a plume of smoke floating out from her cherry-red painted lips. “We had a game growing up; my father used to ask us about the names of stones, like what’s the difference between amber and coral, things like that.” That tiny spark, instilled in her as a child, may or may not be responsible for her life-long love affair with stones and jewels, but it certainly cemented her understanding of them early on. Now, years later, the Palestinian-born designer has built a veritable bejewelled empire, adorning the skin of supermodels and queens alike with her glittering pieces.

Her designs have an undeniably ethnic essence, but are glossed over with a modern touch; a sort of fusion forged from the tradition entrenched in her identity and culture, and that cosmopolitan feel that comes from being a kid with a globetrotting upbringing.  Born in Kuwait, raised between Riyadh and Toronto, she resided in her homeland of Palestine for a while before its ongoing turbulence lead to her eventually moving to Cairo, essentially making her one of those global citizens, something which reflects in her often Crayola-hued creations. “I think…I think it’s ethnic but modern,” she says, mulling the aesthetic of her jewellery. “It’s bohemian but structured…it’s not very arabesque even though it’s extremely arabesque!” She pauses. “Look, I think it’s very easy for any of us that have grown up in more than one country to have both souls,” she says finally. It is perhaps that seamless amalgamation between the old world and the new in her creations that struck a chord globally with major players in the industry. Evil eyes and hands of Fatima dominate in Rashid’s collections, but she abandons the typical, situating them in delicate multi-layered necklaces, or rosary-style setups. Stunning stones too, take centre stage, in modern chunky cocktail rings or statement earrings in hues that remind you of summer popsicles.

But though she’s now the go-to gal amongst international glamourati for glittering pieces – everyone from Kate Moss to Eva Longoria have donned a Dima Rashid piece – her ascent into the high-end accessory world was almost accidental. Though she dabbled in creating pieces all her life, her intentions at the outset were entirely different. “I studied psychology and political science – I had no plans whatsoever to do anything related to jewellery,” Rashid elaborates. “All my life, I’d looked up to people like Hana Ahsrawi and Yasser Arafat, so it would have made sense for me to be in politics.” With a life deeply entrenched in the political sphere – Yasser Arafat – who she fondly refers to as Abou Ammar, like many Palestinians – is the man who gave her away, to a husband who “was chief negotiator in the Israeli-Palestinian peace treaty,” a political trajectory would have been more apt. But the designer quickly grew disillusioned with the political sphere. “When we lived in Palestine, we used to get air struck in Gaza. Like, there would have just been a political conference held at 6 PM, and at 7 PM they would strike the houses,” she says, shaking her head. “So, what politics?” And just like us regular folk, the lady that’s now casually friends with Naomi Campbell and whose jewellery appears on Queen Rania’s holiday cards, was lost and listless before she discovered her passion. “After university, I would pray to God every day, I swear, I was like please God, give me something I love, give me something I love. And I couldn’t think of a career! I was always bored easily. I always prayed that I would do something that would be fulfilling for me.”

It was on a trip to London, where she discovered a bead shop with plans to bring back a kit for a friend, that she stumbled upon the craft that would eventually grace covers of Vogue. “I went to the bead shop – I went at like 11AM, and the store closes at 7PM,” she says. “I was there so long, they had to kick me out!” From that point onward, she was admittedly addicted.

But the moment that kick-started Rashid’s career, taking it from hobby to profession, was a random dinner at a Paris hotel years later, where she was approached by a French woman asking about the earrings she was donning; a pair she’d created herself. The woman in question turned out to be the Editor in Chief of Harper’s Bazaar, who pushed Rashid to sell her jewellery. That instance was the catalyst; “I got a small trunk and I put the jewellery in and I started going to every store I personally shopped from and liked.” From Harrods to Harvey Nichols, Rashid made the rounds, Avon-style, pitching her pieces to some of the biggest names in the industry, "Of course, at first they would look at me like, who is this crazy girl, what is she doing!?” Rashid exclaims, laughing. “But I got into seven stores that day – I couldn’t believe it!”

The next day, she personally called up Vogue’s jewellery editor Carol Walton to get an appointment. “And I met with the team – of course I’m sweating and I’m so embarrassed and I just wanted to get out of there!” But the Vogue girls chose some of Rashid’s pieces and three weeks later, called her to let her know Gisele Bunchden – yes, uber-supermodel, she of the endless bronze legs and perfect golden hair – had chosen to wear a Dima Rachid piece on the cover. “I was like, what? Sho? Leh!?” Rashid says, cracking up.

That was 10 years ago, and since then, her career spiraled into the stratosphere. Though now, a six second scroll through your Instagram feed will reveal a stream of evil-eye, old-coin, hand-of-Fatima infused jewellery, Rashid was arguably one of the first to take them out of the traditional realm and turn them into high-end, modern jewellery. “Evil eyes are more than 4000 years old,” she laughs with her Palestinian-lilted Arabic, brushing off the idea of her starting a trend. True, evil eyes have been used for centuries but she was one of the first to take them out of embedded culture and into cosmopolitan style. And if designers happen to emulate her aesthetic nowadays, “I’m flattered,” she says simply. “Look, whether we like it or not, we’re exposed, and we absorb, and we get affected. Like, I am Arab and I’m affected by the traditions and the things surrounding me. So are other people.”

Others, even before Rashid, have forged their own path using traditional styles, but powerhouse designers like Azza Fahmy for instance, took a different aesthetic route; more bold, more stellar silver work, while Dima Rashid focused on gold and a kaleidoscope of coloured stones. “I love colour and I like layers and I like anything that shines,” she says with a smile. “I’d love to say I’m inspired by gypsies…and by things from home, whether it’s colours of Mediterranean beaches, or the lotuses on the fences of Egyptians bridges.”

The first time I met Oprah – I started crying! And I called my mother and was like ‘would you please say hi to my mom!?'

Her speech is animated, just like her pieces, which are dripping in gold, injected with electric hues from crystal clear blue to watermelon pink. She has cheekbones that could cut glass and speaks rapidly, intermingling English with Palestinian Arabic, and she’s constantly breaking off into different trains of thought and tossing in stories to elucidate her point. She’s intense, and charmingly scattered; the mind of a creative artist. By default, her career has tossed her into a lifestyle where she regularly rubs shoulders with celebs (yes, Quincy Jones has casually come over to her house), however, she remains strangely grounded about it all, placing priority on character rather than glitz. “I’m not gonna lie and tell you I’m not star struck, ya3ni, I am! But from my experience…there are people that are just so impressive as people,” she explains. “There’s so many people I enjoyed working with; I mean, Shakira, Demi [Moore] and Susan [Sarandon], of course! But Queen Rania was something I was very, very proud of. Having her approach me, was like woah! And Zaha Hadid for instance, when she wore my jewellery – that was amazing.”

Even though Rashid is practically a celebrity in her own right, now a staple on the style circuit, the woman herself remains as self-deprecating and easygoing as ever, constantly laughing at herself. “The first time I met Oprah – I started crying!” she tells me with a laugh, burying her face in her hands, “And I called my mother and was like ‘would you please say hi to my mom!?’”

She still seems in shock at her success, and is still scared of failure. “There’s always a fear of not making something new,” she replies instantly about the drawbacks of her chosen career. “Always. More difficult than entering the market is to actually stay and compete and create your own zone, and create your own clients and create your own signature and your own look, and at the same time, keep making things that are special and different.”

But it’s a challenge she’s more than happy to take on, driven in equal parts by a sincere passion for what she does (she remains involved in the design of every single piece until this day) and the response she gets when people genuinely love her pieces. “Look, it’s beautiful. You’re working with beautiful stones. How can you be bored?” she says simply. “When I stay up until 4 AM working on a piece and I’m happy with it, I’m so excited! For me, it’s serious relaxation. The minute this doesn’t give me enjoyment, I’ll stop.”

Aside from her love of creating, her biggest reward are the responses she gets when people simply like her work. Though she’s grateful for every star studded cover, shoot and red carpet her pieces have graced, it’s the basic love of her work that she craves the most. “I mean, you can be sitting with the queen of the world and she gets photographed with your stuff, but it doesn’t mean that she collects it, y’know?” she says looking at me intently. “And that – like, it’s a blessing to have someone say they love your stuff. It’s an honour.” And judging by her gem-clad trajectory so far, we imagine those blessings will just keep rolling in.