From Mosque to Marquee: A Conversation with A Sufi Music Collective

They have faith, they have soul, and they have the vocal chords to match both. 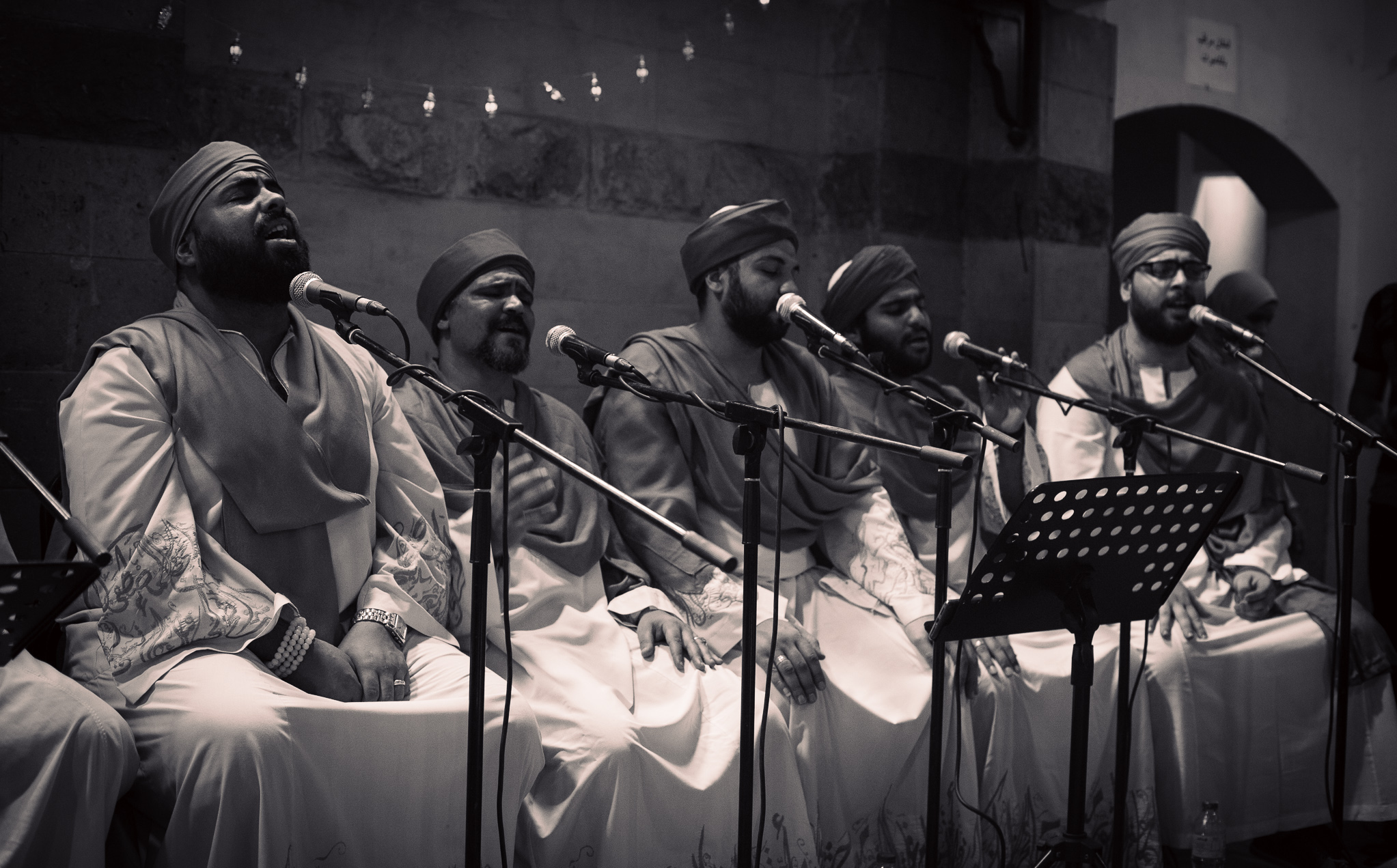 Translation from Arabic by Ahmed Ikram.

If you (for some reason) find yourself seated on the matted floors of the Sayeda Zeinab Mosque in Cairo on a Tuesday, you’ll catch about five hadraa performances throughout the day. Likewise, you’ll catch the same performances at Ali Zain Al-Abdein Mosque on Saturday, and the same goes for Monday at the Emam Mosque, Sunday at the Sayeda Nafeesa Mosque and Friday at the Hussein Mosque. It’s not exactly an uncommon occurrence, but a spectacle all the same.

It’s a common ritual for some Muslims - usually Sufis - to sit in a circle in a mosque courtyard and recite religious hymns and sayings, all in an innately musical manner - an act known as hadraa (it is similar to its counterpart in Christianity of a church choir or gospel music). So it was only a matter of a time for those same pious talents to venture out into the material world and try to join their God-given talent with their love of a higher power, and bring it out onstage.

Haadra isn’t just a performance like any other; it’s an invitation for God’s light to fill your heart.

It was at that point in time that Alhadra was born; a Sufi music ensemble made up of various ages and backgrounds, dedicated to bringing their craft - and creed - into the spotlight. “It started when I was blessed to attend a hadraa performance at the Sayeda Zeinab Mosque; it was my first time seeing and hearing one,” said the ensemble’s founder, Nour Nageh, going on to say how “Haadra isn’t just a performance like any other; it’s an invitation for God’s light to fill your heart.”

Hadraa is a religious tradition and ritual of sorts, mired in all things Sufi, with talented chanters and hymnists reciting their faith in a uniquely harmonic manner. It was already an art form, but now that it’s on a stage, considered a performance, it can officially don the mainstream title of ‘art’. This was the dominating sentiment that led Nageh and his troupe-to-be to take their work from mosque to marquee, so they could catapult it into an officially recognised art form. “Our folklore, our praises, hymns, chants and poems about our Sheikhs, our revered Sufi legends and characters - putting everything in song. It was too good to pass up.” The band was formed in 2015 out of Alrab3 Cultural Centre, and they were steadily joined by Sufi chanters they had previously performed with, and little by little, the ensemble was born. It had to go through as many steps as it did to turn out the way it did, and it’s all built on the experience they’d created for themselves at the mosque.

For a troupe of only 14 performers – ten chanters and four instrumentalists – their production value comes off as something rather grand, akin to the majesty of a 50-piece orchestra, even when heard on their SoundCloud or Youtube. Each voice in the ensemble is its own instrument, its own unique flavour in the stew, and when they all come together, it’s unimaginably distinct from anything else you might have heard. They not only put traditional religious poems and hymns to music, but they also write their own.

Of course, having 14 members in a band – playing oud, kawala, daff and gambi - can get a bit hectic, and this was something that Nageh was all too aware of. “I’m not going to lie; it can get pretty difficult managing all of it," he says, "But it’s not just about the music, not at all; it’s our praise for the one true God and his chosen Prophet that gives us the strength to soldier on despite the circumstances. Everyone in the ensemble loves what they do, so anything that comes our way is just a test from god, and we’ve weathered it all so far.”

One of the ensemble’s members, Omar, gave us a bit more insight into the formation of the collective. “I joined Alhadraa through a Facebook post by Nour. He wanted both traditional religious chanters (who recite words, but not to music) and actual musicians so that we could bring together our typical forms of praise with proper sheet music. At first we just stuck to praise, because we needed considerably more people for there to be proper role assignment; people to sing, people to hum alongside them, people to play instruments and so on, but we quickly grew in size and were able to develop our sound."

...it’s not just about the music, not at all; it’s our praise for the one true God and his chosen Prophet that gives us the strength to soldier on despite the circumstances.

Aside from Omar’s role as a chanter for the ensemble, he’s also the group’s writer/proof reader of sorts. He checks the group’s poems and works for grammatical and/or linguistic errors, writes poetry in both colloquial and formal Arabic, and handles any editorial or press-related writings. Though Omar is a singer first and foremost, he believes the integrity of the words they use is absolutely vital. "It's important to not have a lot of significant language mistakes. Not only does it mess with the flow of a piece, but it disorients the listener and has them doubting what’s right and what’s wrong, instead of enjoying the music. There’s nothing good about having no idea what you’re singing about, and that’s how it comes off with the lack of correction. How are you supposed to convey an experience through song if you barely have an idea of how to retell it right?” A few nifty perks come with the territory when you’re rocking 14 members in an ensemble. Every performer has their own forte, each distinct from the other regarding skills and contribution to the grand scheme. “Nour, apart from being the founder of the ensemble, is the chief source of artistic inspiration we have. He actually knows a thing or two about performance. Sheikh Ashraf – a fellow chanter – has an extensive knowledge of the poems and pieces we draw from. So his impact with the writing is significant. As for myself, I handle the linguistics, and the same diverse role assignment goes for the rest of us. I think that’s what makes 14 a lucky number for us, and it’s not just about the production value or the exposure; it’s the first time I’ve felt that I’m more than just a chanter, and I feel the same applies to my band mates.”

As is customary with all things straddling the line between religion and theatre, the Sufi singers are naturally in the line of fire, battling accusations and controversy almost all the time.

So a question presents itself; what criteria define what poems or pieces they’ll use? Sheikh Ashraf – a chanter and the ‘chief selections officer’ of the troupe – told us a bit more about the process. “You pick the ones your soul resonates with the most from the circles and bands you’ve participated with. I have a thing for my favourite poems from my childhood, and I remember always pestering the sheikhs about what the words meant, what the verses meant, what that was, what this was, etc. I still ask him questions today. It also matters that we pick the smoothest poems in terms of flow and simplicity for the audience. It all conveys our love for the Prophet, God, and his disciples.”

So what constitutes the key differences between a chanter and an encomiast (a person who praises or flatters something publicly)? “The chanter delivers the poems in both song and word, but not much understanding or insight into the matter. They operate on a harmonic basis more than an encomiast. Encomiasts actually live the things they preach, they have an innate sense of intangible sympathy for the air the poems spreads. It’s rare for a chanter and an encomiast to feel things on the same wavelength,” says Sheikh Ashraf.

As is customary with all things straddling the line between religion and theatre, the Sufi singers are naturally in the line of fire, battling accusations and controversy almost all the time. “Most of these objections usually pool up on our social media, and it’s usually one of two things. If it’s a matter of seeking clarification, and if it’s apparent that whoever’s asking is looking for an actual answer, a message of sorts, we have a sit-down and hash things out. Some folks, though, cherry pick a couple ‘suspect’ words and start tossing accusations of blasphemy. We usually ignore those or just wish them God’s blessing,” Nour laments.

Some folks, though, cherry pick a couple ‘suspect’ words and start tossing accusations of blasphemy.

You can see what each word and verse does to their hearts and minds, watching their souls sway with the music.

As it stands, Al Hadra are working on documenting and cataloguing everything they have to offer and putting it all in an album. This, obviously, is a time-consuming process, doubly so given that they have neither a financial nor an artistic backing to lean on. All of the ensemble’s members are independent units, relying only on themselves for all things financial, marketing-related or for support.

Despite these crutches, Alhadraa’s audience grows steadily day by day, and with every event, more and more from all backgrounds, age groups and creeds come pouring in. “One of the many things that puts a smile on my face is looking at the people in front of me," shares Tarek – another chanter. “You can see their emotional state in clear view. You can see what each word and verse does to their hearts and minds, watching their souls sway with the music. This is a pivotal aspect that enables me to enter the states of emotion I need to on stage.”

This article was originally published on our sister site El Fasla. 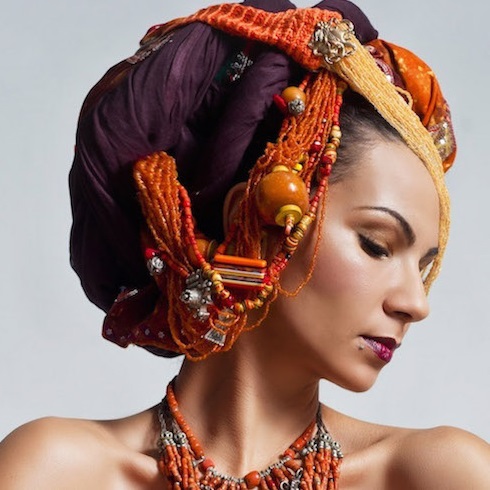 Oum is an acclaimed Moroccan singer, songwriter, and composer who fuses soul and...