Here are 9 DJs setting dancefloors ablaze around the world and giving us Arab music fans pride. 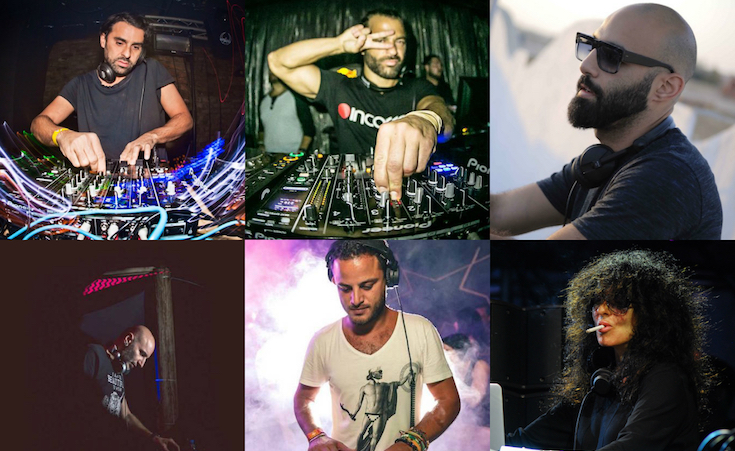 Artists of Arab backgrounds in the electronic music realm, much like anywhere in fact, seem scarce. But if you give in to the quality over quantity aesthetic of things, you’ll be pleased to find that most artists representing the Arab region across the globe offer, create, and curate music of the highest quality. Here’s a handpicked selection of 9 DJs spread across a spectrum of sub-genres who make the most ground-breaking tracks, captivate the hottest crowds, and kick ass while they’re doing it. Born to Lebanese parents in Lagos and having only lived in post-war Lebanon briefly, it didn’t stop her from making history (and headlines) with her infamous Trashy Renaissance parties. The raves Nicole organised over the rubble of bombarded mosques and churches were hailed as the introduction of electronic music to the Lebanese masses. Her career went through the milestones of being called 'the most underrated DJ' by Carl Cox early on, to being dubbed 'the queen of techno' by legions of fans. She runs her own label - Moods - out of London and is a guaranteed headliner in any techno oriented festival. Egyptian fans were lucky enough to catch her gig during Sahel season in the summer of 2016. Yousef is a name that needs no introduction; he is one of Liverpool’s most beloved party instigators and a global brand. His Circus imprint has hosted releases from virtually every known name in dance music today. It’s also credited the introduction of artists now considered house deities like Jamie Jones, Seth Troxler, and Eats Everything. He himself has released music on a host of major labels. Surprisingly enough many people don’t know the fact that Yousef is of Egyptian roots. French/Algerian artist Karim Sahraoui, perhaps known more under his Djinxx moniker has been releasing mouthwatering techno since 2001. After an abrupt - and thankfully for us brief - break up with the music industry, he returned to producing in 2014 with a mellower approach, thanks to the efforts of none other than techno founding father Derrick May. The Detroit royalty convinced him to leave the serene life of the Kuala Lumpur jungles and pick up where he left off with his career by releasing through his label Transmat records. Palestinian/American DJ and producer Maher Daniel has released some of the most memorable tracks we've heard in the last half-decade. His music has been featured on renowned labels like All Day I Dream, Souvenir, and Visionquest. He’s now based in Barcelona amongst some of the industry’s finest artists. Always busy touring and playing esteemed venues around the globe, he was gracious enough to bless the decks at our very own Zigzag in October 2016. Moroko Loko is the first party imprint that comes to mind when you think of Morocco. The man behind the concept is Amine Akesbi aka Amine K, a true icon of the Moroccan underground. Equally a DJ and an entrepreneur, he set out to curate events for the real party-goers, promoting his own brand and inviting international promoters to Marrakech. The brand has since developed into a cross-continental phenomenon, setting up in locations everywhere from France to Japan. Amine as a performer is much sought after as well, he is constantly touring Europe and the Americas and playing alongside the most esteemed and international underground names. A music lover first and foremost, Fady Ferraye is a legend in both Lebanon and Europe. His tracks received mythical support from the likes of Sasha and Hernan Cattaneo to name a few. Hurly Burly - his signature club night - is regularly hosted in venues from Club NL in Amsterdam to B018 in Beirut. Although based in the Netherlands, he is one of the prime contributors to the growing scene in his homeland where his sets across the country are sought after by local crowds. Ahmed ElRaghy, aka Raxon, is an Egyptian born and raised in Abu Dhabi. Starting out as a resident spinner in Dubai, he gained notoriety when his remix was announced winner of a Beatport remix competition for Nick Curly’s Underground in 2012 out of several hundred entries. He was also voted Best Dubai DJ for 2013 and 2014. Ahmed has since moved to Barcelona and built a solid career studded with releases on Tronic, Noir, Suara and Sincopat. Lebanese/German Anthony Attalla is a name widely associated with house music only lately. Although based in Chicago, he hails from Detroit and is deeply influenced by the techno heritage there. He has remained in the shadows for a good part of the last decade only to shine through with releases on Yoshitoshi, Great Stuff, and his own imprint Incorrect which is slowly becoming a staple taste-maker in the industry. Egyptian Rami Abousabe and Jordanian Tamer Malki, collectively known as Bedouin are a Brooklyn-based duo. Debuting only in 2014, they were set on sharing their Arab patrimony through their name and music. Their deep house grooves have an unmistakable oriental twist, be it collaboratively or through Tamer’s solo work. They’re quickly proving to be a name to be reckoned with in dance music today.