We sit down with Lama Ghobar, the co-founder of Malath: Canaan Rescue Jordan, an NGO dedicated to rescuing, rehabilitating, and re-homing local dogs who have been abandoned or abused. 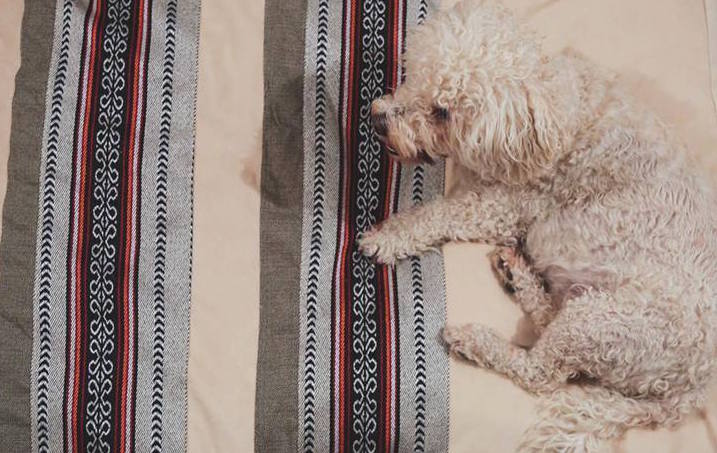 Lama Ghobar, the co-founder of Malath: Canaan Rescue Jordan, an NGO dedicated to rescuing, rehabilitating, and re-homing local dogs, is describing just some of the cases she has saved in the past year. “The amount of abuse animals face in Jordan is insane,” she says sadly.

She and co-founder Wassim Ghantous, started Malath (which means ‘sanctuary’ in Arabic) four years ago in a bid to try and do something about the myriad abused strays in Jordan. Together with a handful of volunteers, they focus on rescuing the most severe cases, fostering them - often in their own homes - until they can be adopted either in Jordan or overseas in the US. “We wanted to focus on our national breed because, ironically enough, it’s not at all desired in this country,” Ghobar explains, “We try to rescue the really injured ones, the ones that need you the most.”

Like in many Arab countries, the local dog breed – the Canaan in Jordan – is looked down upon and often faces the most abuse in the streets. A lack of education coupled with cultural stigma is not only what leads to the horrific treatment of stray dogs but also, even after rescuing, prevents them from finding a home within Jordan. The dogs Ghobar has rescued stay at her home for around two to three months before she can find someone to adopt them, and even then, it’s often expats residing in Jordan or people in the US, to whom she sends the dogs overseas. “It’s sad to say, but I still don’t believe dogs belong in the Middle East,” she says, “If you go into the rescuing world you’ll lose your mind.” Lama Ghobar pictured with Zahra, a stray she rescued, before and after her rehabilitation.

At its core, Ghobar believes that a cycle of abuse is potentially the reason many children end up being the primary culprits when it comes to torturing stray animals. The upbringing of these children, many of whom come from an underprivileged background, is what leads them to eventually abuse strays. “Thousands of dogs are tortured by children. I think it’s because abuse is rampant within their own lives – a lot of villagers in Jordan beat the child out of their mind. So the child will then take it out on a dog or someone weaker,” she explains.

It’s sad to say, but I still don’t believe dogs belong in the Middle East. If you go into the rescuing world you’ll lose your mind.

There also exists a pervasive fear of dogs among many in the Arab world, which may not lead to their torture, but certainly leads to their death in droves, as people view them as an active threat and feel the need to protect themselves against them. “When I walk my dog – and he’s small! – people will cross to the other side of the street,” says Ghobar, who also lives in a comparatively upscale neighbourhood, where cultural stigmas are often thought to be less prevalent than in low-income rural or urban areas. Authorities often respond to a one-off attack by a dog by going on a killing spree and shooting them by the hundreds, and citizens themselves often take matters into their own hands. “It’s happened that people poison their neighbours’ dogs in their garden. And there’s really nothing you can do.” Of course, a cultural and religious aspect often comes into play regarding the issue of dogs in the Middle East, which in turn becomes a huge hindrance to finding homes for animals that need adopting. “Dogs are perceived as dirty and impure,” explains Ghobar in reference to a common thought that prevails in Islam which suggests that dogs are unclean. This belief is often perpetuated and intensified when the basics of the religion are taught. “The culture of having a dog is still difficult in the Arab world. People are torn in terms of religion; many of them believe dogs are not allowed in the home.” Those who do not adhere to this school of thought are often more interested in buying purebred dogs from a pet store, instead of adopting injured local strays.

Ghobar relies primarily on social media posts where people share photos and locations of animals in need on Malath’s page – after which she or another volunteer go to pick them up. But aside from a few volunteers, she is largely alone in doing this, due in part to the fact that though people want to help, they don’t want to actually foster the animal afterwards. “People are willing to help as long as they know where to take the dog. They don’t want to keep it.”

Because of the pervasive negativity swirling around the Canaan dogs in their home country, Ghobar often fosters up to five animals herself in her small apartment, and looks to homes in the States to adopt her foster pets. After quitting a corporate career to focus on rescuing strays, she needed a way to fund their care and the cost of sending them overseas. “What do you do if the dog stays in your house and doesn’t get adopted?” she asks. She created Bonjojo in 2015, a small local brand for dog accessories, enlisting the work of underprivileged Jordanian women to craft the pieces.

Thousands of dogs are tortured by children. I think it’s because abuse is rampant within their own lives – a lot of villagers in Jordan beat the child out of their mind. So the child will then take it out on a dog or someone weaker.

“I raise funds for every case that comes into my house but eventually I needed a more reliable and steady source of income,” she explains of her startup, whose  pieces she sells locally and online, through sites like Etsy. Since her rescue efforts focus on cases that need a lot of medical attention, the accompanying costs are much higher than were she simply paying for spaying and vaccines. “A huge percentage of the profit goes to medically treating the cats and dogs I foster, and then sending them to the US,” she says, “The pieces are handmade by women in Jordan who often can’t find employment, so in this way, they also get paid fairly for their work.”

Affecting change, however, is a slow process; Ghobar cites a local shelter, where only 3 out of 70 dogs have been adopted in the past year, and various ignored petitions to the government since lawmakers care little for the plight of stray animals. But its solution, she believes is getting to the root of the problem; an alteration of the Jordanian mentality towards animals. “We need a proper spaying and neutering programme but more than that, there should be a reform in the school curriculum – in public schools especially. They should talk about animal welfare, because if a child is compassionate towards animals, then they’re compassionate towards everyone. Schools play such a pivotal role in a child’s mentality,” she argues. But despite the trudging pace of change, it is happening. People still constantly share locations on Malath’s page of where to find and help abused strays and though there isn’t a plethora of homes ready to take in strays, they do exist. “There are a lot animal lovers in Jordan who foster – and their homes are already full,” Ghobar shares. And currently, the NGO are looking to open a shelter in the near future, to help house all the strays that do not find adoptive homes. “I would hope one day that I have a top notch shelter – not a shelter, but a sanctuary,” she emphasizes.

And despite everything, with the efforts of one NGO alone, and a foster-based network of volunteers, they manage to send 15 to 20 dogs abroad yearly, and find homes for around 20 dogs nationwide; dogs who were abused within an inch of their lives and left to die; dogs who are now healthy and have a home. “I’m just going to keep doing what I’m doing,” Ghobar concludes, “Change will happen. It might not be in our lifetime, but we still need to try.”