In a time when the word ‘influencer’ is redefined to refer to foodies, fashionistas, and beauty and fitness gurus on social media, Aya Aghabi is blogging and carving her own space on the web to make Jordan wheelchair accessible; creating, in effect, real influence. 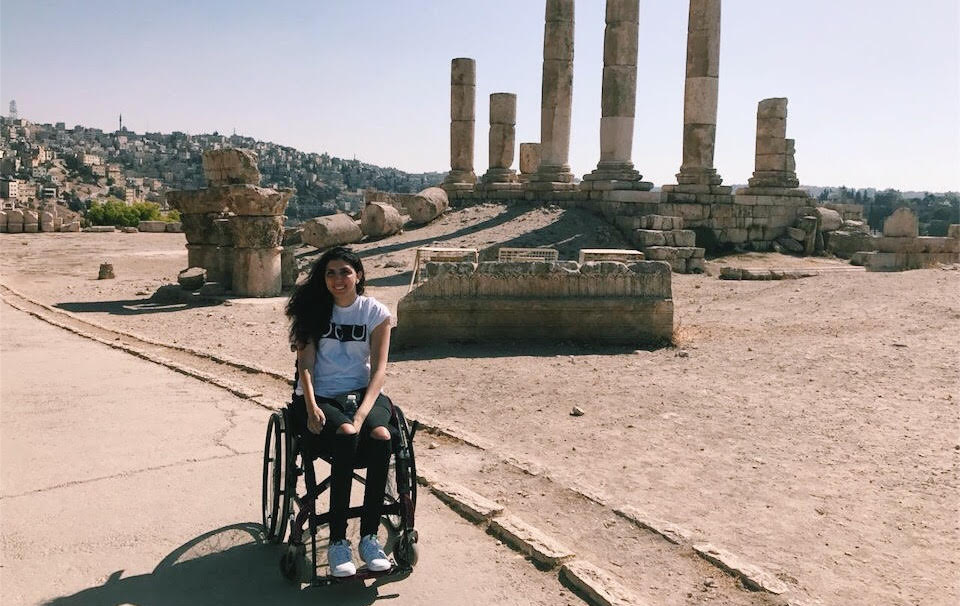 Update: Since the writing of the article, Aya Aghabi has since passed away, in August 2019 at the age of 28. The young humanitarian's legacy and work will live on however. During her lifetime she revamped over 70 sites to make them wheelchair accessible, including restaurants and banks, and the organisation which she founded, Accessible Jordan, continues to carry out the mission she started.

All Aya Aghabi had to do to capture the attention of restaurants, hotels, embassies, travel agencies, and media contacts in Jordan, was post a link to her website Accessible Jordan, an online guide to all places accessible around the Kingdom, in a Facebook group for Arab female entrepreneurs.

“Is this real life?... I can't believe all that's happened in the past seven days and how much people have started talking about the issue of accessibility,” Aghabi writes in a post on  Accessible Jordan’s Facebook page, one week after launching her website. “I've had restaurants and hotels contact me about building ramps and improving their accessibility, international and local tour guides emailing me about using Accessible Jordan for future trips, embassies sharing the website, and more!”

I too jumped on the bandwagon and reached out to Aghabi to learn more about her story, the support she’s received so far, and the challenges she anticipates to face. “Where were you all before? Why did no one seem interested in accessibility?” Aghabi jokes as I walk into one of Amman’s accessible cafes, where we planned to meet, just as she was wrapping up another interview with a local journalist.

Aghabi tells me that she isn’t surprised with the Jordanian public’s apathy towards accessibility. “Other than the occasional street beggar using a wheelchair to gain people’s sympathy, I hardly notice any people on wheelchairs out and about in Amman, do you? I mean If you’re not dealing with the challenge and it’s also out of sight, it won’t occupy your mind,” she elaborates. “Segregation starts at the school level. Traditionally, students with disabilities are placed in separate schools. This approach isolates disabled students from their communities, which also means that children grow up without being exposed to diversity and without a complete understanding of the community we live in.”

Segregation starts at the school level. Traditionally, students with disabilities are placed in separate schools. This approach isolates disabled students from their communities, which also means that children grow up without being exposed to diversity and without a complete understanding of the community we live in.

The 26-year-old admits that had her life’s circumstances been different, she might not have given the issue of accessibility much attention either. Growing up, Aghabi dreamt of pursuing a career that would have her travelling frequently across the globe. It was the summer of her high school graduation that changed everything, but not the typical way a high school graduate would expect things to change.

After surviving a car accident in 2009, Aghabi was left with a spinal cord injury that rendered her lower body paralyzed and her movement confined to a wheelchair. She then spent a year in treatment at a hospital in Germany, before moving to California to pursue a Bachelor’s degree in International Development at UC Berkeley. “Navigating my way on a wheelchair in Berkeley was relatively easy; in addition to the supporting infrastructure, all the accessibility-related information that I needed to plan my outings was readily available online,” she explains.

After surviving a car accident in 2009, Aghabi was left with a spinal cord injury that rendered her lower body paralyzed and her movement confined to a wheelchair.

Aghabi didn’t realise the dire need for resources on accessibility in Jordan until she returned to settle back in Amman with her parents. “Planning my day became additionally and unnecessarily difficult. I would spend hours on Google going through images and looking up wheelchair accessible facilities in Jordan” she continues. “I would have to call place after place to ask if they have stairs, ramps, elevators and accessible toilets. I became the go-to resource for accessible places around town among my friends and colleagues,” she says proudly.

Motivated by her desire to make it easier for people to find all the accessibility related information they need to plan their outings, Aghabi decided to turn all the information she collected into a website and to blog about her experience and the challenges she faces, as a wheelchair user, visiting different places around Jordan. “There are many accessible places that people don’t know about, which means that most wheelchair users end up being stuck at home,” she explains.

In fact, the idea for her website and blog was sparked after multiple conversations with her boss, who would always ask her for recommendations on accessible places to take a friend of his who is also a wheelchair user. “But it’s not just people on wheelchairs that benefit from having accessible facilities - anybody can break a leg! And let’s not forget the elderly and parents that have children in strollers,” she adds.

...my experience so far has made me realise that when it comes to our country’s development, we shouldn’t always wait for change to come from the top. We can create significant impact by taking the initiative ourselves.

A self-described results-oriented person, Aghabi tells me that when she launched Accessible Jordan, she didn’t expect to see an immediate impact. “But my experience so far has made me realise that when it comes to our country’s development, we shouldn’t always wait for change to come from the top. We can create significant impact by taking the initiative ourselves,” Aghabi says confidently. “That’s one of the main messages that I want to get across to the public.”

Aghabi’s approach is innovative and striking in its simplicity. ‘Why has this not been done yet?’ has been the most popular response she received. “I think it’s because people look at the challenge and think of big solutions, then get overwhelmed by the scale of the problem and the required investment. We tend to overlook low hanging fruits,” she explains. “That’s another point that I try to highlight in my posts; I want to show people that solutions can be relatively inexpensive and easy to implement.”

We discuss other initiatives that tried to raise awareness around accessibility in Jordan, yet failed to receive much support or attract public attention. When I asked Aghabi why she thinks she succeeded in arousing public interest, she commented: “I think the fact that I’m highlighting and praising accessible places rather than throwing blame around is playing a role in motivating people to take positive steps.”

Aghabi is grateful for the support of Prince Mired bin Ra’ad, Head of the Higher Council for the Affairs of Persons with Disabilities, where she works. She also says that she’s keen on collaborating with other government bodies including The Greater Amman Municipality and the Ministry of Tourism. “I received a few positive comments on social media from ministers and government officials, but nothing formal yet,” she adds.

Making Petra and Wadi Rum accessible is the dream.

Accessible Jordan has also received interest in collaboration from a couple of International NGOs operating in Jordan. “I’m thrilled by the prospects, but I would hate for this work to be completely championed by International Organisations. We have the brains and the capacity to do the work,” Aghab says with a sense of national pride.

After all, putting Jordan on the accessibility map is a collaborative effort whose responsibility cannot lie on one party or sector alone. “Yes, the private sector and NGOs can make a significant impact, but the government still has an important and essential role to play,” Aghabi emphasizes. “We may succeed in encouraging private sector businesses to build ramps and install elevators, but what about the sidewalks, public spaces, hospitals, schools, historical and touristic sites?”

We can only go so far without a clear regulatory framework for accessibility. Aghabi shares with me stories of instances where private efforts have conflicted with government regulations. Like the time a local grassroots organization raised funds to build portable ramps at the Roman Amphitheatre in downtown Amman - a historical hub for cultural events at the heart of the city. The ramps proved useful for a summer of events but were eventually removed because they didn’t meet the approved safety specifications. “There is vagueness around these regulations and where one can find them,” she exclaims.

People are surprised when they find out that I work two jobs and run Accessible Jordan on the side. They’re like: ‘oh, you’re smart!’, as if having a physical disability diminishes your mental capabilities.

From Aghabi’s perspective the future of accessibility in Jordan is promising, especially with the passing of the new Law on the Rights of Persons with Disabilities for 2017, which cites that buildings, public and private, as well as tourist locations, must provide accessibility to people with disabilities. “Strict enforcement of such laws is needed, so are heavy fines for those who fail to comply,” she adds.

As for her future plans for Accessible Jordan, Aghabi talks about launching an Arabic version of the website to reach a wider audience and creating a streamlined app for easier access on mobile devices. She also mentions her desire to get people on board to form a team at a later stage.

We talk about her fears and challenges. She tells me that her biggest concern is that excitement for her initiative will fade away with time. Her main challenge, at this stage, is reaching the underprivileged areas in Jordan to raise awareness about accessibility and rights of people with disabilities. There is also the issue of managing her own time and covering the expenses of her site visits. “There is only so much that I can do on my own, and there are many sites that I’d like to visit and write about, not just in Amman, but all over the kingdom,” she says excitedly. “Making Petra and Wadi Rum accessible is the dream.”

“People are surprised when they find out that I work two jobs and run Accessible Jordan on the side. They’re like: ‘oh, you’re smart!’, as if having a physical disability diminishes your mental capabilities,” she says sarcastically. “This negative cultural perception towards people with physical disabilities goes back to the point I mentioned earlier regarding segregation at the school level. The importance of inclusivity in schools is something that I aim to raise more awareness around” she concludes.

Since our meeting in September, Aghabi successfully managed to collaborate with restaurants, schools, banks, embassies, not-for-profit organizations and research centers to help them take steps towards making their facilities accessible for everyone.

She also met with several school administrators that are taking measures to include more disabled students and student-led initiatives that aim to tackle the issue of accessibility at their schools and universities. Accessible Jordan has also received funding from UNESCO’s NET-MED Youth Program.

more articles from this writer
Previous Article
Next Article

This Dreamy Egyptian-Made Brand is an Organic Beauty Wonderland and It's All the Rage in the U.S.