The second piece on Syrian teachers' commitment to keeping education alive under ISIS uncovers their work on healing the broken social fabric left behind. 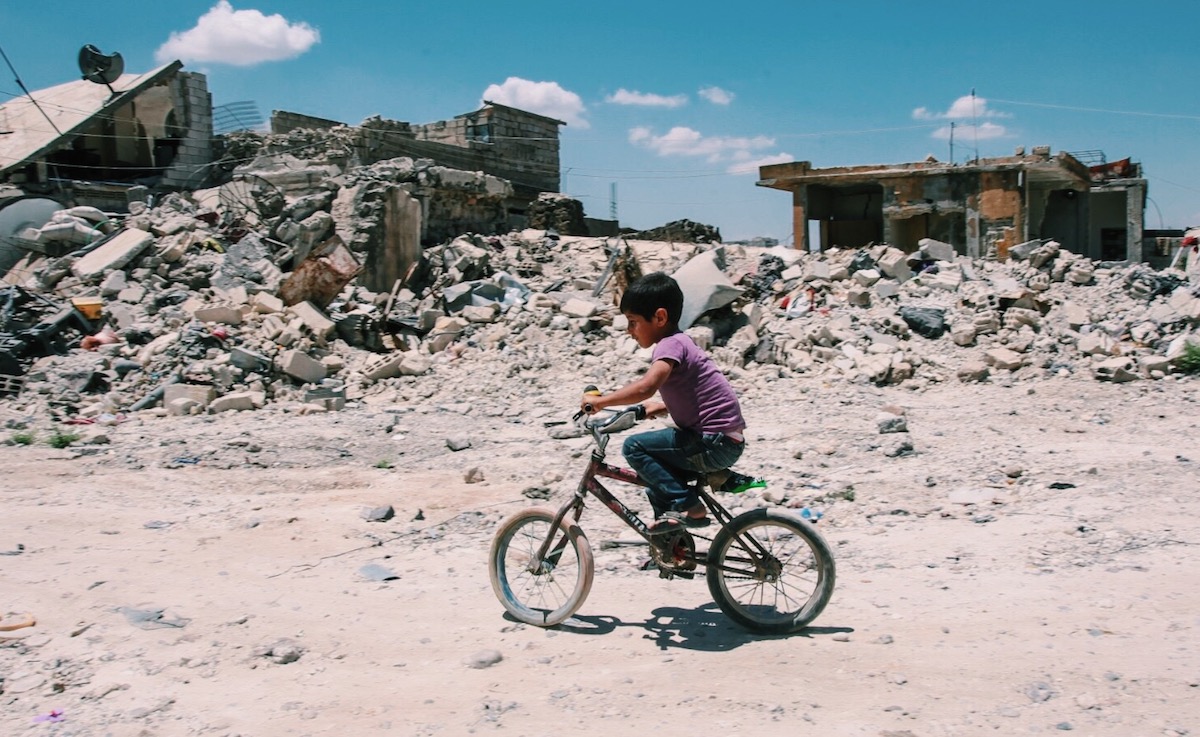 In the first part of Syria's Lost Generation Isn't Lost, we broke the story of the underground cell network of teachers that kept education alive in ISIS-controlled Deir Ezzor in eastern Syria, through death threats and years of violence. After the fall of the last ISIS strongholds in Syria last month, communities in liberated areas are beginning to rebuild, and wonder what it means to heal from the years of collective trauma left behind.

When ISIS leaves, they leave both the homes and their people in ruins.

After three years of occupation, Deir Ezzor has been left with a crippled infrastructure, education system, and people. “When ISIS leaves, they leave both the homes and their people in ruins,” says Lamiaa Suleiman, the Deir Ezzor-born author and educator who founded both Khotowat, the initiative secretly educating children under ISIS rule, and Bedaya, the organisation currently working in education, psychosocial support, and post-ISIS re-socialisation in Deir Ezzor.

In the last few months of Khotowat's work, they focused on re-socialisation of displaced children, including through workshops such as this one which had children making scale models of destroyed or damaged Syrian landmarks, including the ruins of Palmyra, the Umayyad Mosque in Aleppo, and the Deir Ezzor suspension bridge.

Currently operating in Abu Khashab refugee camp in Deir Ezzor, Bedaya has been educating 500 formerly-illiterate children since August 2018, recently adding 250 more children between the ages of 6 and 13 in March. Their staff, averaging 90 educators, administrators, and psychosocial specialists, has largely been involved with the organisation since the days of Khotowat, all through ISIS’s occupation.

90% of children in ISIS-liberated areas are illiterate.

Their work now consists of battling illiteracy, as Bedaya’s evaluations show that 90% of children in ISIS-liberated areas are illiterate; psychosocial support with a focus on the arts; and battling the deeply-entrenched fundamentalist ideology that ISIS had propagated for years. To ensure its own posterity - to win the war, not the battle - ISIS had made sure to place a heavy focus on socialisation, explicitly targeting children. In addition to the industrial scale child abuse that took place in indoctrination camps’ training children as young as 6 to become militants - some of whom were sent on military operations - ISIS also focused on the society itself. Through ISIS-approved curricula in schools, students were encouraged to spy on their parents and relatives and report infractions. In a 2015 year-long report on ISIS propaganda, Vice researchers John Horgan and Mia Bloom described the systemic gradual socialisation also took place through public events, in what they call a ‘macabre ice cream truck’ of luring local children to public events with toys and candy. These events were often public showings of videotaped executions or public executions themselves.

When we start working with them, the child doesn’t have it in them to deal with the world. It takes so much to slowly convince a small child to say ‘hi’.

“Eager to see what's going on,” Horgan and Bloom found, “[children] push through rows of adults to reach prime viewing positions for the graphic violence to follow. The visible reaction of some children to beheadings is simultaneously one of revulsion and curiosity. They are told by IS [ISIS or the Islamic State] why the punishment is meted out, and thanks to the routine spectacle of such events, they soon consider normal what IS does to those who commit infractions.”

It is the effects of this violent socialisation - collective, traumatic, and irreversible - that Suleiman and her team are addressing now. Despite the prevailing rhetoric of ‘the lost generation’ - which refers to the still-growing population of displaced, illiterate Syrian children - the term asserts a darker teleology than the reality on-ground. It is “a generation at risk, but not yet lost,” says Katie Murphy of the International Rescue Committee. “Children lack the emotional defense mechanisms that adults have, so of course they’re more heavily affected by their environment,” Suleiman says. “But we’ve seen that with the same speed that a child has been affected by the violence, coercion, and fear around them, they have an equal disposition to heal.”

In addition to lacking the emotional defense mechanisms that might (only relatively) protect an adult from the psychological effects of violent occupation, children also lack the capability to actually know the trauma that has swept their home. The impressionability of children is perhaps best illustrated by an interaction Syrian psychiatrist Mohammad Abo-Hilal - founder of Syria Bright Future, a Jordan-based NGO offering mental health support to traumatised Syrian children - had with a five-year old refugee in a camp. Hillal relays that, upon handing him an apple, the child's response was: “What is this? Is it a bomb?"

In 2017, when ISIS began to lose control of Deir Ezzor, an 8-year old would have spent half of their lives under their regime, and would likely not have any memory of life before. Without a frame of reference, a child cannot understand that their current life under ISIS is not 'normal' "In every sense of the word, a child under ISIS has no idea what’s happening around them," Suleiman says. "Because the violence is more than even adults can understand and wrap their heads around, can you imagine how it is for a child?"

In spite of - and perhaps exacerbated by - this inability to intellectualise their trauma, the children that Bedaya begins helping exhibit a range of emotional issues. To the question of what they are coming in with, Sueiman responds: "Everything you could think of that could happen as a result of trauma in war. We have children who suffer from isolation, we have children with behavioural disorders, we have children who are violent and bullying, or whose psyches are completely defeated."

In the first few days of a child’s arrival into the centre, Bedaya’s facilitators and educators only focus on pure fun, small exercises that put no pressure on the kids, and spaces to speak only if the child wishes. This is because, as Suleiman describes, though children aren’t often capable of wrapping their heads around the violence they’ve been exposed to, they usually come with psyches that have been completely destroyed. “When we start working with them, the child doesn’t have it in them to deal with the world,” Suleiman explains. "It takes so much to slowly convince a small child to say ‘hi’. It takes far more to convince the child - or to do something that would somehow get them to - smile." One unexpected aspect of Bedaya’s resistance against the residues of ISIS control is its focus on arts, and it illuminates a critical chasm in society today. Though most parents had refused en masse to send their kids to ISIS-approved schools and camps, preferring their children’s total illiteracy to the threat of radicalisation, some children were sent into the throes of ISIS by fundamentalist or extremist parents.

Suleiman says that there are still conservative, fundamentalist mothers in the camp today, and it is through them that she ultimately gauges Bedaya’s success. “Having their children in our programs in the camp is a priority. We have an ethical responsibility for them most of all. It’s not their fault that they ended up here, indoctrinated with fundamentalist religious ideology.”

One arts workshop inside Abu Khashab consisted of drawing on tents and walls in bright colours and sketches in collaboration with a visual artist. This in spite - and because - of how fiercely ISIS had banned all forms of artistic expression as apostasy, an infraction that merited violent sentencing. When some of these women were swept up in the positive atmosphere, they had their children join the workshop, and joined themselves. This, in the same society, only a few months before, a headmaster was publicly lashed for allowing one of his teachers to wear nail polish. In the same communities where children were taught the foundations of ISIS fundamentalism - extremist misinterpretations of Islam, hatred, intolerance, violent jihad - Bedaya is incorporating their experience in children’s literature to produce a counterculture, publishing and distributing hundreds of books that teach coexistence and nonviolence.

We provide psychosocial support to over 700 children now. But what about the tens of thousands of children all over Syria, that we can’t reach?

“ISIS worked hardest to consolidate a deep-rooted hatred and intolerance, to completely reject the other, that everyone who’s different is an infidel,” says Suleiman on the danger of the ideological residue left behind after the occupation. “ISIS is only one form of extremism. It could disappear today, and another one pops up tomorrow. The issue today is to starve the very source. To protect these children from the aftershocks of extremism left behind.” Suleiman describes how, nearly six months after the first children joined them in the centre in Abu Khashab, they can see the children start to regain healthy lifestyles, and rebuild social connections. The children who have developed conditions and disorders that require medical intervention are relatively few in number, and referred to professionals as needed. “There’s not a single mental health professional in Deir Ezzor - now or before the war - but we connect them online.”

Every single person on our team has had a family member either murdered or abducted, or are themselves displaced.

There’s an important quality to Bedaya’s work that both elevates and weighs it down. Every single person working in the organisation - educators, facilitators, artists, psychosocial specialists, and administrators - are natives of Deir Ezzor, and have themselves lived through the years of collective trauma they are now helping children heal from. “Every single person on our team has had a family member either murdered or abducted, or are themselves displaced.” In their particular iteration of humanitarian work, the separation of their own trauma from the children’s often proves difficult, despite Suleiman and her administrative team offering mental health support to anyone in need. “There’s not a single home in Deir Ezzor that has not faced detention, or murder, or some form of oppression and coercion,” continues Suleiman. “From something as basic as the effects of constant social control and surveillance, to public execution, to constant fear of abduction. Of the friends and family we’ve lost, we’ve only received news of the confirmed death of one person, of others there has been no news for years. And then when [our educators] go to work, the sheer amount of pressure and violence the children are living under - it undoubtedly leaves an emotional scar.”

As Suleiman describes the prevalent sense of despair in the community, she speaks of a collective helplessness. That what started as a revolution for a better society has turned into endless cycles of violence, perpetuated by powers far larger than themselves. Bedaya is part of a vanguard of initiatives and communities proving that a history of a people does not end with the horrors inflicted upon it by occupation, but there remains a heaviness on Suleiman and her team. “We provide psychosocial support to over 700 children now. But what about the tens of thousands of children, all over Deir Ezzor, all over Syria, that we can’t reach? No matter what we want to do, we don’t have the ability to reach any more children, and that weighs on every single one of us.”

You can keep up with Bedaya's work on Facebook. 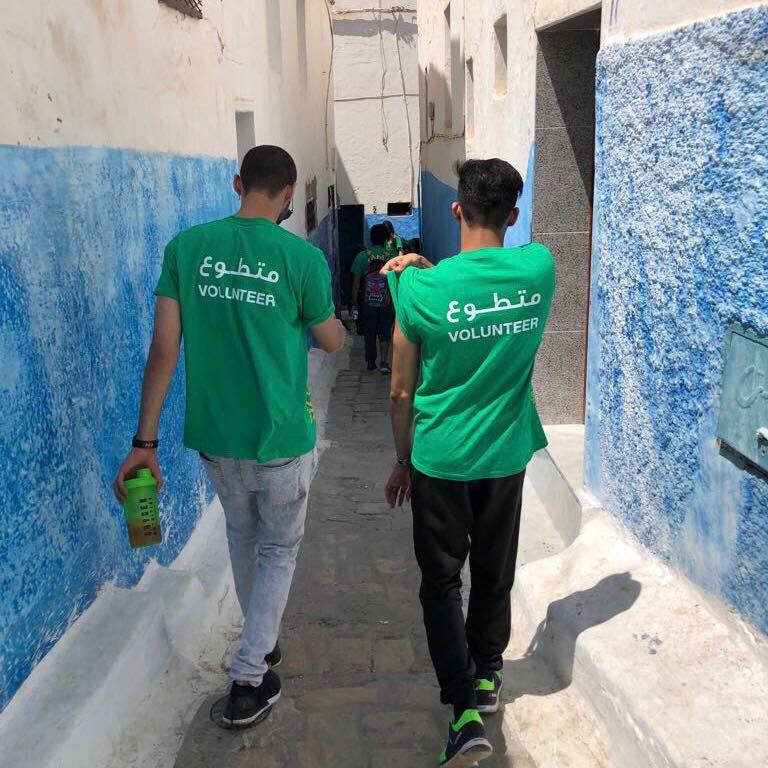 Kuwaiti NGO LOYAC has worked for 16 years to set the MENA region’s youth on the...