"Shelter is not a product. It is a cultural and social practice." 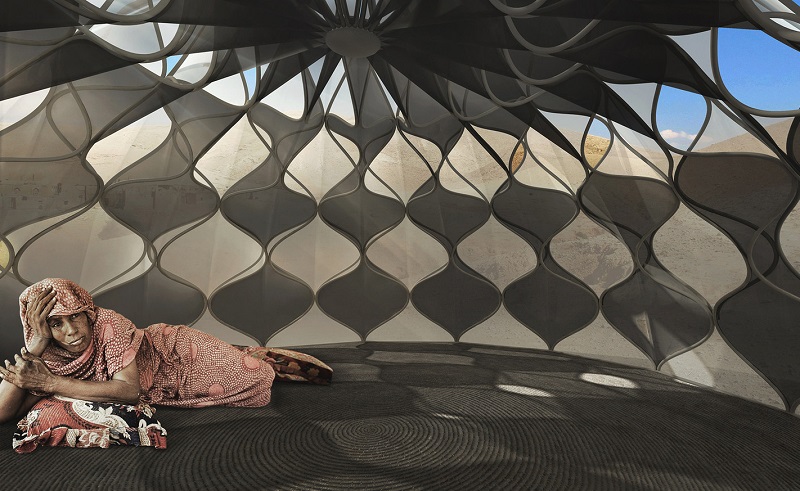 A woman holds a goat by the horns, gently, while another takes a pair of scissors to its hair, cutting all of the excess, letting it fall to the ground in heaps. A few moments later, she begins to coax the hair, tapping it with two wooden sticks, then knocking the sticks together three times, tap, tap, tap, and with her knowing hands, she twirls the hair gently around the stick, and begins to make the weave of hair into tight knots. When the women start weaving the knots of hair together to make a large, patterned tapestry which would then form a liveable tent, they sing.

...the ‘invisible architects in a patriarchal system' – a reference to the historical silencing of women’s roles in constructing and structuring these homes for their tribes.

Those are the intimate moments that go into the making of beit el sha’ar, a traditional tent made by Bedouin women, who Jordanian-Palestinian designer and architect Abeer Seikaly calls the ‘invisible architects in a patriarchal system' – a reference to the historical silencing of women’s roles in constructing and structuring these homes for their tribes. Those scenes of the making of beit al sha’ar were part of a video Seikaly made, which she titled Matters of Time. The architect is also, more famously, behind a tent-crafting project that comprises of innovative, collapsible domes for refugees - a project which she now calls Weaving a Home. For this project, which won the 2013 Lexus Design Award, she delved into a years-long research process into traditional methods of tent-making such as what she documented in Matters of Time, and a deeper, more general exploration into what makes a home, and what makes a shelter, in a time when both are absent for many, including those in her most direct surroundings; refugees in Jordan.

I tried, within the project, to develop the dome based on the requirements and needs that I felt were missing with current [refugee] camps.

The dome she conceptualised is made out of a collapsible structural fabric that can expand and enclose to adapt to different weather conditions, and whose external structure creates conduits for the provision of services such as electricity and water. Also making use of the searing desert temperatures to which refugees are usually exposed, the honeycombed structure can absorb solar energy, which is then transformed into electrical power stored in specialised batteries, helping to provide electricity at any point in time. Prototypes of the self-structuring tent. Photo courtesy of Abeer Seikaly.

“At the time [I worked on this project], there was a peak in the refugee crisis in Jordan, and the Zaatari camp had just opened. We see this stuff on TV all the time, but when you actually experience it, when you go and visit these camps and witness the conditions that people live in… it really hit me hard. So I tried, within the project, to develop the dome based on the requirements and needs that I felt were missing with current camps.”

...it’s not about providing shelter to a community so they can survive. How do you work with a community instead, to design and build the shelter with them using local resources and materials?

Jordan is currently home to the second highest demographic of refugees per capita in the world, most of them Syrian. 16% of this population live in camps. Zaatari camp, in turn, is one of the largest refugee camps in the world, housing 80,000 Syrian refugees, and even becoming termed "Jordan's fourth biggest city." The camp's infrastructure, however, is nowhere near equipped for its increasing number of residents - the water lacking, shelter and maintenance debilitating, and proper healthcare almost nonexistent. Zaatari Camp is the largest refugee camp in Jordan, and one of the largest in the world. Photo courtesy of Oxfam.

"I realised, later, that we need to think about shelter in a different way. It needs to be a dignified shelter, where it provides basic needs of contemporary life,” she continues. This idea of a “dignified shelter” forms the crux of her work for the past years on the project, and the cornerstone of her other works, including Matters of Time, which all pour into Weaving a Home.

We see this stuff on TV all the time, but when you actually experience it, when you go and visit these camps and witness the conditions that people live in… it really hit me hard.

Her work, most importantly, focuses on working with – and for – communities, and is premised on the idea that community should be at the core of home-making in the Middle East, because that is how it had been for centuries, and it’s what the fabric of society in these countries was built around. Yet, in contemporary times, with the refugee crisis giving way to flimsily structured, temporary settlements, and on the other side of that coin, a so-called “booming” modern real estate industry, that sense of community remains a strikingly present absence.

Meeting Points, a design project Seikaly presented in Amman Design Week (which she had co-founded in 2015), addresses this issue of community. As part of the evolution of the larger project of Weaving a Home, Meeting Points presents the most recent version of the self-structured and eco-friendly fabric that will make up the walls of the tent. After discovering the environmental – as well as social – benefits of the traditional practice of Bedouin women’s beit al sha’ar first-hand, Seikaly collaborated with 58 Jordanians from around the country – 40 of whom were women, many Bedouin – hailing all the way from Amman and Madaba to Al-Mudawwara, to work on a material deriving from these practices, and that provide a stepping stone for creating the tent. Meeting Points is Seikaly's latest design project, made with the contribution of 58 Jordanians - many of whom are women. The self-structuring tapestry constitutes the same fabric/structure that will constitute the walls of the tent. Photo courtesy of Edmund Sumner for Architectural Digest Middle East.

“I’m very interested in earth materials. One of the questions I’ve been asked is what is technology [and its role in design], and our view of technology is, I feel, very limited. The women who made the tents, honestly, that’s technology. It’s just unbelievable, the way it responds to the environment, the way it integrates with their lifestyle, with their survival. That’s technology for me,” Seikaly says.

With the group’s physical labour and their inherited centuries-worth of knowledge, including that of useful, innovative and environmentally conscious materials, the product of their efforts was a self-structuring, porous, pliable and handknit tapestry. The tapestry is made of earth materials – including goats’ hair – and, what Seikaly considers to be just as rich a source, the communal – and intuitive – effort of the collaborators, that enable ‘meeting points’, hence the title of the piece.

Those meeting points are between one material and another – combinations that make it possible for it to be a self-structuring fabric tapestry – and, in parallel, between people from different walks of life. These parallels – between nature and architecture, life and material structures – mark a shift in Seikaly’s vision of the purpose these tents will serve. “[Back then] I was so excited. I had won this award, I was like, ‘I need to develop this and distribute it and help people’. But then I realised things are more complicated than that. As I immersed myself in this process of development, I realised that shelter is not a product,” Seikaly says. “This is not about designing something and mass producing it and selling it, which is kind of what I had in mind, of course with the humanitarian intention. [Rather, shelter] is a cultural and social practice, where it’s not about providing shelter to a community so they can survive. How do you work with a community instead, to design and build the shelter with them using local resources and materials?”

That approach is also motivated by her desire to counter a commonly perpetuated narrative in Jordan, of the country being “resource-poor.” When Jordan features in most development “evaluation reports,” what is most often cited is its lack of energy resources, its food deficit, and its shortage in agricultural land.

...her desire to counter a commonly perpetuated narrative in Jordan, of the country being “resource-poor.”

“First of all, how can we talk about ourselves as being poor? That by itself is a debilitating idea, in terms of advancing ourselves as a society,” says Seikaly, adamantly denying the validity of these statistics. “The Nabateans [who settled in modern-day Jordan between the 4th century BC and 1st century AD] created water systems in the midst of the desert 2000 years ago. And we have an abundance of animal fibers, wool, goat hair, camel hair. What are we doing with those? We’re burning them; that’s what we’re doing.” An archival photo of Jordanian Bedouins' beit al sha'ar, with a woman at the center of its architecture. Photo courtesy of Library of Congress.

Those resources are integral parts of her research with indigenous and Bedouin communities, in her attempt to move forward with Weaving a Home but in a way that disrupts the conventional path of business plans – in a way that does justice to the communities for whom these tents are intended. “When we talk about indigenous people and the problems of indigenous people today, this is not just specific to the Bedouin tribes, this is specific to the Māoris in New Zealand, the Aborigines, to all sorts of indigenous people, so I think that my practice and work is becoming more and more specific, but also at the same time, more general in terms of them being part of global causes.”

Weaving a Home now encompasses all of these different, smaller projects in hopes of becoming large enough to work for multiple displaced communities, instead of one, and for becoming more than just a temporary solution in the form of a tent. As she describes her work, she maintains a hopeful and open-minded demeanor towards her project, and that is that it will happen in due time – and she is currently working on and filing for a patent after successfully creating a prototype – but until that time comes, it is important for her to figure out how this can become more than a shelter; how the tent can become a home. And her partial answer to a partial question was: to let the community work on the project themselves, and not have to have it become just another project designed by just another star architect.

For updates on Abeer Seikaly's work, and for more information, you can visit her website.

The world's largest mirror-clad building, the Maraya Concert Hall, rests in the...