After a picture of a denim jacket she’d embellished with the words ‘Not Your Habibti’ went viral, 21-year-old Palestinian-American Yasmeen Mjalli moved to Ramallah to kick-start an all-Palestinian feminist movement. 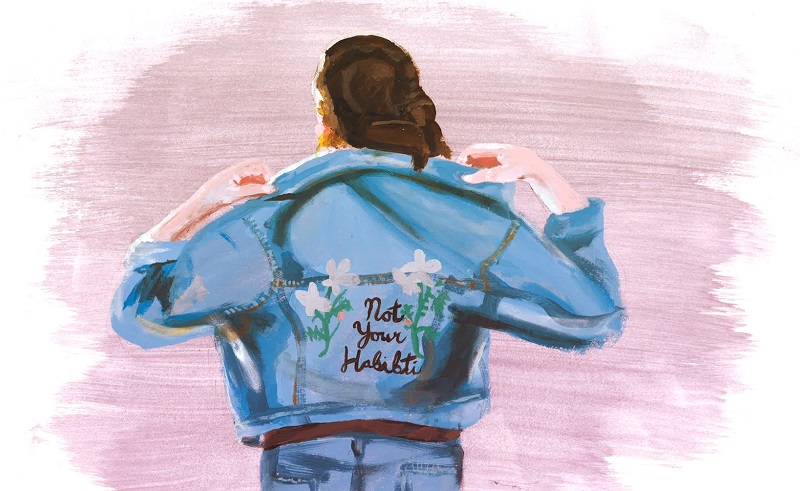 “Traveling from city to city, you’re led through mountains and hills painted in long green grasses and dotted with crimson poppies. Our traditional homes are decaying with majesty,” Yasmeen Mjalli says dreamily of the West Bank, her motherland, where she has been living for the past year. Yasmeen Mjalli (Photo: This Is Humanity)

After a picture of a denim jacket she’d adorned with the words ‘Not Your Habibti’ went viral, sparking debate about sexism in Arab societies, she packed her life, her feminism, and some statement t-shirts into a suitcase and left for Ramallah, where she launched BabyFist. Not Your Pseudo Celebrity Friend’s Sad Attempt at Clickbait Fashion, BabyFist is a social movement whose goal in creating apparel “is to nurture the young women who know the daily burden of unwanted sexual advances and look for a little of their own freedom in the clothes they wear,” Mjalli writes in the organisation’s blog. Photo: This Is Humanity

Being Arab, female, and feminist is a very lonely place, one reserved for insolent, nasty women who dare extrapolate the most basic values of equality and human rights to themselves. Such is Mjalli’s burden, who was in for quite the rude awakening – or a crash course in feminism, depending on your outlook. “I was perpetually angry as a teenager because of gender-based issues and discrimination. My brothers were allowed to do things I wasn’t, like play soccer or stay out late,” she recalls. “I wasn’t allowed to do the same things as the other girls in my school classes, like wear shorts or talk to boys. I always felt that these things were inherently violating what I felt in my heart and knew to be right.”

Her first gust of feminism came at the age of twenty, well past ‘teen angst’ and ‘raging hormones’, mid argument with her father one day. “He told me that he hadn’t brought me to Palestine to change tradition. I responded, ‘watch me,’” she recounts. And watch her he did. Riding on the back of the success of the #NotYourHabibti movement, BabyFist is leading social reform in Palestine by building a self-sustained sanctuary community, with 25 Palestinian women on the burgeoning organisation’s payroll and 10% of the proceeds going to the Palestinian Working Woman Society for Development (PWWSD). “With street harassment, sexual assault, and gender-based discrimination, I knew that I needed to deal with it properly so that I and every other Palestinian woman could go through life not having survived, but rather having thrived,” she says.

Apart from using women’s bodies as the conduit for gender-specific social messages, BabyFist seeks to create spaces for women to support each other, where they can verbalize their day to day struggles in society and express themselves through different art mediums. “I wanted to create a network of support, a family of women who would lift each other up in the midst of issues we were all terrified to speak up about,” she explains. Part of the organisation’s mandate is also to spark a public discourse led by female voices. “I’ve led two different typewriter projects, Not Your Habibti and Dear Mr. Prime Minister, in which women are given the opportunity to voice their opinions about normally taboo issues,” Mjalli says. “BabyFist also hosts support groups, using different mediums of art as the conduit for forging a support system between women who are struggling with or frustrated with the same things.  […] The goal is to continue these projects, increase them in terms of number and frequency, so that more and more women are engaged in this important conversation about our rights.”

Like many Arab feminists, Mjalli is caught in that tiny intersection of feminism and Islam, where semantics are everything – the presupposition being that both Muslims and feminists are two culturally unstratified communities. “I would never call anyone a ‘fake feminist’ for defending a feminism which is relevant to his or her culture, time, and place. This is where I like to use the phrase ‘shades of feminism,’ which speaks to the variety of feminisms that exist all over the world,” she explains. “There is no one-size-fits-all for feminism. What works for Palestinian women is different for Palestinian-American women. There is white feminism, Arab feminism, Islamic feminism, Christian Arab feminism, etc. Every culture has – or should have – its own feminism in which, within that particular socio-cultural context, women are inherently free and gender equality is practiced and celebrated.”

There is no one-size-fits-all for feminism. Every culture has – or should have – its own feminism in which, within that particular socio-cultural context, women are inherently free and gender equality is practiced and celebrated. The case for inherent polarity between what is feminist – and progressive – and what is Islamic is not without merit. Lately, however, rational, nuanced discussions about Islam, as a belief system, have taken a backseat to anti-Muslim and anti-Arab bigotry – following the rise of Islamic fundamentalism, the refugee crisis, the Cologne sex attacks, and other mass sexual assault incidents. “This is why I love the #MeToo movement so much. The fact that it was spawned in Hollywood finally paints sexual harassment and gender-based discrimination as an international issue, rather than something inherently Arab,” she says.

This is why I love the #MeToo movement so much. The fact that it was spawned in Hollywood finally paints sexual harassment and gender-based discrimination as an international issue, rather than something inherently Arab.

And with that intersectionality comes the need to address the gender issues relative to each community and each culture. “For the first time, women are rallying behind their respective movements (#MeToo, #NotYourHabibti, etc.) and uniting to illustrate that gender-based issues exist all over,” she enthuses. “For the first time, the fight for gender equality isn’t in the history books of white culture, but on the forefront of socio-cultural issues today.”

There’s another special place reserved for Palestinian feminists and progressives who hold Palestine to the same moral standards as its occupiers – they’re intellectual traitors. “How can we expect the world to recognize Palestine as a state and Palestinians as a people, when we ourselves don’t recognize women as equal to men?” she exclaims. “I’m not only battling men but also women. It’s a really scary thing to encounter women who are defending a patriarchal system which inherently suppresses them. And I honestly don’t think it’s a generational thing.” On the other ideological battlefront, Mjalli has to grapple with Israel’s gender washing and monopoly on feminism and gender equality in the Middle East, which continues to go unchallenged. In resuscitating Palestinian feminism, BabyFist attempts to dismantle the ‘island of civilization in a sea of barbarism’ narrative by claiming feminism back from far right Zionists who hold Israel’s gender equality track record over Palestinians’ heads, rather convincingly. “Israel is using this [gender washing] as a tool of leverage and it’s quite sad that the world buys it. Palestine still has a [long way] to go in the journey towards gender-equality and women’s rights, but that’s never an excuse to occupy and oppress,” she says. “If anything, it only hinders our progress on [that] journey. The occupier oppresses us to the degree that social, economic, and legal change is extremely slow, and then punishes us for it.”

Nothing exemplifies this dichotomous vision of feminism than the curious case of Ahed Tamimi. The 17-year-old Palestinian activist is currently serving a prison sentence in an Israeli correctional facility for slapping an IDF soldier who was trespassing into her home in the village of Nabi Saleh in occupied West Bank. A video of the incident soon made the rounds on Israeli social media, resulting in public uproar that culminated in prominent Israeli journalist Ben Caspit’s call to rape Tamimi - “in the case of the girls, we should exact a price at some other opportunity, in the dark, without witnesses and cameras,” he wrote in Maariv. Caspit’s statement prompted outrage by the Israeli left, but from the loudest voices of feminist activism and the #MeToo movement, not a peep. “Ahed Tamimi’s empowerment is unique from the empowerment of women and girls in any other part of the world who seek to empower themselves socio-culturally. In defending herself, she was empowering herself in the midst of an illegal occupation, something systemic,” Mjalli opines. “The radio silence on the part of the mainstream feminist groups across the globe is due to fear of controversy. [Was she] betrayed by today’s feminists? Unfortunately, yes.” Photo: This Is Humanity

Being a Palestinian feminist is its own juggling act, a two-front war of ideas. It means not checking your feminism at the door when discussing the Palestinian struggle, all while holding a mirror up to mainstream feminism’s Palestinian blind spot. For a Palestinian to wield any measurable power in the corridors of feminist theory, they have to underplay their Palestinian nationalism. That’s why Ahed Tamimi is a terrorist for channelling her self-empowerment to symbolize Palestinian resistance to the occupation, and Gal Gadot is a ‘woke’ feminist icon for being an on-screen vigilante. And until the world learns to see Gadot and Tamimi in the context of their common denominator as symbols of two different types of female self-empowerment, until feminism is decolonised and colour-blind, Palestinian feminism will continue to float in this limbo of moral relativism. 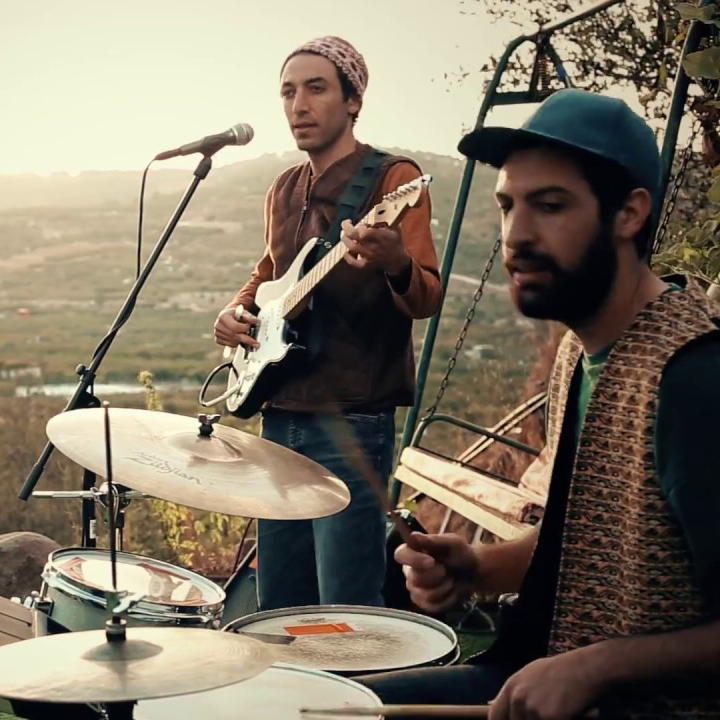 From the orchards and hills of the Occupied Golan Heights, TootArd forges a sound...