Located in the remote town of Habala in the foothills of the Asir Mountains, the flower men have lived for 2,000 years. 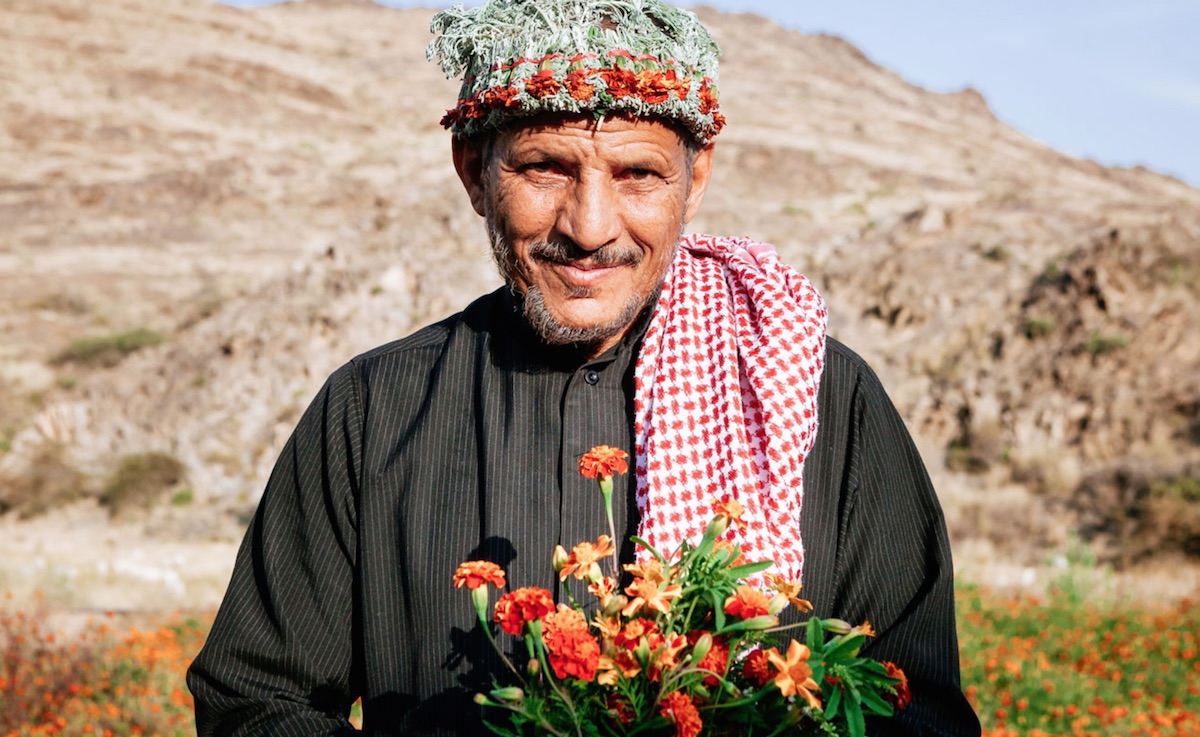 Continents over and millennia older than Coachella, pop princesses, and VSCO girls, flower crowns have been adorned by a tribe of Saudi mountain men, an unwavering tradition that has lasted 2,000 years.

The Qahtani tribe has lived on the foothills of the Asir Mountains in southwestern Saudi Arabia for millennia, and their defining flower crowns have had the same lifespan. Strung from some of the 2,000 varieties of flora available in the region, the garlands are often made of marigolds, basil, jasmine, and fenugreek. And while they're sometimes used for medicinal benefits, like fighting colds and headaches, they’re still largely worn for the aesthetic, with some men even dying their beards with henna to match the bright orange of the marigolds. Photo courtesy of the Saudi Ministry of Culture.

According to Undiscovered Asir, the problematically-named 1993 book by French ethnographer and photographer Thierry Mauger, who lived in Saudi Arabia for ten years,  these flower crowns function for the tribe’s younger men as a sort of friendly beauty competition, while middle-aged men and above take a more sophisticated approach to the garlands, wearing their wreaths with greenery like wild basil.

What was once a little-known tradition from a geographically isolated, mountainous area of the country has gathered momentum in recent years. So much so, that the Saudi Ministry of Culture even started holding an annual Flowerman Festival as of August last year.

Asir’s tribespeople have seen their traditions withstand the test of time, and it’s partly due to the relative lack of urbanisation of the region. Although this has recently starting changing as a result of increasing tourism to the area, the Qahtani tribe has resided in what is historically a remote area, free from the interference of outsiders.

The isolation is also partly geographic, with the jagged, mountainous terrain rendering the area virtually inaccessible up until the 1990s when the Saudi government constructed cable cars to the southern region. Before that, the villages were only reachable by a network of handrails and rope ladders. The Qahtani tribe largely live in mud-brick homes scattered at the green steps of the mountains, which closely resemble the architecture of Sanaa in neighbouring Yemen. Although the buildings are made of mud and stone, they house complex details like rain drainage systems, thermal retention, and boast bright blue windows that are said to keep both evil spirits and mosquitoes at bay.

The homes are expertly painted on the interior by the women of the families in an extremely popular style called Al Qatt Al Asiri and has even been recognised by UNESCO's Representative List of the Intangible Cultural Heritage of Humanity in 2017. Repainted every year during Hajj season, the murals are meant to tell visitors more about the people living in the home. As for the mens’ part, they grow coffee, flowers, herbs, wheat, fruit, and khatt—a stimulant drug illegal in Saudi Arabia. Most important of these are of course the garlands, which represent a large portion of their local economy, with entire souks dedicated to selling the flower crowns. Growers flock to the market each morning to sell each bag of flowers for around 25 Saudi riyals. Women are also involved in the garland business, as the primary craftspeople weaving together the flower crowns in the markets.

This whole ecosystem is possible because of Asir's climate, which receives far more rainfall than any other part of Saudi Arabia. While the temperature in Riyadh can reach up to 45 degrees Celsius on a regular day, Asir province, 900 kilometres to the south, would expect chilly winds and rainstorms. Photo courtesy of the Saudi Ministry of Culture.

Perhaps most striking about the Qahtani tribe, the flower crowns aren’t just captivating for their beauty. There's a poetic contrast they poke fun at. Worn by rugged mountain men who live in an area whose name literally translates to “difficult,” one can’t help but marvel at the delicate and artful tradition. 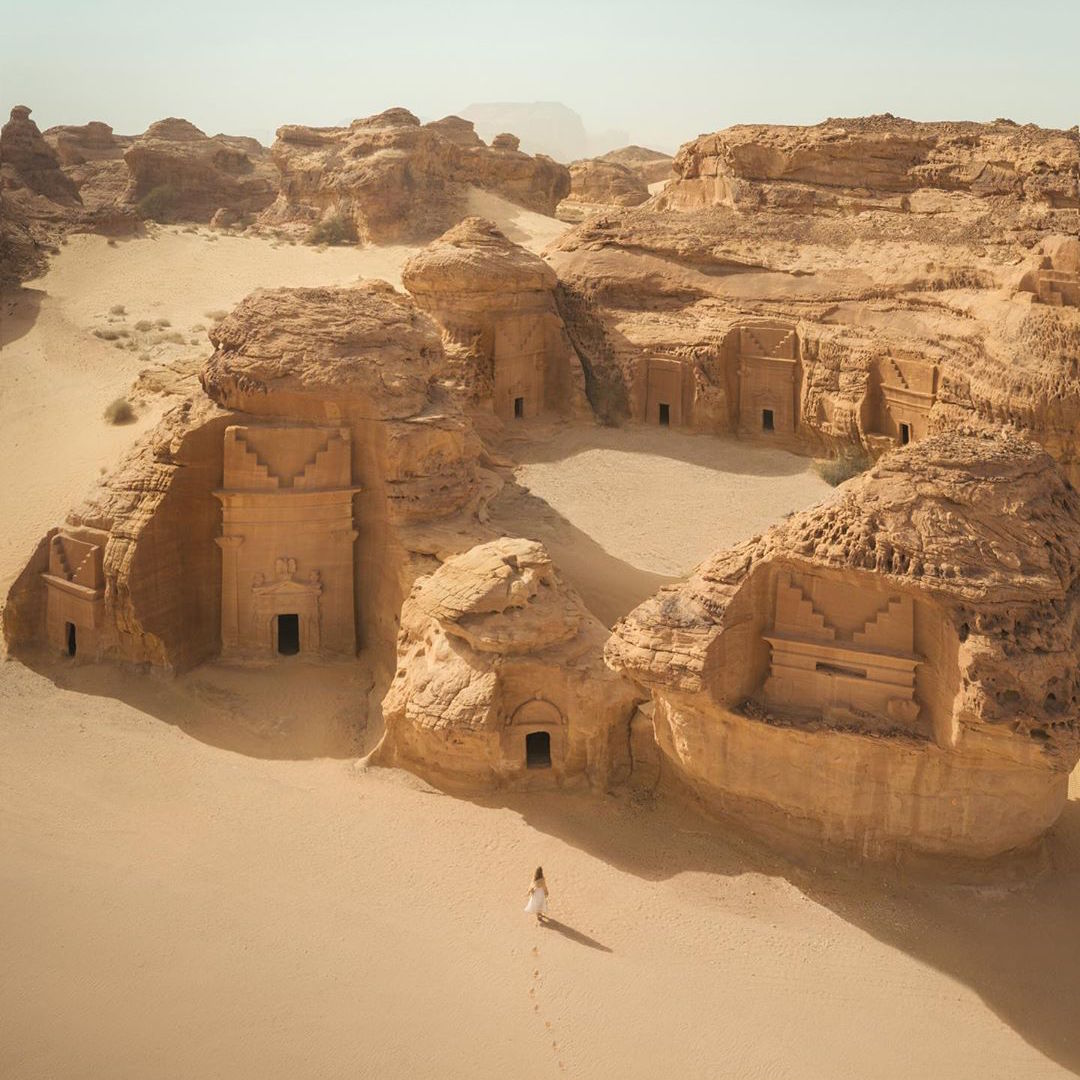 The spectacular monuments in the ancient Nabatean site are on display in these new...