Living and Dyeing: Behind the Basins at Cairo's Oldest Dyehouse

[EXCLUSIVE] Life inside a dyehouse is as storied as it is colourful... 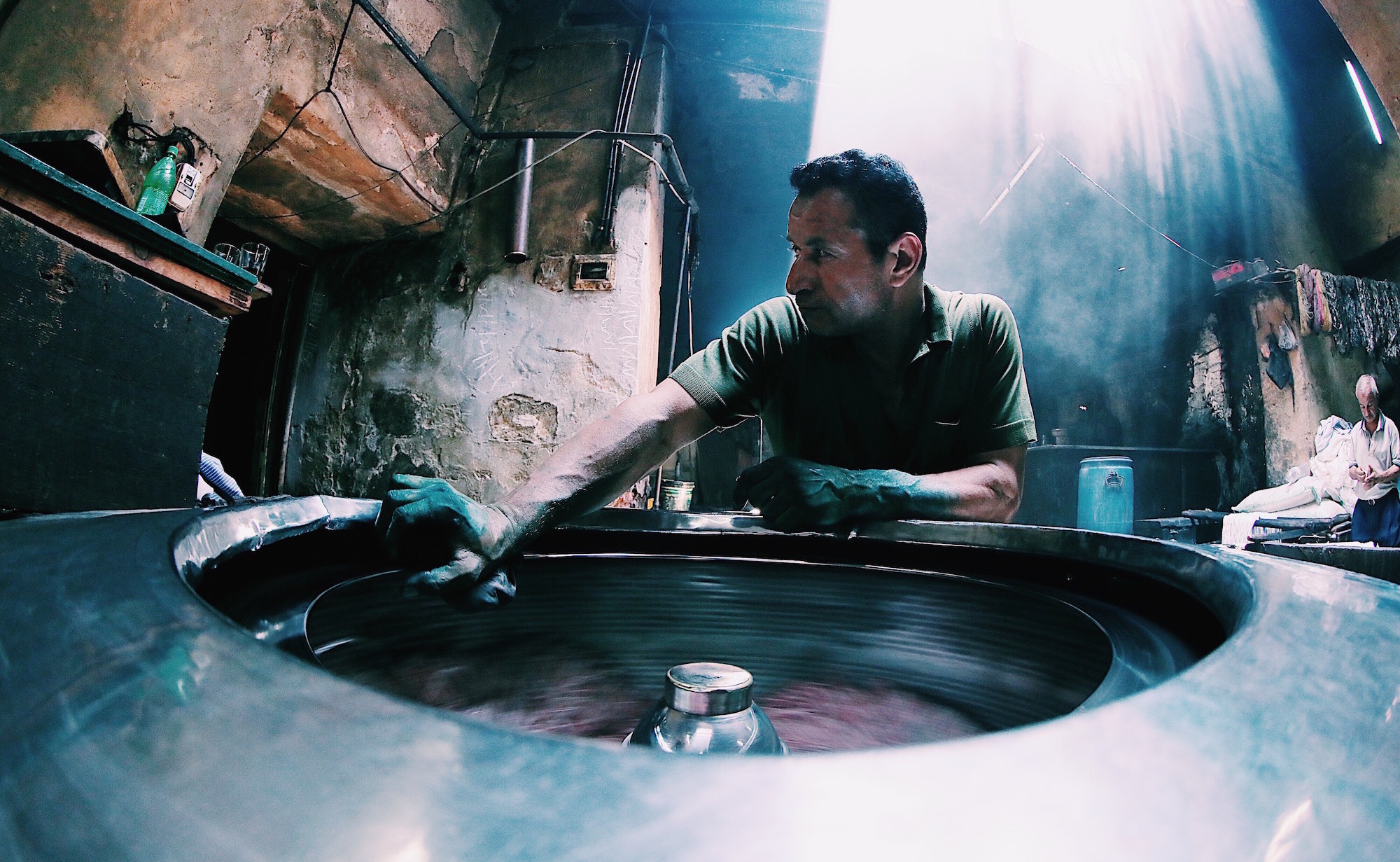 It’s a well-known fact in this day and age that every colour out there has a profound effect on your average human being, both mentally and physically. Gazing at a white surface can impart a sense of serenity and peace, whereas for most, the colour black evokes feelings of seclusion and dread. Blue is a warm, psychologically stable colour, whereas red can impart a sense of anger or heat.

To a psychologist, this can aid in their therapeutic process. To a clothier, it matters more for purely aesthetic purposes. To the owner of Cairo’s oldest dyehouse (or grille), it’s a bit of both, albeit primarily for profit and profession’s shared sake.

Established in 1901 in Khedivial times, and situated in Cairo’s El-Darb El-Ahmar territory, the dyehouse has been churning out a world of raw colour for Egypt’s many tailors, clothiers, and weavers for over a century. It has been owned by one Salama Mahmoud since around 1975, after his stint in the 1973 War. “I was born in 1937, in Shebin El-Qanater. I came to Cairo when I was around 8 years old, and I’ve worked pretty much every job I could out there. A blacksmith’s assistant, then a blacksmith, then serving tea at an Ahwa, then this, then that." Salama has dabbled in different professions to say the least, but it was the dye business that managed to catch his heart and soul in the end. “Eventually, I wound up working with dyes, and my mentor at the time helped me appreciate what I did, come to love it even. Working with, and being surrounded by colours made me love the job more than anything - so much so that my ID has Technical Dyer written under profession.” Salama served in the military for nine years - and he’s seen two wars during his active service. After 73’, he decided to rent the dyehouse from the Ministry of Endowments, and it's become an establishment which he treats as more of a bastion for the soul than a workplace. “I’ve been in this business for 73 years, and each passing day has been just as fresh and rewarding as the first. I wash my sorrows and aches away in these dye basins, it’s a therapeutic process to do what I do. I’m at my happiest when I work, and my mentality towards it hasn’t inched in any other direction since I started.”

I wash my sorrows and aches away in these dye basins, it’s a therapeutic process do what I do. I’m at my happiest when I work, and my mentality towards it hasn’t inched in any other direction since I started.

Salama’s dyehouse mainly works with three materials: silk, cotton, and wool. The actual dying process goes through many stages before delivering a finished, vibrant product, depending on the material of course.

I’ve been in this business for 73 years

“Cotton, which is used in making shoelaces for example, is shipped to us as dry as it comes. It’s then macerated in a basin with liquid soap oil to brighten it up a bit, and then we splay it out over a grid of wooden sticks to drain the oil. After it’s drained, we introduce it to a boiler with the required dye, and after enough time, we put it through a wringer to dry it off as much as possible, then it’s splayed out on the roof under the sun to dry. When all is said and done, we bag it and tag it.” The dying process for cotton isn’t the same for other materials. Nylon, for example, doesn’t need to go through the maceration and brightening phases; it’s introduced directly to the dyes with 50 litres of either hot or cold water, then it’s wrung out, bagged, and ready to go. Silk, on the other hand, has to be dyed twice, and then washed appropriately to seal the colour in the fibres.

More often than not, Salama’s clientele have heavy need for black fibres. In spite of this, it is not his most preferred spectrum of light. “I adore the colour white, so much so that I have 150 white Jellabiyas, and even a tailor I specifically employ for producing and maintaining them for me. Of course, I love all of the world’s colours, but white has an immovable place in my heart.”

Dyeing is as much a matter of science and technique as, say, metallurgy or glass blowing. Each type of fibre, each grade of fabric out there has its own process with regards to the shade of colour desired. As for the dyes themselves, they’re mostly shipped in from France, China, Holland, and Italy. “China, being who they are, has a majority share when it comes to dye production; they make everything. But when it comes to, say, turquoise, absolutely nobody can come close to France.” Salama exclusively purchases organic colour powders, avoiding synthetics entirely. He mixes them with the appropriate amount of water relevant to the amount of fibre he’s asked to dye, so as to get the best bang for buck, before the dying process gets started. Speaking of water, it is by no means a negligible aspect of the dyeing process. “After we mix the powder with the water, the exact temperature of the water is the deciding factor when it comes to the end product. For example; if you were to introduce black dye powder to cold water, it’ll come out grey. Whereas adding it to hot water will produce pure black, and the same concept applies with most dark, neutral colours such as blue or brown. Brighter colours, such as the different shades of pink, need cold water.”

After we mix the powder with the water, the exact temperature of the water is the deciding factor when it comes to the end product. For example; if you were to introduce black dye powder to cold water, it’ll come out grey.

For the majority of the dyehouse’s lifespan, heat had always been supplied by burning lumber as fuel, seeing as natural gas has long been a thorn in Salama’s side. “We’re connected to the gas grid and everything, but we’ve shut it off on our end. Gas is expensive, so is petrol and solar, so I just stick to old-fashioned timber to get by.” Alarmingly high temperatures, fumes from burning lumber and various chemicals, and the lack of any proper personal safety measures or health insurance has not dissuaded Salama or any of his workers from their line of work. “Colours never hurt anybody, and if there’s one thing I’ve learned throughout my life, it’s that work can make you forget whatever’s bringing you down, be it physical or mental. The only real hazard out there is if you were to stop working altogether.”

The only real hazard out there is if you were to stop working altogether.

Visit the dyehouse any day of the week, and you’ll find all sorts of workers and craftspeople running around the place, with a different cast of characters every day. “All 12 of my children work here, as well as the 40-something grandchildren I have. I’m certain there are more than 40 of them. I don’t force any of them to work with me; I can handle things pretty well on my own lonesome, thank god. I don’t have favourites when it comes to those of my family who work with me; those of them who love what they do, in my eyes, are wonderful.” Though technically, the children's work in the dyehouse constitutes child labour, the sad reality in Egypt is that not only is it rife, but many kids actively opt for it, choosing to drop out of school and start working at a young age, believing that this is a manner in which to earn money faster. One of Salama’s grandchildren, 15-year-old Mustafa, spoke highly of the experience overall. “I left school to come work with my granddad about three years ago, and with the money I’m making and saving, I’m slowly building a future I want for myself.”

All 12 of my children work here, as well as the 40-something grandchildren I have.

“I’ve been working with him for 60 years," said an employee and close friend of Salama, “I asked him if he had any work way back when I was 10. I didn’t ask about the wage, that wasn’t something we worried about back in the day, we only cared about the work. He hired me, and here I am, 60 years deep into the dye business, shoulder to shoulder with him.” If you’ve lived as long and as storied a life as Salama continues to live, you’ll have a few tales to tell. Out of all the daily occurrences and lifelong events that Salama has endured, one stood out among the rest. “Back when I used to work with the Prison Sector, we used to make blue dyes for them (Egyptian prison inmates wear blue jumpsuits) for incredibly low pay, something that didn’t sit well with my kids. They told me to just leave it because we were not only not making a profit, we literally working at a loss, but I wouldn’t, because once I’d made an agreement, there was absolutely no going back. To my surprise, however, they liked the work so much that they started asking me for more dyes, and in much greater quantities, for officer uniforms, which ultimately covered my losses and then some.”

Modernity and technological advancement, for better or worse, are inevitable. But even with the spread of high-tech facilities and techniques when it comes to the dying business, a lot of people still prefer the old-fashioned way, something that Salama’s oldest son, Moustafa, was glad to elaborate on.

“I’m 55-years-old, and I’ve been working with my father ever since I was a kid. Where I stand right now, and after all these years, I can wholeheartedly tell you that no matter how advanced the facilities, techniques or machines may be, none of it can compare to what we do here, by hand. We even have special colour mixtures that machines just cannot replicate with the same precision. Handmade always wins out.”

Whether they’re family businesses, massive enterprises, wholesalers, retailers, or even whole industrial complexes, they’ve all dealt with the dyehouse, in one way or another. “Our customers come from all over Egypt; whether it’s Cairo, Qalyubia, Aswan, or even Alexandria, I’ve been dealing with all of them since the 70’s to this day.”

Every day in Salama’s life at the dyehouse is as if it’s his first, with the same intensity and passion, he churns out Egypt’s most vibrant colours as only he and his kin can imagine. I pray to god that I’m healthy and able enough to keep this dyehouse running for ages to come, for those after me, and those after them as well.