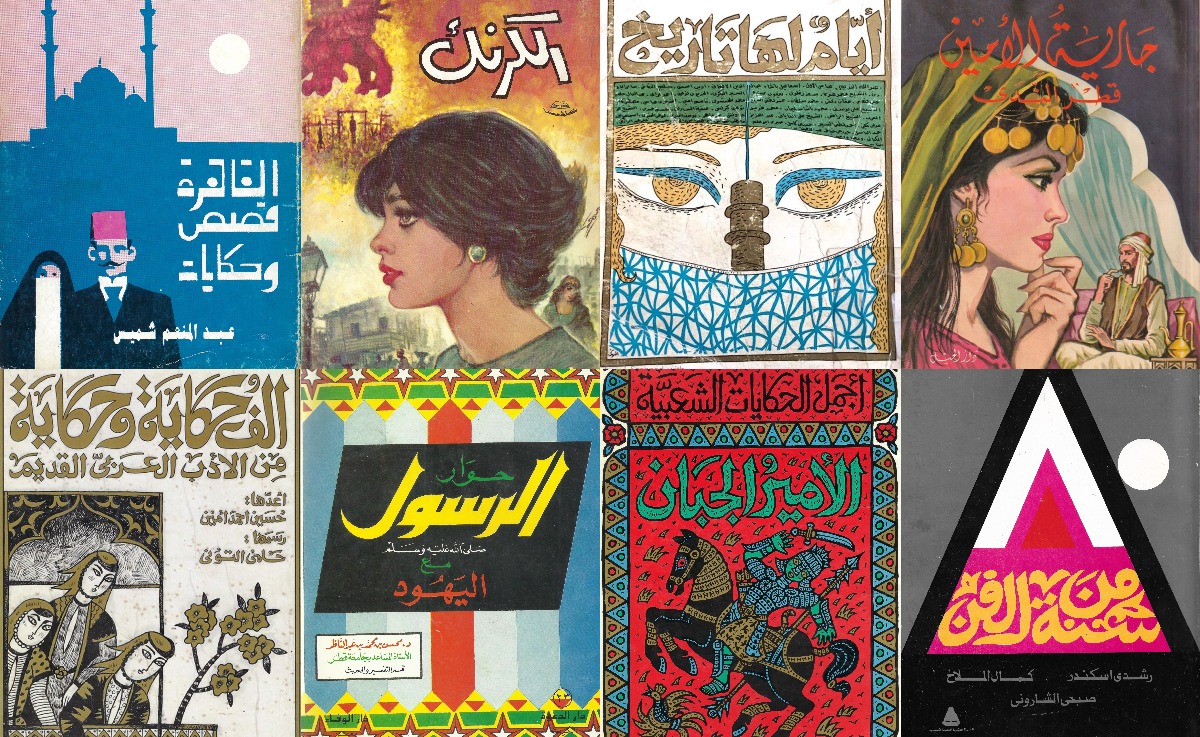 Throughout the Arab world, there is one artist whose work can be found in every home, whether or not we know it. “There is not one household that doesn’t have my paintings,” the late Egyptian painter Gamal Kotb once said of his ubiquitous work that needed no canvas, no heavy frames, and no galleries to exhibit.

Throughout much of the 20th century, Kotb made a name for himself creating the covers for bestselling novels by the biggest names in publishing, including Naguib Mahfouz, Ihsan Abdel Quddous, and Yusuf Idris. The artist became one of Egypt and the Arab world’s most celebrated artists, albeit in a medium that remains wildly underrated today.

Books aren’t just books; they’re reflections of what society was talking about, what freedoms it had. They’re not just visual objects.

“These weren’t illustrations; they were oil paintings. You can imagine the effort, how they approached it as a painting: every copy of every book was an exhibition,” says Egyptian designer and researcher Mahmoud El Hosseiny, whose initiative, the Arabic Book Cover Archive is dedicated to preserving and collecting this very history.

“Very rarely do book cover designs today really make you stop and say ‘wow’,” El Hosseiny tells me. “So our goal is to really enrich this genre of design that’s dying, or has actually died already.”

Left to right: covers to Naguib Mahfouz's Midaq Alley, The Harafish, and the Thief and the Dogs by Gamal Kotb.

By sheer coincidence (or pre-destined symmetrical composition if that floats your boat), my conversation with El Hosseiny took place over the phone while I sat under lockdown in my childhood bedroom, surrounded by my late grandfather’s library that I was procrastinating organising.

My grandfather was a reader throughout his entire life, so around me lay hundreds and hundreds of books. The great works of Arabic literature, history books, studies on religion and society and philosophy from a million different institutions across the Middle East—the books I had grown up around, but never seen the covers for what they were: art in their own right.

These weren’t illustrations; they were oil paintings. You can imagine the effort, how they approached it as a painting: every copy of every book was an exhibition.

It’s like they’ve blended into the background of our visual culture: I know there’s something nostalgic and beautiful about the scenes on old copies of Naguib Mahfouz’s Miramar or The Thief and the Dogs as compared to the later editions on my bookshelf, but I’ve never really stopped long enough to look at them, saturated as I am with covers upon covers of modern books that seem to have eclipsed their predecessors.

“Exactly. The fact that you’ve personally stopped noticing it is because your mind is so used to the blandness of book covers now. You’ve stopped noticing that it’s there, because we’re used to nothing striking us from a distance,” says El Hosseiny, indulging but correcting my little epiphany. Artistic and impressive though they are, these creations are the realm of design, not art, with explicitly pragmatic ends. “That’s the whole point of book covers. Bookstores, even small ones, are a fierce competition from the shelves. You need to reflect what’s on the inside, and set your book apart.” With a small team of volunteers from around the region—including Palestine, Lebanon, Saudi Arabia, and the UAE—the Cairo-based El Hosseiny is creating an archive to trace the lineage of this genre of design. The archive is on Instagram for now, but is hoping to launch a full database into the future, with the goal of better understanding how it got to where it is.

“The landscape of book cover design today is cluttered—they’re mostly abstract, and as a lineage it seems somewhat deformed. There’s no continuity, and we don’t know where the disconnect is. That’s why I’m trying to go back in time and draw that line. And then hopefully other researchers can pick it up in other fields.”

The purpose of this research isn’t to say that what we had is better than what’s being made now. All I’m saying is that we don’t know how we got here.

“I’m sure that linguistics and sociology, for example, have so much to say about this,” he continues. “Books aren’t just books; they’re reflections of what society was talking about, what freedoms it had. They’re not just visual objects. We can speculate about what could have happened, but these things don’t exist in a vacuum. They’re very much affected by politics, religious approaches, society’s appreciation of and excitement for reading.”

And the culprit of this perceived decline seems to also be the most expected one: technology. Once upon a time in the dark ages a few decades ago, the process was manual, which meant every piece of the puzzle was drawn. But El Hosseiny zeroes in on a hyper-specific technological factor: Photoshop’s layering tool. (For all of us non-designers, layers are essentially images stacked upon one another, making up all the different elements in a design. In 1994, when Photoshop's third edition introduced layers, enabling designers to adapt and change however many elements they wanted, complex compositions became incredibly easy, revolutionising the design process.)

“Before, every layer had to be a very calculated decision. So book covers could have a maximum of four layers, including the text and the title. But now, designers don’t even think in terms of layers, it’s taken for granted that you can play around with however many you want. Back then, before clients and third-party goals, it wasn’t designers; it was artists creating book covers.”

These things don’t exist in a vacuum. They’re very much affected by politics, religious approaches, society’s appreciation of and excitement for reading.

“And so there’s a disconnect between the designers making book covers today, and the artists who used to paint them. They didn’t fully lead into one another, and something seems to have been lost in the middle.”

For now, the Archive is in the first stage of its work, collecting material from across countries and publishing eras, with contributors sending in collections that volunteers filter through. So far, they’ve catalogued over 500 books, which they’re rolling out on their Instagram page. Down the line, the independent initiative hopes to find an institution to help fund a full-fledged digital database. For now, El Hosseiny and his team are reaching out to publishing houses and old bookshops, asking for help.

“There’s always the sense that we’re on the edge of disaster when it comes to this kind of knowledge,” he reflects. “I’m scared of how easily these things are forgotten and destroyed, with no one the wiser. So I feel like I have to rush to collect as much as I can, before these books are ruined or burned or destroyed somehow.”

I’m scared of how easily these things are forgotten and destroyed, with no one the wiser. So I feel like I have to rush to collect as much as I can, before these books are ruined or burned or destroyed somehow.

I ask El Hosseiny which is his favourite cover, expecting him (in my non-designer naivety) to point me towards the most visually complex, one of the oil paintings or a cover that packs a full narrative or political moment into a scene. But he points to one I hadn’t even noticed at first glance: Hewar El Rasool Ma’ El Yahood (The Prophet’s Dialogue with the Jews, pictured above). And his reasoning is simple. This is a religious book, by a religious publishing house that, more than anything, is striking: a quality he says has completely disappeared from the similar books of today, austere as can be instead.

But the ethos of El Hosseiny’s project isn’t actually that of pure nostalgia bemoaning the irrevocable loss of a bygone era. “Me saying that today’s work isn’t as nice or striking or whatever, that’s nothing more than my personal take. The purpose of this research isn’t to say that what we had is better than what’s being made now. All I’m saying is that we don’t know how we got here. After our collection stage is done, and we have a coherent picture of the past, then we can start to evaluate.”

*A note from the Arabic Book Cover Archive: we are conducting this research to serve as educational material for others and are by no means claiming copyrights over any of the designs. This right is reserved for each publishing house and the designer of the work. We will not support the reproduction of this material for any commercial use without legally obtaining copyrights. 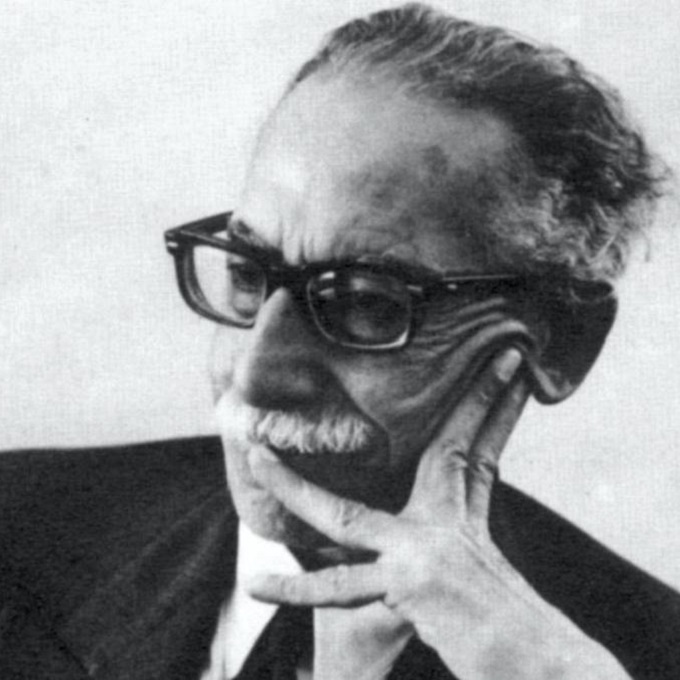 The Egyptian playwright is only the second Arabic-language author to be nominated...