Female artists are not only leaving a mark on the historically male-dominated graffiti scene in the region, but are pioneering their own digital form of revolutionary art. 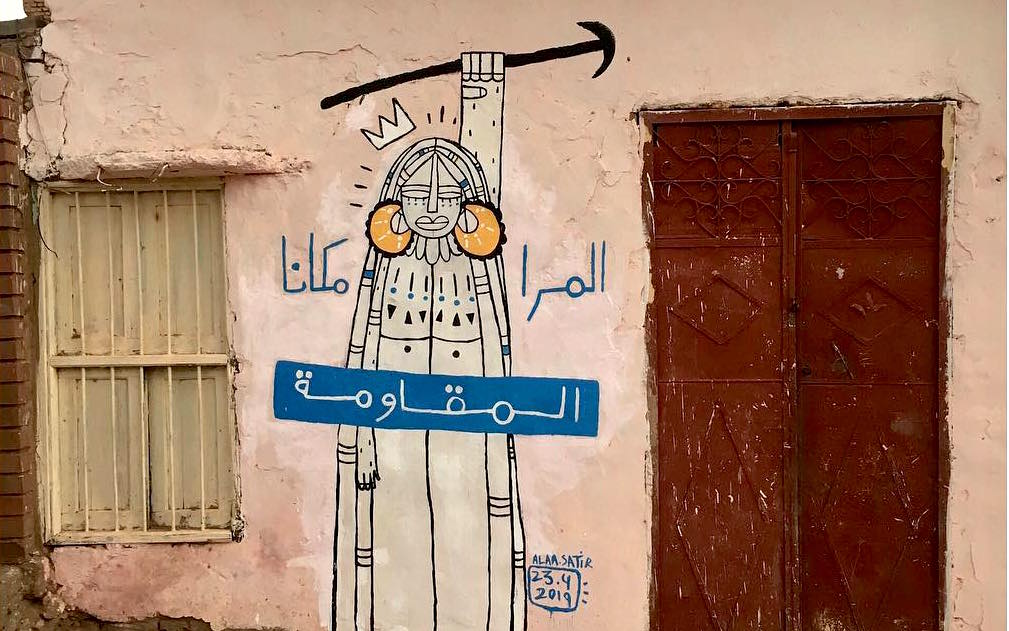 That women have been at the forefront of almost every revolution in the Arab world since the Arab Spring – and perhaps even well before that – is not news. Neither is the fact that they have long been immersed in the artistic movements of their respective countries, forcing their often neglected and unheard voices out into the world through art.

Street art – especially in the region – is most often associated with men. Recent revolutions, however, from the Sudanese in late 2018, to Lebanon and Iraq’s at the end of 2019, have proven beyond a doubt that women’s revolutionary art has become ubiquitous. Almost every wall in each of those countries boasts women’s faces, women’s chants, women’s art. And, of course, that can all be credited to women.

Women have also taken their art beyond the streets, into a larger, perhaps freer realm: the digital sphere. Most notably during the Sudanese uprising, digital art began literally taking over social media platforms, documenting everyday scenes from the protests, from Alaa Salih’s iconic moment chanting on top of a car, to the protesters’ tragic deaths at the hands of police. After that came protests in Lebanon and Iraq, bringing in a whole new surge of digital, documentative art, with women at the forefront, who took it upon themselves to keep the entire world in the loop with every new moment in the revolution, with works that gave justice to the simultaneously poetic and tragic reality of these life-changing social and political movements.

So from illustrators to women who make photomontages and collages; from sculptors to the classic graffiti artists; these 9 women have been re-shaping what both art and revolution mean in the contemporary age. One can confidently say that Lebanese illustrator Nour Flayhan was one of Instagram’s most powerful voices during the Lebanese revolution. From the first week of protests, her symbolic – and perhaps more importantly, noticeably inclusive – illustrations went viral across social media platforms, to the point that they are now still being printed on notebooks and merchandise.

Although originally from the Levantine mountains, she was raised in Kuwait and she is largely based there. Her consistent artistic production, then, throughout the Lebanese revolution, was her own form of protest and of spreading the messages that are chanted on Lebanese streets through other channels, and to those who might otherwise have never known them. Her drawings are vibrant and detailed, and most of them feature shows of unity, joy and celebration – all of which were characteristic of the revolution.

She credits her success to her ability to both embrace her heritage – which, as an Arab living in London for many years, was particularly difficult – and to quash her fears of “talking about topics that I wasn’t necessarily allowed to talk about growing up, [and] breaking out of the 3eib, haram kind of thing, or, people telling me, ‘don’t talk about rape; don’t talk about things that make people uncomfortable,” as Flayhan tells us. Check out more of her art here. The woman’s role in the Sudanese revolution had, from the very beginning, an undeniably powerful presence. So much so that a year later, and probably for many more to come, the iconic image of Alaa Salih on top of a car, her finger raised to the sky, remains an unofficial symbol for the revolution. Satir’s graffiti across the walls of Sudan – coupled with her digital renditions – provided daily, empowering slogans for women in the revolution. A mural painted in blue and yellow, with the words, “Women, stand your ground; this is a women’s revolution,” was one of her most famous, and not only has it gone viral, but it was the first of many murals targeting women in Sudan (both by her and by others who followed suit), and destroying the patriarchal belief that women’s place is not in the streets. Check out more of her art here. The Lebanese revolution saw tens of sculptures pop up around the country, many of which were women-led creations. One of the most iconic of those sculptures was the Martyrs Square’s phoenix, the idea of Lebanese artist Hayat Nazer. Sparking a collaboration between hundreds of protesters, Nazer executed her plan to create a phoenix-shaped sculpture made out of the remains of protesters’ tents, destroyed by government supporters. The tent frames' bronze, sharp edges meant to symbolise, to Nazer and those who built it with her, “that we [the Lebanese people] will not burn, we will not break, we will be victorious,” as she explained to The National. Check out more of her work here. Qatari and Mauritanian, this digital artist, known simply by her moniker Vatyma, has been making powerfully symbolic photomontages throughout the Sudanese, Lebanese and Iraqi revolutions. One particularly striking work is of a Sudanese boy against a blue backdrop, crying rivers of tears – a reference to the viral hashtag #BlueforSudan, which was a transcendent, powerful movement circulating in solidarity with Sudanese martyrs, sparked initially by the family of one of the first martyrs, Mohamed Mattar, whose favourite colour is blue. Check out more of her art here. Known by her moniker, sudalove, Sudanese graffiti artist Assil Diab was one of the many female Sudanese artists leaving their mark on the streets during the protests. Diab painted murals of martyrs from the revolution – which was notoriously bloody, leading to hundreds of deaths, many of which went undiscovered and neglected – on walls, immortalising their memory. Until now, she continues to paint, in blue, the hashtag #blueforsudan and other references to the revolution – a way of reminding people of its memory, and its longevity, long after it’s disappeared from news headlines. Check out more of her art here. Taking a break from her usual delicately painted still life, Soukayna began to use her watercolour to paint scenes from the Lebanese revolution as it fired on; from images of literal fire as it raged in the country at the height of the protests, to the occupation of the infamous Egg Theatre, which had previously been closed off for decades. Using the conventional, traditional canvas yet subverting its normalised functions completely, her paintings became powerful in more ways than one. Check out more of her art here. Creating simple yet instantly viral digital illustrations, perhaps because of that directness, Sudanese artist Rufaida Khalid - all the way from Saudi Arabia – made sure to play an active role in the movement in spite of her absence. Making designs – that are at times flyer-like, reminiscent of propaganda of of older times – spreading awareness about the marches during the uprising, and even giving voice to those joining the Sudanese revolution from afar, her art is inclusive, empowering, and made a unique stamp on the artistic revolution that emerged from the revolution on the streets. Check out more of her art here. Sudanese artist Yasmin El Nour’s (known on Instagram as Kandaka Khronikles, a reference to the name given to Nubian queens of ancient Sudan, which was reclaimed in reference to the female protesters during the revolution) work is beautifully poetic. By now instantly recongisable because of their mind-bending detail and etherealness, her works draw very much from Sudanese aesthetics. During the revolution, she blended that aesthetic with the scenes happening then, on the streets of Sudan and in its river, where bodies of protesters were thrown by government forces. Check out more of her art here. Lubna Safaa is an Iraqi graphic designer and digital artist whose art is as simple as it is striking, combining vibrant, contrasting colours and using catchy, powerful phrases to both spread the messages of the Iraqi revolution and empower people to join. Some of her art also holds powerful political commentary, like the one pictured above of Iranian general Qassem Soleimani, who was infamously killed by the orders of President Trump earlier this month. The general was hated by many Iraqis, who sought in this very revolution to put an end to Iranian interference in their country’s politics, and who was notoriously responsible for violent crackdowns during the peaceful protests – referenced here through his blood-covered hands. Check out more of her art here. 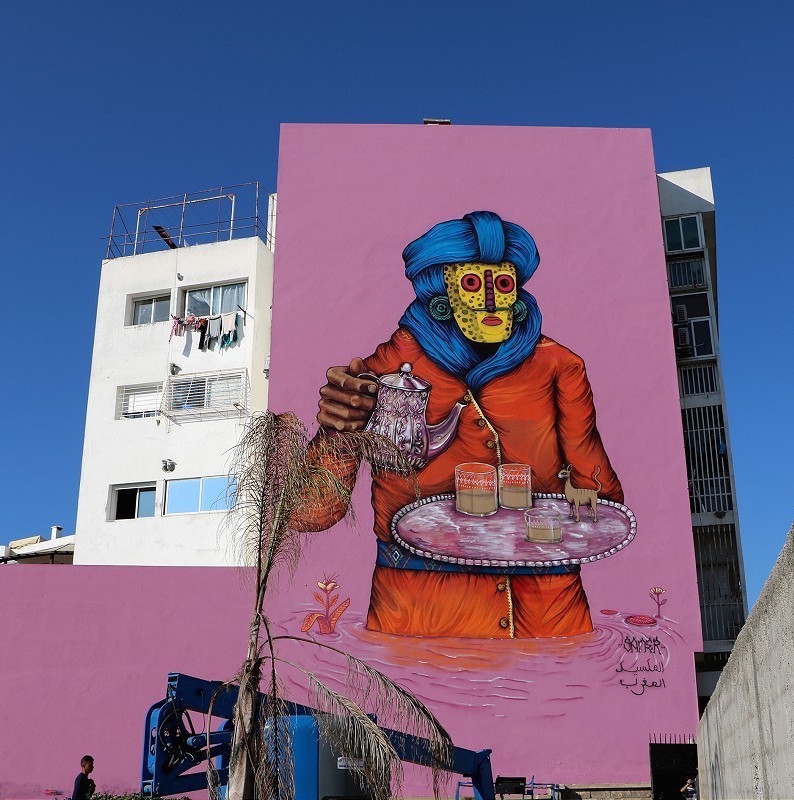 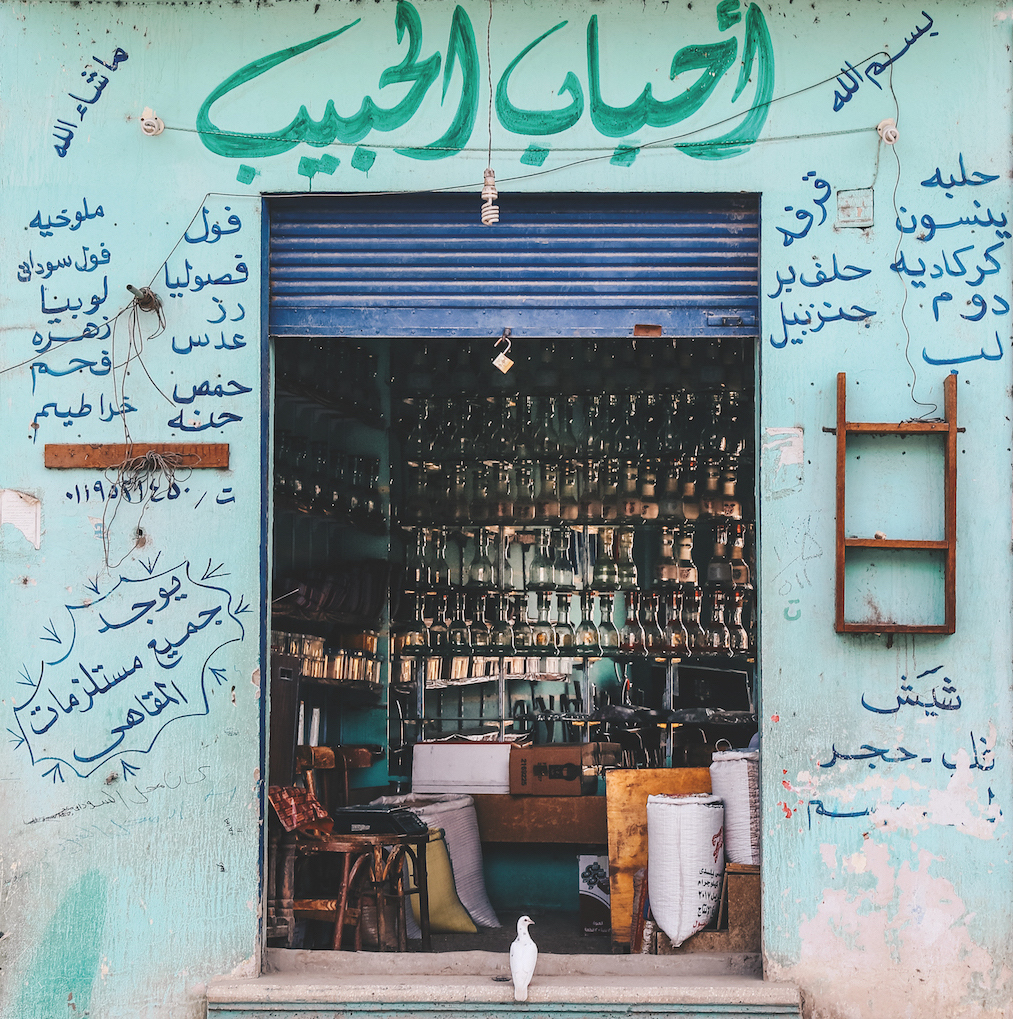