We sit down with Saudi Arabian artist Khalid Zahid who creates work that often tackles contentious issues in his home country – from women driving, to strict religious rules, to the oil situation – in easily digestible art pieces. 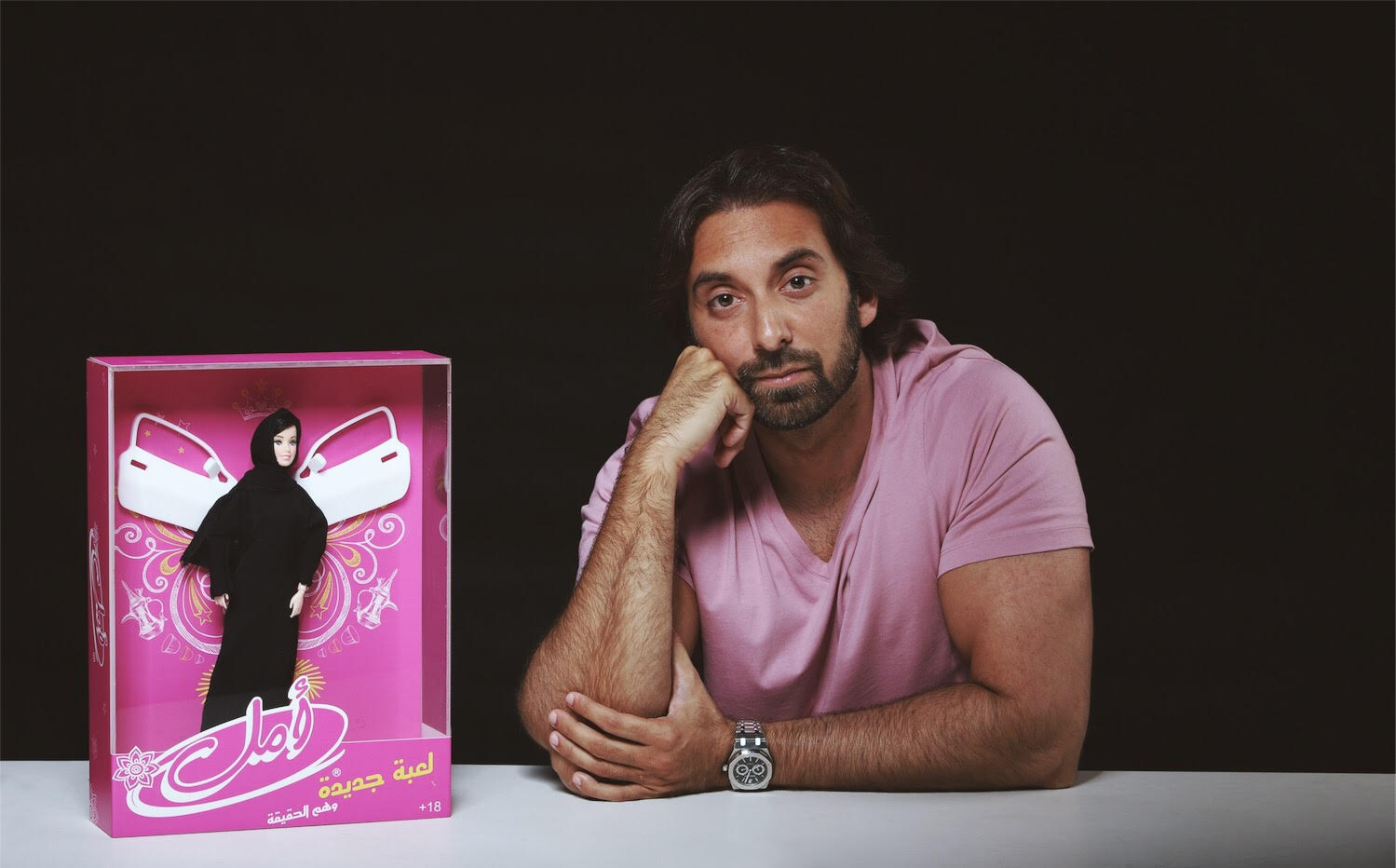 This simple sentence perhaps encapsulates the much of Saudi Arabian artist’s entire ethos, using an innocent, innocuous-seeming exterior to deliver a message. The toy he is referring to is his 2017 art piece titled Amal, a doll, in Barbie-like packaging donning a abaya, with wings sprouting behind her – wings made of car doors. On June 24th 2018, women in Saudi Arabia were officially able to physically get behind the wheel in the conservative country, a right that had long been denied to them. And way before the decree was ever issued to permit them driving in September 2017, Zahid created his piece in the hope that this would one day be a reality in the kingdom.

My country triggers me

Born in the UK, and raised in Jeddah, Zahid studied in the US before moving back to his native country to pursue a full time corporate career, and in parallel, pursue his passion: art. His work began with pop art but rapidly evolved; he now utilizes different media to create pieces which often revolve around tackling contentious issues in his home country – from women driving, to strict religious rules, to the oil situation – in easily digestible art pieces. “My country triggers me,” he says. But though that word often carries a negative connotation, he doesn’t see it that way. “It’s a good thing. My country’s rich with a lot of subjects and it’s very important for me as an artist to shed light on subjects that matter – and to also try to appeal to and bring in the community that don’t usually go to art exhibitions. So whatever triggers me and I feel like I can interpret in a way that might have a positive impact on the community, I do.” The Amal doll is actually the final manifestation of a series. Over four years ago, he created a stencil on a car door of a hijabi woman wearing a bowtie that read ‘freedom’. This later developed into another piece; a two meter mannequin of a woman with real car doors as wings. Eventually this developed into the doll. “All of these pieces were about women driving – everybody knows we don’t have that in Saudi. These pieces were created in the hopes that one day, Saudi women will be able to drive,” says the artist, “I think the Amal doll was the strongest piece of the series because I put it in the form of a toy store, which kind of threw people off. It’s a toy after all; you’re young, you’re old; everybody loves toys.” For him, the phrase you catch more flies with honey is incredibly applicable. “I’ll play on thin red lines but I won’t cross them. I try to educate people about stuff, in a cheerful, positive way,” he explains.

These pieces were created in the hopes that one day, Saudi women will be able to drive.

This notion permeates a lot of his work; if the packaging is unthreatening, it’s not that people more are likely to pay attention, because an antagonistic piece will certainly do that, but they’re probably more likely to listen with an open mind. Another one of his of his pieces, photo series The Simplicity of Islam, directly tackles religion, an issue from which most Arab artists steer clear – it is, after all, a sensitive subject to say the least. And in the Middle East, the line between art and blasphemy is a fine one. But Zahid tackles religion with the same almost childlike sincerity and appeal as Amal. Simplicity of Islam depicts sheikhs on carousels, their white thobes hitched up to their knees; sitting cross legged on the floor making balloon animals; bouncing on trampolines. “The whole idea behind it - if I can quote the prophet – is that religion is simplicity, and not difficulty,” says Zahid.

In a country where religion dominates – and is often associated with being stifling, asphyxiating the rights and joys of its believers and citizens alike, Zahid wanted to dispel this notion, and bring people on either side – the highly religious and the highly critical of the religious – to a middle ground. We are more similar than we are different, after all? The Simplicity of Islam

“In Saudi, religion plays a huge role obviously. So you see a lot of people who are skipping the core of religion – which are the five pillars of Islam [prayer, faith, fasting, charity, and Hajj] – and focusing instead on things that are very traditional and aren’t really applicable. But this way, you’re driving people away from their core and from their religion,” he explains. “On the other hand I’m also trying to shed some positive light on religious people like sheikhs because a lot of people are of the mindset of ‘we don’t want to be aligned with them, they’re too religious.’ They’re scared of them. But I know plenty of them and they’re pretty cheerful people doing normal things.”

If you’re a religious person, that doesn’t mean you don’t live your life to the fullest. There is nothing in either the Quran or hadeeth saying anything about whether or not ice cream, sports, or motorcycles are haram.

He’s a peacemaker of sorts. His art series blends the rigidity often associated with Islam with whimsy, and straight up silliness. And he does not believe the two need to be mutually exclusive. “If you’re a religious person, that doesn’t mean you don’t live your life to the fullest. There is nothing in either the Quran or hadeeth saying anything about whether or not ice cream, sports, or motorcycles are haram.” The Simplicity of Islam

Zahid’s approach may seem frivolous, but there is more to it than that; it is calculated, and any intelligent diplomat knows you don’t get what you want by alienating the other side. Khalid Zahid does not claim to be some subversive, irreverent artist, out to topple institutions with his insurrectionist ways. He’s not shoveling his ideas down your throat; he’s putting them in the body of a harmless Barbie doll; in the shape of a sheikh on a merry go round. “With art; if you know how to present it with a positive vibe, a happy vibe, people will swallow it without noticing it,” he says.

I’m also trying to shed some positive light on religious people like sheikhs because a lot of people are of the mindset of ‘we don’t want to be aligned with them, they’re too religious.’ They’re scared of them.

There is something to be said for radical, controversial artists who want to take a stand, use their work to shock people, and – even if antagonistically – push for a conversation or for change. They can be highly divisive but highly effective. But so can the person who uses the carrot and not the stick - there are two approaches to everything and there are merits to each. It's Malcom X vs Martin Luther King – and which triggered more change? “After the series came out, I had a phone call from a known sheikh in Saudi," recounts Zahid, "He saw the pictures and he loved them. He said ‘please continue doing what you’re doing.’”

This segues into another important element to his work – that he prefers the presentation to be unorthodox. “I try not to hang my stuff on walls. I try to do something different, like float my stuff within the gallery itself or use a format that you don’t usually see."

Another one of his pieces, a deconstructed oil pump titled The Beginning of the End denotes his projected trajectory for Saudi’s fragile oil based economy. “The vision is to stop depending on oil, and go to other sources,” he says. He got an actual fuel pump, dismounted it, deconstructed it fully and then hung it from the ceiling.

With art; if you know how to present it with a positive vibe, a happy vibe, people will swallow it without noticing it.

Since Saudi discovered oil in 1938, the kingdom has propped up its entire economy on it. In fact, Saudi Aramco, Saudi Arabia's state oil company, provides the country with revenues that make up more than 80 percent of the national budget. But between concerns with both the impact and supply of fossil fuels, which won’t last forever, the country desperately needs to begin diversifying its oil-addicted economy in order to avoid withdrawal symptoms down the line – and Zahid’s piece mirrors that much-needed shift. The Beginning of the End

“The piece is fully deconstructed, showing that Saudi is bit by bit getting away from the oil era,” says Zahid, “Then you have the mechanism on the piece – which is still working – which indicates that time and money are running out. Basically, we have until 2030 to really move away from the oil era and get into other productions.”

Saudi Arabia’s landscape – like much of the Arab world’s – is ever-changing, albeit at a slightly more glacial pace than its western counterparts. The kingdom has often been accused of being backwards, misogynistic, economically unsound, and a litany of other pejorative terms. But they are changing, within the framework of their own culture and traditions.

And it’s not that one artist’s work will drive that change or dictate government decisions but with every piece of artistic commentary, every achievement by a person from the kingdom like Raha Moharrak, and every milestone crossed – from women being granted the right to drive to the decree forbidding Saudi government agencies from requiring a male guardian’s consent for women seeking services such as healthcare – change is occurring.

And it is the role of artists to continue to spark conversation – to shed light on issues that matter – to change perceptions, to generate debate. And that’s exactly what Khalid Zahid is doing with his particular brand of artistic expression, using art that is “cheerful, and positive,” to, as he puts it “lure people in,” finding an intriguing way to delineate social, religious, and economic issues in the country. After all, a spoonful of sugar makes the medicine go down right?