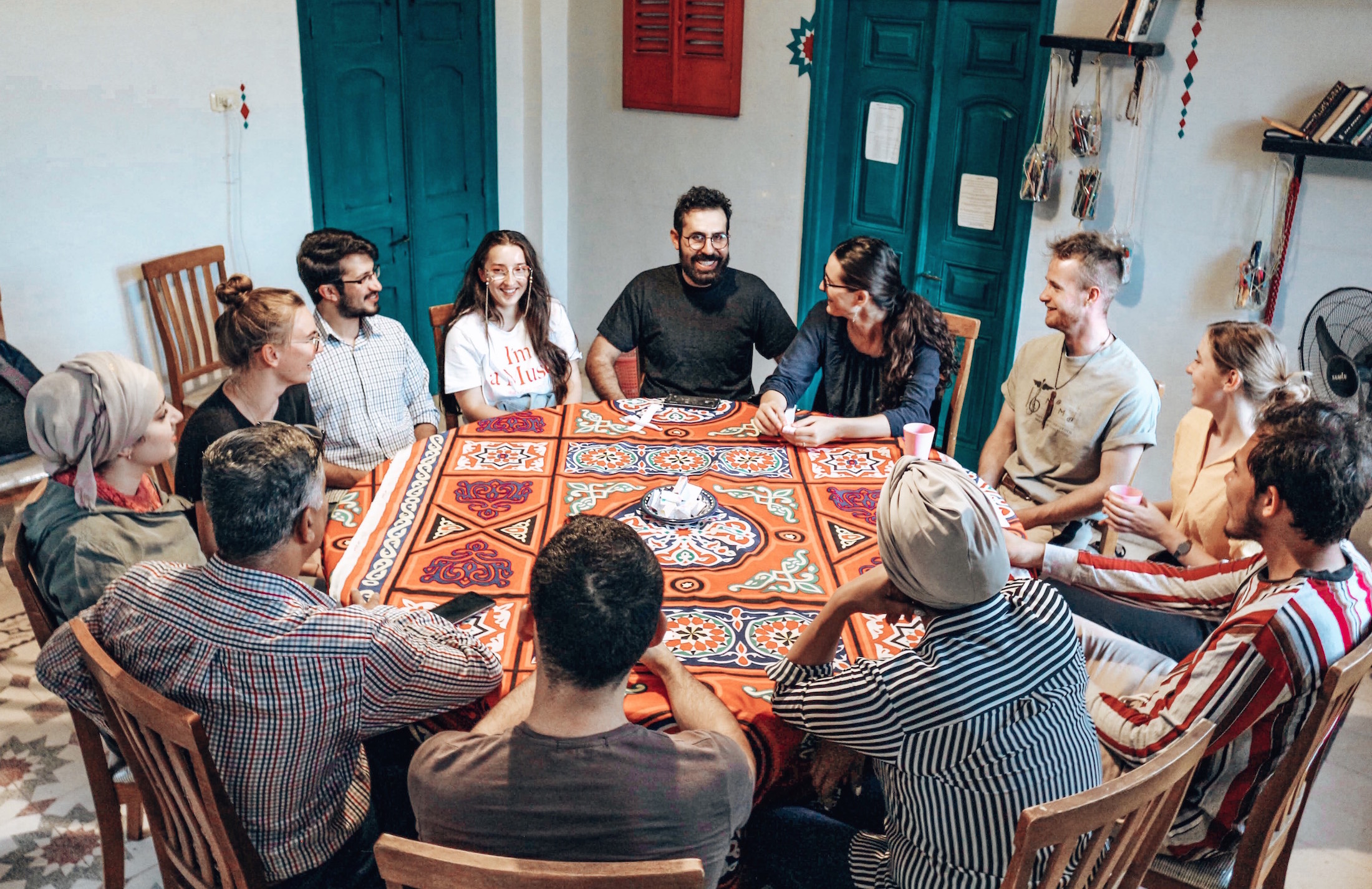 “It’s like you’re used to a room with only one source of light that you know - but then you allow others into it and they start opening windows you didn’t even know existed, letting more light in, and it’s brilliant. And you don’t get that chance often, unless you’re in a context like what Shams Community provides for us,” shares volunteer and visual storyteller Mona Tahboub.

Shams Community, a non-profit organization housed in Amman, Jordan was founded in 2011 as a youth initiative by Saeed Abu Alhassan. The international volunteer-based community aims to facilitate social change by connecting individuals from all over the world, inspiring and empowering them to create positive change in their lives and their communities, usually taking the initiative back with them. The team behind Shams a group of individuals from diverse backgrounds who are doing just that, and their main weapon is communication.

It’s our duty as a people to speak up.

“Put the keywords knowledge, enlightenment, optimism, hope, future and most importantly, light together and you get why I chose the name ‘shams’, literally translating to sun in Arabic. You say ‘Shams’ and it immediately gets people to ask about the meaning, breaking the walls of miscommunication when it comes to the perception of the Arab region,” Shams Community founder Saeed Abu Alhassan tells Scene Arabia. “It’s our duty as a people to speak up. We are not what people think.” Twice a week, a ‘Dinner and Dialogue’ initiative takes place and is hosted at the Shams Premises under the name of ‘Shams Table’. Shams Tables, an idea which is now expanding beyond Amman, brings people together around the dinner table, usually serving home-made food, and an appointed moderator leads the discussion on the main topic of the day. Memorable discussions mentioned by volunteers are those on depression and mental health, the concepts of home and homeland, sexual harassment and bullying, refugees and integration, climate change and environmental issues, gender roles and violence, and even artificial intelligence.

It’s like you’re used to a room with only one source of light that you know - but then you allow others into it and they start opening windows you didn’t even know existed, letting more light in, and it’s brilliant.

Since dialogue, generally, is an important tool in creating healthy communities made up of individuals who understand and tolerate, Shams Community takes pride in the values they stand for: inclusivity, diversity, empathy, tolerance, innovation and sustainability. “It’s a thought-provoking movement and a progressive one at that, because you’re sitting with people from all over the world and sharing a good meal with them, enriching your mind listening to their experiences and perspectives on social issues and topics,” Egyptian-American volunteer Ibrahim Fathelbab tells us.

...breaking the walls of miscommunication when it comes to the perception of the Arab region

Built on the premise that every person has the potential to create both internal and external change given the right tools, the goal behind ‘Shams Table’ is to provide a judgement-free, welcoming and open-minded environment. By promoting this culture of tolerance and self-reflection, they raise awareness about social issues and inspire the conversants to take action. “I realized that conversation can be a means of change, and it can be this catalyst for us to start perception-changing movements, not only in our local cultures but in ourselves. Conversations start internal revolutions and you start thinking about what it means to look at something in a certain way. Once you hear different perspectives, you gain this nuanced understanding of what exactly your perception translates into behavior - how your actions stem from your prejudices,” Egyptian volunteer and dialogue facilitator Mohamed Ramy shares. Palestinian-Jordanian Mona Tahboub, Chief Storyteller for the organisation, says Shams quickly became her second family. “When I first found Shams, my first intention was to improve my communication skills and initiating conversations with others. I find it easier to communicate through visuals and mediums and not speech,” Tahboub tells us. “You only think you know so much until you have the privilege to be exposed to other people’s ways of thinking.” Most individuals involved in the community have already taken or thought of taking action to make some sort of impact in their societies, leading movements and calling for change in specific areas of conflict. Alhassan himself participated in local and international Ambassadors for Dialogue conferences, doing exactly that and using dialogue to do it. “If you don’t talk about assault for example, it starts to become normal. And that’s dangerous,” says Alhassan. Like the - relatively controversial - saying goes: ‘silence implies consent’, but in the sense that people tend to assume lack of response to an action as approval of that action. Since its founding, Shams has developed into a social enterprise that has received national and international awards, including the King Abdullah Award for Youth Achievement and Innovation, Badir Award for Young Jordanian Social Entrepreneurs, the Princess Basma Award for Development Work and Community Service, and the Synergos Arab World Social innovators Program.

I realised that conversation can be a means of change, and it can be this catalyst for us to start perception-changing movements, not only in our local cultures but in ourselves.

Shams Community initially started as a youth initiative called Irbid Youth Volunteers (IYV) in 2011. The original project consisted of youth-led teams and over 100 students identifying social problems and developing community-based solutions. From 2014-2015, and upon Alhassan’s move to Nairobi, Kenya to study Social Innovation Management, IYV rebranded as Shams Community and expanded its operations beyond Irbid, Jordan. Later in 2015, ‘Shams Table’ was born in Nairobi as part of his final project at the Amani Institute, eventually becoming an essential staple for the Shams Community.

In 2016, and after the completion of Alhassan’s degree, the initiative officially moved to Amman, renovated an old house and opened it as the Shams Headquarters, facilitating its new programming, including dialogue sessions, events, workshops, and trainings. About a year later, they started reaching out to and hosting volunteers through the online volunteer hosting platform called Workaway. In addition to their online presence, Shams is still finding locals, expats and artists joining the team through word of mouth. “We don’t come from different worlds, we come from different realities,” shares Tahboub. “I only need to present me to the world, and this is the way you can accept others and respect others and engage with them. Social cohesion.” Earlier this year, Tahboub and Fathelbab got engaged after meeting while volunteering in Shams Community. With the community starting to expand, the team started organising excursions and hiking trips in Jordan, and meet-ups all over the world. People currently hosting or wanting to host and moderate discussions in their home country just reach out to Alhassan and discuss it with him, but he emphasizes and insists on the importance of the training program and online platform being developed to make things easier on the long run.

“A memorable experience of mine was a three-day hike Shams organised to Little Petra. What really inspired me then was Saeed’s ability, and the team of volunteers he has around him, to always be happy and go-getters and always be doing incredible work that puts a smile on people’s faces. And I think that changed something in me where I realised there’s no time to spare or waste on regret,” shares Ramy. ‘Shams Table’ has been expanding globally with hosts in London, Washington DC and Beirut, among other cities. The next step is training whoever’s interested in moderating the discussions through Shams Table, so that it holds the same qualities and is the same - but sprinkled with different voices - wherever you are in the world. Over the past four years, over 120 social topics have been discussed and over 220 events hosted and organized, with 4,000 attendees. They hope to use their current, ongoing crowdfunding campaign to develop.

If you don’t talk about assault for example, it starts to become normal. And that’s dangerous

“Over the past three years, Shams Table has broken even on the set-up, renovation and overhead costs of running its Monday night dinners and dialogues. But there are other event formats we want to pioneer, there are talented people we want to bring on board, there is the bigger mission of globalising our work - none of which can be done on our ticket sales alone. So the funding we secure is crucial to building the future of our work,” Campaign Manager Josiane Smith writes. “Whatever the final funding amount is, the publicity we get through the campaign will help build a critical mass of interest for early adoption of the platform as users and as hosts.” Once you hear different perspectives, you gain this nuanced understanding of what exactly your perception translates into behavior - how your actions stem from your prejudices

By creating and developing the home of Shams into an online digital platform, people from all over the world will be able to host and attend local Shams Tables, creating a global Shams Community. This could eventually turn into a worldwide database of local events, topics, thoughts and initiative ideas shared by real people in real time - but in different continents. Training the hosts in the art of dialogue will be through a printable Toolkit; a ‘playbook’ clearly detailing methods to help people start their own communities around dialogue, connectivity and social awareness. There will also be online and offline training programs for those interested in bringing people together and facilitating meaningful and positive discussions in but not limited to their schools, religious entities, volunteering networks and local communities.

“You realise how important it is to grow personally to be able to nourish another person, let alone a whole society,” shares Tahboub. "You can’t really add to the world around you if you stick to a narrative that is not yours. That is what makes you special. Embrace your narrative.” 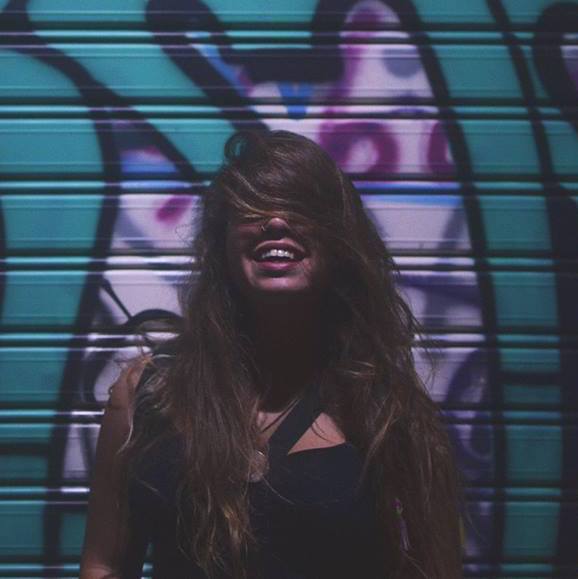 If I'm not running around working on a story, you'll probably find me on the nearest beach.