Rex Chouk is representing Saudi Arabia through his designs and art with his most recent collaboration with a ‘90s favorite. 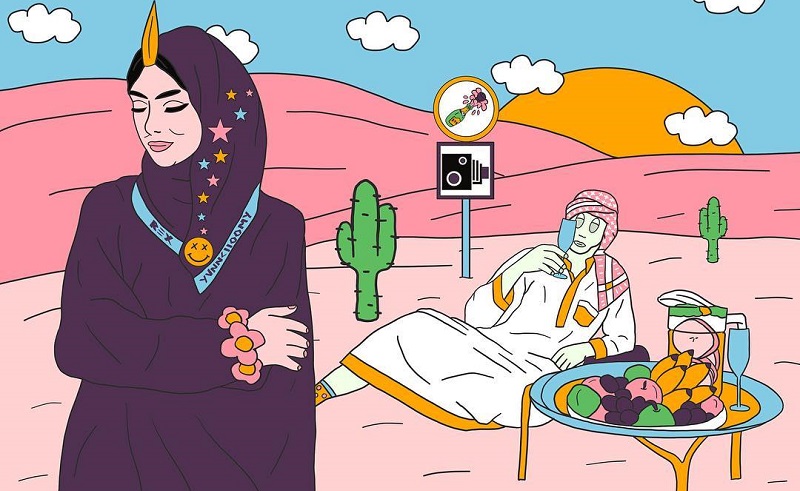 Following no rules and using art as a form of catharsis and self-expression, Saudi Arabian artist Rex Chouk - who goes simply by his moniker, choosing not to reveal his real name - creates works that reflect the millennial experience in the Arab world and outside of it, in the process becoming a distinct voice of cosmopolitan Arabness. Fusing popular culture and Arab influences, his art is as unique as it is eclectic, and speaks to everything in his direct surroundings, from grocery products and consumer practices, to social issues and current politics. Raised in Saudi Arabia, Rex moved to the U.S. at the age of 13 and began to experiment with canvases in 2014, after attending a Keith Haring exhibition, where, as he recalls, he first realised there are no rules in the field, and that he had room to explore and experiment freely in a cathartic "right-brain, left-brain" dance, as he describes it. Based in New York, Rex’s experience as a cosmopolitan artist is most pronounced through his art, which screams cultural fusions and interconnectivity. His art’s eclectic quality prevents it from being neatly put into any singular box, or from being appropriated by any one culture. “I wouldn't consider my work ‘Saudi,’ yes it’s heavily Arab or maybe GCC [Gulf Cooperation Council] inspired but that’s just the mood these days (or maybe always, time will tell). I would consider my work a juxtaposition of the millennial being in a modern world with a whole lot of culture baggage and inner thoughts.” Vibrantly colored and mixing visuals of space and the “real world” - our grocery stores, streets, and deserts set against the backdrop of planetary constellations and meteor showers - his pieces are explorations of corporeality and “being” as a phenomenon in the modern world. His work explores the notion that existence is not just in a vacuum, but is inseparable from and almost molded together with all the products of consumer and popular culture that saturate our contemporary world.

I would consider my work a juxtaposition of the millennial being in a modern world with a whole lot of culture baggage and inner thoughts. Chouk has also been dipping into the world of fashion, with designs created for The Nou Project, a footwear label by Lebanese/Saudi duo Nour Al Tamimi and Basma Chidiac, creating sneakers depicting artists' work with an aim to make art more accessible and functional. Chouk's latest collaboration was earlier this year with Casio's G-Shock, an iconic '90s staple that practically epitomized the fashion of the decade. His style being heavily imbued with '90s aesthetics - including vibrant blues, pinks and purples - blended seamlessly with the history of the brand and its famed colorful variety.

“This is a bucket list collaboration for me. I’m proud of myself! I would imagine [that] whenever the opportunity arises for me to work with brands I love that support the lifestyle I’m about or an important cause, I’d be down to collaborate,” says Chouk. The Saudi artist's collaboration with the global watch brand, came hot on the heels of a growing number of similar projects as more and more powerhouse brands are tapping Arab creators to work with them; just last year, Lebanese contemporary artist Ali Cha'aban released a limited edition collection of sneakers with Nike. Many of these Middle Eastern artists are encouraged to actively involve elements of their own culture in the collaborations they work on. “My artwork usually starts with a simple thought inspired by current news, stereotypes, songs quotes and verses. I then take this thought and mask it with worldly visuals that might diverge perception and provoke judgment,” says Rex. Snowballing from simple thoughts into full-fledged digital artwork pieces, his work ends up gathering diverse influences, reflecting the many cultures he and many millennials inhabit at once, and playing with the different symbols of those cultures in juxtaposition with one another.

I love addressing stereotypes, hidden thoughts, unspoken social conclusions. I’m not with or against [anything]. I just like to highlight what’s not highlighted. His switch to digital artwork came after lots of experimentation, first, with canvas painting. “[Later,] I found myself uninspired to mass produce paintings ever since I moved out of my studio, so I started digitally drawing also with close to zero knowledge. I love the process of creating. It’s a disconnection from “reality”. You lose yourself and the sense of time.” With a deep and profound love for art and its potential, Rex proclaims that “art inspires generations! (Wo)men are mortal, art is immortal.” This is why his art is visual-impact oriented, meaning that his intent is not to preach any ideas or politics in his art, but that his desire is for people to become affected by it, to feel something, and contemplate upon what they saw--simply to "highlight things," express himself, and paint an image of the contemporary world as he understands and lives in it.