Better known by his moniker, The Art of Boo, Lebanese illustrator and cartoonist Bernard Hage has been steadily amassing a cult following with his insightful illustrations that mix criticism and comedy, taking aim at every malaise plaguing the motherland... 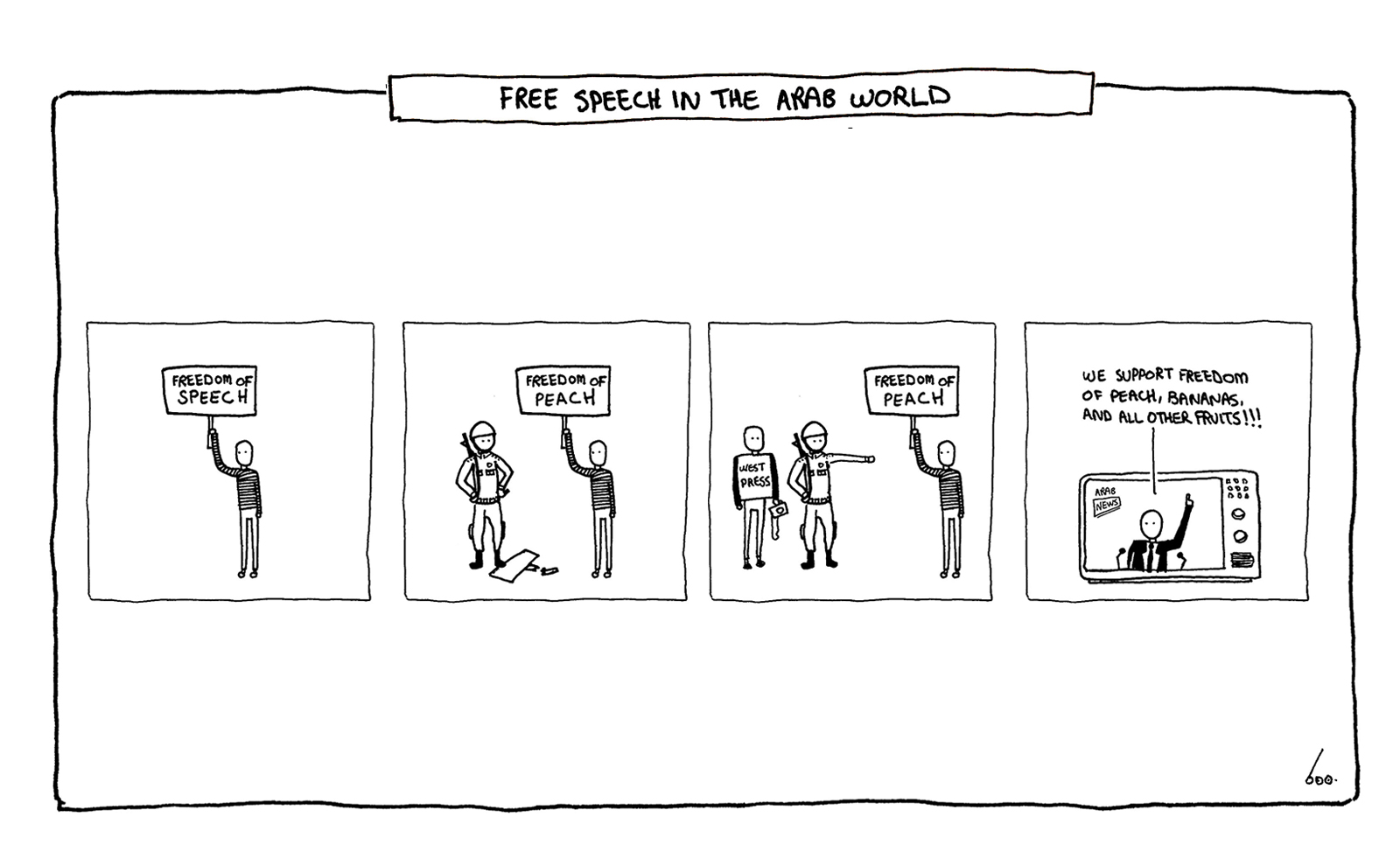 The Arab world is awash with endless issues and idiosyncrasies, injustices and aggravations. It would perhaps be unfair to posit that our struggles are greater than yours; our difficulties are more difficult than yours; our concerns are just so much more concerning than yours, because sometimes they might be, but who are we to judge? It's all relative, after all. But they are, most certainly, rather unique to this part of the world.

And while we do have a one-size-fits-all section of problems to peruse, many of them are particular to each individual nation. Take Lebanon for instance. Lebanon’s garbage crisis is different to Saudi women needing a glorified babysitter in the kingdom; its inability to form a government for half a year is not quite the same as the very firmly formed Egyptian government’s systematic silencing of all dissidents. And one of its most unique comic talents commenting on all its quandaries, Bernard Hage, is not the same as anyone we’ve seen out of the region so far.

I’m very realistic, which can be taken as pessimism in today’s social norms. And that’s totally fine by me [...] Optimism frightens me.

Better known by his moniker, The Art of Boo, Hage is a Lebanese cartoonist, who has been steadily amassing a cult following with his insightful and - for lack of a less millennial term - on point illustrations that mix criticism and comedy, taking aim at every malaise plaguing the motherland. If there were ever a time to accurately use the term ‘dark humour’ Hage’s work would be it. His Instagram feed is a cavalcade of quirky, darkly comedic cartoons. The images are basic; scrawny stick figures drawn in black ink but it’s Hage’s ability to hone in on the central issue and summarise it into a square that has quickly won him a crowd of people who can instantly relate. He takes on traffic, a paralysed government, pollution, sectarianism, discrimination; you name it. “How did I get into comic illustration? Through the backdoor,” he says with same characteristic sarcasm that threads its way through his work. “It was never something I intended or I was taught to do. I’ve always had interest in comic strips and editorial cartoons, how powerful or hilarious a message can be in just one picture or one caption.” He graduated with a Master’s degree in graphic design, and worked as an art director with advertising power players like BBDO and Leo Burnett before “moving to my couch when I figured I don’t want to spend the rest of my life trying to convince people to buy products.”

I’ve always had interest in how powerful or hilarious a message can be in just one picture or one caption.

Capturing current issues through cartoon has however, long been something that piqued Hage’s interest. “Growing up I used to wait for the caricature section in the 8 o’clock news just to see what Pierre Sadek had to say about the daily events, and that was really an essential inspirational part of my childhood,” he recalls. “I think the first cartoon I drew was a couple of years ago, and it showed a patient lying down next to his therapist, and the latter is asking: ‘I’m going to show you a series of images, tell me what first comes to mind. The image the therapist held said: ‘You are a failure’. I received lots of positive reactions and people seemed to like it, so I started doing more cartoons inspired by daily struggles.” Eventually his work began to get noticed, in particular by L’Orient Le Jour, one of the leading local newspapers in Lebanon, where he now publishes weekly cartoons. Most recently, Hage decided to publish a book, inspired by when his brother used to tell him bedtime stories as a child to distract him from the ruinous sounds of war happening outside in Lebanon. And true to his nihilistic sarcastic nature, the book, titled ‘In the Dead of Night: Bedtime Stories for Grownups’ is an unusual amalgamation, taking a traditionally innocent and wholesome format and injecting it with a morbid, almost sinister cynicism. A combination of poems and short stories, with accompanying illustrations, the whole thing is gleefully macabre. In fact its website doesn’t even function until after 10 PM, because not only did the entire process of creating the project take place during nighttime, but also because he believes that “the reader would be in a peaceful state of mind; at night the quiet environment enhances your concentration and invites you to express your feelings.”

A quick skim through the book will reveal poems like the one below:

Amanda is American
And Nour is Arab.
They are both ten years old.
Amanda knows how to plant a flower,
And Nour knows how to load a gun.
Amanda’s favorite flower is the Yellow Broomrape
Which grows in the Arabian Peninsula,
And Nour’s favorite gun is the Colt 45,
Manufactured in the United States.

Fucked up is this world,
Thought Nour.

Given the rather extreme nature of the book, Hage self-published the work, enlisting the help of crowdfunding platform, Music Art Design. In the Dead of Night undoubtedly goes a step, or six, further than his usual cartoons. Those press on present issues with sharp reflections; the book pushes the boundaries of comedy, sinking into much darker territory. But for centuries, comedians have used tragedy as a springboard and played it up for laughs that almost come with accompanying grimaces. And that, whether it’s his concise cartoons that encapsulate Lebanon’s constant problem, or his undeniably despondent book, is Hage’s strength as a comedic creator. Where did the moniker ‘Boo’ come from?
‘Boo’ is the sound you make when you want to scare someone, or when you’re unsatisfied with something, you boo at it, which I believe fits well with the nihilistic/dark humour-ish tone of voice I use in my work. Plus I wanted to differentiate between the funny Bernard that everybody knows and Boo, the new guy on the block who’s aware that not everybody will be fond of what he has to say. Bernard is the kind of guy who would be laughing most of the time, and takes pleasure in the little things, like riding a bicycle in the sun. Boo is the kind of guy who would rather stay home and read, first because if you go out there’s a high risk you might see people, and second, because a ride in the sun doesn’t really say much to him he will convince you to stay in with him instead because the sun will explode one day and kill us all, and he’s not willing to invest emotions in a love story we all know is going to end tragically (according to science). So you can imagine what it’s like having these two guys in one head, and the gravity of every decision I need to make, like where to eat or which socks to wear.

Boo is the kind of guy who would rather stay home and read, first because if you go out there’s a high risk you might see people, and second, because a ride in the sun doesn’t really say much because the sun will explode one day and kill us all, and he’s not willing to invest emotions in a love story we all know is going to end tragically.

How would you describe your work in your own words?
I think my work is genius. And modest. I’m the best.

Would you consider yourself a pessimist?
I’m very realistic, which can be taken as pessimism in today’s social norms. And that’s totally fine by me, happiness isn’t very good for the economy anyway. You see, you get someone to have plastic surgery by highlighting their physical flaws, or you get them to buy a new smartphone by making them feel like they are being left behind.

Have you ever noticed the people from Coca-Cola commercials? That big exaggerated smile on their face? Never in my life I’ve seen someone this happy to drink sugar dissolved in colored sparkling water. Optimism frightens me.

...when the tocsin sounded, we missed it because we had our heads stuck deep in the ground in search of more oil wells. And once oil was found, we exchanged it for money, then we used that money to import cultures from the west. What impact do you think your work has? What impact would you like it to have?
Um, I think some people easily relate to the work I do - I can see that from the amount of times my work has been shared. We all go through the same struggles, and I tend to talk about these struggles out loud using my sort of humor, so I guess it can be an opportunity for some to share my work as a statement for what they’re going through. What impact would I like it to have? Well, not that I’ve daydreamed about this before, but I would like to wake up one day to a text message from the Pope that says: ‘Dude, you literally saved the world.’

Can you tell us a bit about your book, In the Dead of Night? What prompted the idea?
In The Dead of Night - Bedtime Stories for Grown Ups is my first book of illustrated short stories which is accompanied with its original music soundtrack. It started four years ago with a poem I wrote for my grandmother after her death, then I composed a piano melody that’s supposed to be the soundtrack of her soul leaving earth.

I thought it was interesting to compose music for a text, not images or films, and so I started writing more poems and short stories and composing more music, eventually I ended up with a book and soundtrack.

The stories tackle different topics like marriage, love, religion, politics, careers, etc. and the illustrations were hand-drawn then rendered digitally. The book was launched on the 17th of November 2017 at KED art venue in Beirut, where we built a big bedroom installation from scratch, and there the music soundtrack was played live for the first time. Where do you see the future of Lebanon, or even the Arab world?
I believe that we Arabs have failed to understand the importance of preserving our culture and heritage. And when the tocsin sounded, we missed it because we had our heads stuck deep in the ground in search of more oil wells. And once oil was found, we exchanged it for money, then we used that money to import cultures from the west.

Culture, education and heritage are the pillars on which a nation’s future is built. Pardon my lack of optimism here, but I believe we are culturally bankrupt...

You don’t import culture, gentlemen, you export it. Culture, education and heritage are the pillars on which a nation’s future is built. Pardon my lack of optimism here, but I believe we are culturally bankrupt, and when the blizzard of the world crosses our threshold there will be nothing for us to hold on to.

How the MENA’s First Dragon was Created