A Sea of Motifs: Into the Surrealist World of Arab Digital Collage 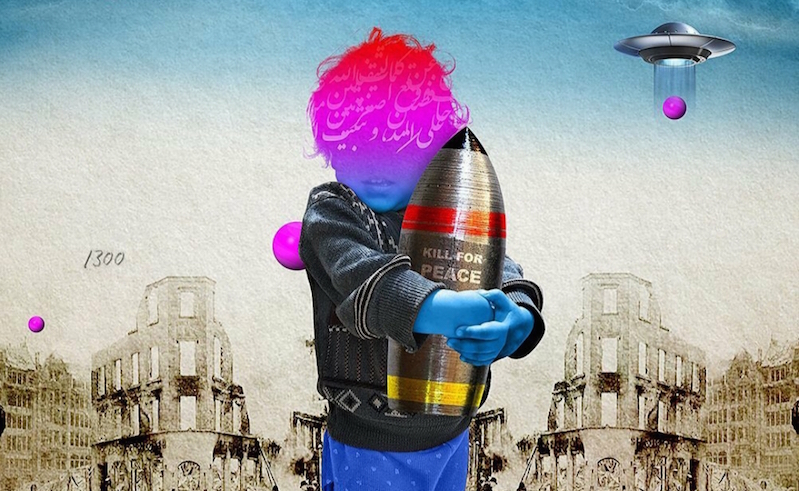 How long does it take you to look at an artwork? Double it (or triple it), and you’ll get the amount of time it takes to decipher the abstract combination of objects that the new Middle Eastern collage movement imagines. I’m sure you know what I’m talking about...you’ve seen it on your feed! You’ve seen the likes of @Arabic.pop.art, the page that has almost monopolised the Middle Eastern collage scene with over 200k followers from across the Arab world and beyond.

Collage art has been categorised as an avant-garde movement since its conception. Its abstract and surrealist combination of objects in time and space has attracted a niche audience interested in reading between the lines, and beyond the superficiality of visuals. Initially, it took on a material form where physical cut-outs were glued together. Today; however, digitisation has made the creation process so much easier. The production of digital collage art has been largely scaled; allowing daily content output by the imaginative, without any compromise in quality!

I talk about a personal past that I experienced in Lebanon, but also a collective one that Lebanese and Arab women in general experience.

Initially, I wanted to title this article “Confrontational Escapism” to describe the binding theme between the digital collage artists I had the opportunity to interview. But the more I thought about it the more I realised the phrase actually reflects a larger reality the Middle East is experiencing, one mediated by the captivating digital collage work coming out of the region. It is a concept I would rather unpack by exploring the work of three such artists: Mohammed Awwad, Adra Kandil and Nour ElDeen ElMessahry.

With exhibitions in Qatar, Oman, Germany, and the UK, Mohammed Awwad is an internationally-acclaimed Jordanian artist and arguably the Middle Eastern reincarnation of Salvador Dali. A trip into his mind uncovers the depths of his illustrations. While his works are undeniably visually stimulating, they are equally as rich in their connotative meaning.

“You have to ask how did he combine this and that...and the answer is a certain degree of craziness. Any artist has to be crazy to some degree,” Awwad says of the incentive behind one of his pieces. 'The Corrupt Show' by Mohamed Awwad

“Our world is currently drowning in plastic,” the collage artist explains. “I wanted to say something about it.” This was his inspiration for 'The Corrupt Show,' one of his most recent works. The collage imagines the earth wrapped in a plastic bag, dangling from a magician’s hand. “We’re all just idle, we hear about the world ending, children dying, disease spreading, and we simply consume the content from our living room couch. It’s a theatrical show.” He continues explaining how the media only offers a small excerpt of what is really happening in the world while consumers wait for someone to magically fix the world. A little girl hugging a “peace missile” in a place that’s falling apart. In “Destinies,” Awwad expresses the situation in Yemen.

Awwad’s pieces are laced with intertextual motifs and symbols. Generally speaking, the artist tries to discuss universally relevant issues. His art stems from a regional root with its use of symbolism and motifs, but deals with international social, environmental, and political issues.

The act of looking at his digital collages is similar to piecing a puzzle together in order to see the bigger picture. The end product is usually sublime in its delivery of painful truths and realities. The artist explains that digital collage doesn’t necessarily need to have an underlying message, but stresses his own commitment to sending one.

The path of visual connotation is one that Adra Kandil also embarks on in her work. Known by her Instagram handle @dear.nostalgia, the Lebanese native has a different method of delivering messages. Nostalgia, defined as “a sentimental longing or wistful affection for a period in the past” perfectly describes the condition of Kandil’s works. “As a child, I always heard stories of a better past, a golden age that I never experienced myself. It is one that I always think of as more sentimental and material than the one we live in today,” Kandil tells me, “it is almost like an ode, or a letter to the past.” “I talk about a personal past that I experienced in Lebanon, but also a collective one that Lebanese and Arab women in general experience.” Her work encompasses a wide range of topics, from female economic struggles to the struggle for independence and freedom from decadent social standards. She combines the past and present on one hand, and the East and West on the other. Although born and raised in Lebanon, Kandil confessed the Westernisation she experienced through her education. It is a phenomenon that has become very common amongst Middle Eastern youth, and one she tackles throughout her work.

Kandil’s use of text serves to direct the audience’s interpretation of her pieces. The artist's particular use of Arabic typography has also become one of her identifying trademarks. The artist explained the sentimental weight of the text, “after the Lebanese revolution, Arabic returned to Lebanon. It was almost like an Arabic language revolution. Everyone realised it is our mother tongue, it is our roots, and it is who we are.” While surrealist in her mixture of time and space; Kandil describes herself as a realist artist, a term similarly adopted by Noor ElDeen ElMessahry. Messahry is an anonymous, yet highly popular figure in Iraq. His works gained attention as a result of their unapologetic humour and parody of unhumorous issues. While many of his works are centred around the bloodbath in Iraq, he simultaneously discusses globally relevant issues. In honour of censorship, self-inflicted or otherwise, I'll leave this last collage by ElMessahry to “speak for itself”. “I have to be cautious about my identity because of the legal restrictions surrounding political opposition in Iraq,” he said. Unfortunately, censorship is an issue that plagues Middle Eastern artists, albeit to different degrees.

It is no secret that Mohammed Awwad and Adra Kandil similarly discuss sensitive issues. However, they both agreed that their indirect approach allows them to indirectly deliver messages that would be problematic to address directly. For the Middle Eastern collage artists I was fortunate enough to interview, their abstract surrealism was their vessel in expressing the harsh realities of daily life. Their work is visually escapist, yet theoretically confrontational. It is a condition we all physically, mentally, and emotionally experience as Arabs.