We sit down with Lebanese playwright and theatre director Issam Bou Khaled who has unveiled his latest stage masterpiece, Carnivorous, at D-CAF. The play explores themes of family, tragedy, and strife, while at the same time, mirroring Lebanon's contemporary sociopolitical climate. 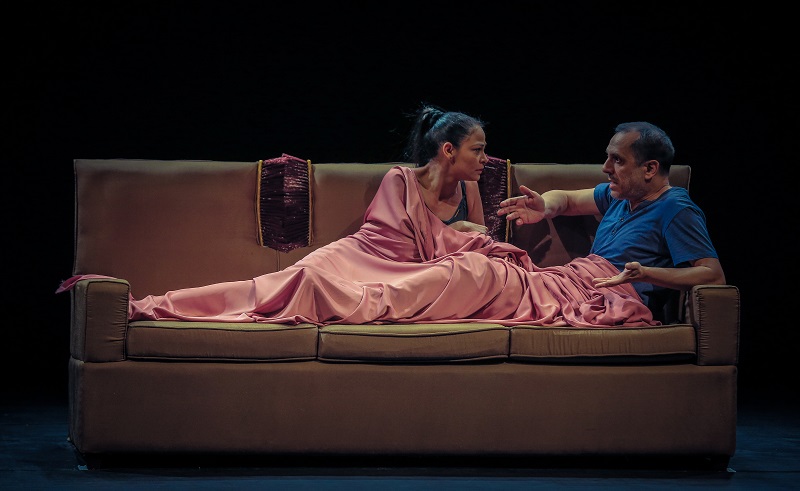 Nothing shocks Issam Bou Khaled anymore. He has grown used to Beirut’s never ending turmoil, cacophony, and cognitive dissonance. In a way he is the typical Lebanese artist reaching far into the depths of society’s despair for laughs and jokes that ring tragically true. Sat in the AUC Falaki Theatre’s auditorium, sweat beads glistened on his forehead as he struggled to verbalize the many flaws of Beirut, the city that inspired his entire body of work, down to Carnivorous, his latest play.

The Lebanese artist has been acting since 1991, but his directorial debut came in 1997. His rise to fame as a playwright and theatre director came as Lebanese theatre was at its lowest ebb, in the midst of multiple military campaigns by Israel and deep internal divisions. Bou Kahled’s uncompromising integrity and biting humour in the face of crisis is partly why he has been able to give Lebanon some of its most remarkable plays, like Banafsaj (2009), March (2004), and Arkhabeel (1999). Carnivorous, in which he also stars, is Bou Khaled’s latest black comedy to wow Egyptian audiences on their home turf, as part of the Downtown Contemporary Art Festival's 2018 edition - an annual festival that sees contemporary artists from all over the world perform in venues around Downtown Cairo. The play opens with a wife (played by Bernadette Houdeib) fellating her sleeping husband (Bou Khaled) who wakes aghast from a nightmare.

What’s wrong?
I had a nightmare.
You fell asleep while I was blowing you!?

Hilarity then ensues as the interfaith couple struggles to initiate sex and rekindle their intimacy. “You’re impotent,” she shouts, “and you’re uninspiring,” he retorts. Their mudslinging comes to a halt when a suicide bombing shakes the Lebanese capital and news reports name the assailant: their son. As they sat prostrate on the same couch where they had just failed to copulate, answering a belligerent counterterrorism detective’s questions, their once dormant resentment for one another bubbled back to the surface. They revisited their quotidian familial interactions, searching for answers and scraps of evidence they might have overlooked, but they came up short. Instead, their mutual emotional abuse allegorizes Lebanon’s socio-political divide, whereby a snarky remark is cause for sectarian strife. At one point, Bou Khaled’s character accuses his wife of radicalizing their son for teaching him to perform Salah (Muslim prayer). “In places that are ethnically diverse, people turn into monsters, they forget that there are victims and people that died. They stop talking about the attack and start talking about their frustration and micro-transgressions against each other,” he says.

In places that are ethnically diverse, people turn into monsters, they forget that there are victims and people that died. The play then takes a surreal turn when Houdeib’s character is raped and killed by the interrogator as her husband looks on, perfectly capturing the absurd cruelty and betrayal that mar civil discord in Lebanese society. “We in Beirut – of course not just in Beirut, everywhere else as well – have lived through many suicide bombings that are followed by reactions that are even more violent than the attack itself,” he explains.

We in Beirut – of course not just in Beirut, everywhere else as well – have lived through many suicide bombings that are followed by reactions that are even more violent than the attack itself

Carnivorous reaches its climax when police discover that the couple’s son was in fact a victim of the attack, not its perpetrator as initially believed – he was killed while trying to stop the terrorist from detonating his explosive vest. At which point, the detective lifts his eyes off his phone screen, looks at Bou Khaled’s character, and says: “You should be proud of him.” Stripped of the context in which it is set, Carnivorous is a hackneyed parable about prejudice that harkens back to Tennessee Williams’ A Streetcar Named Desire. It is easy to dismiss Carnivorous' tragic climax as tawdry and unoriginal melodrama, but Bou Khaled merely lifted the tear-jerking ending from Lebanese society's playbook, offering some cold, hard truths about the country's deep political polarisation at a theatre near you. “I collected stories that happened around the times of suicide bombings, so many instances of suspect name mix-up, revenge attacks against people who have nothing to do with the assailant – then they realize, ‘no it wasn’t him, he was a victim.’ So that’s what we played on,” he recounts.

I collected stories that happened around the times of suicide bombings, so many instances of suspect name mix-up, revenge attacks against people who have nothing to do with the assailant – then they realize, ‘no it wasn’t him, he was a victim.’

Another social mutation that resulted from Lebanon’s political unrest throughout the past 3 decades has been a form of segmentation, the brunt of which was borne by the country’s most vulnerable. During Israel’s 2006 invasion of Lebanon (the Tammuz War), the most vulnerable in Southern Lebanon – Beirut’s considerably less glamorous neighbours, not only lost their lives, but even in death, their remains were reduced to propaganda tools. It came to be known as the ‘2006 Lebanon War Photographs,’ which namely involved Salam Daher, who allegedly moved the bodies of dead children to stage photos for the press, and former Reuters photojournalist Adnan Hajj, accused of digitally manipulating pictures depicting the conflict for Hezbollah propaganda purposes.

In Carnivorous, Bou Khaled lambastes the architects behind the Tammuz War’s heart-wrenching images by playing one to, once again, hold a mirror up to Lebanese society. “They’re prepared to move the bodies and human remains to produce a nice photo, to fit the frame. I used him [his character] to illustrate this dynamic in which everything becomes normal, routine,” he says, aghast. “And then this dirt, this rot, starts to surface, that we’ve been hiding. We tend to view society as if it’s perfect - nothing wrong with it, but in reality it’s rotting from the inside.” It is not unusual for this generation of Lebanese theatre directors and playwrights, Jalal Khoury’s intellectual descendants, to instil their politics into every scene and every line. Like most contemporary artists, Bou Khaled lives and dies by his politics - what separates his generation from their antecedents is time, but not so much the context. “The plays I did in the late 90s, like Arkhabeel and March, if I was to repeat them, they would still speak to our time. That makes me sad because it means that nothing is changing in our lives. Since then, this is the tragedy that hasn't ended. The destruction from these eroded societies, it doesn’t change,” he says despondently.

Time may be linear, but Lebanon’s history is not, making Bou Khaled’s and others’ work the only tangible, and perhaps even the most accurate, chronicle of Lebanon’s contemporary socio-politics. In his attempt to make a stage adaptation out of Lebanon’s reality, Bou Khaled dissects the country’s human landscape and its warring factions, the camaraderie and hate that call it home.

Overall, Carnivorous earns it stripes with sound observations and commentary, where Bou Khaled attempts to tell a simple story that purports to synopsize the reality of a very complicated nation.

Wednesday Addams is loosely based on her. Airborne neurotoxins were her idea.