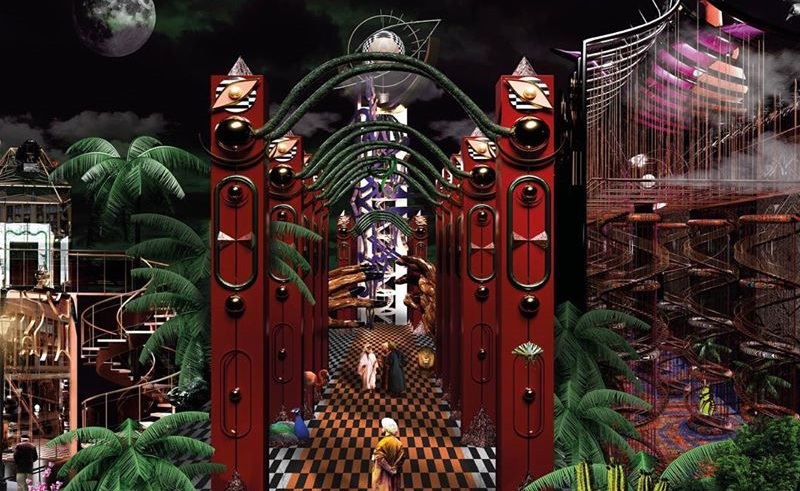 During the so-called “Arab Spring”, art flooded most public spaces in each of the countries involved, from Egypt to Syria and Tunisia. With murals, graffiti, comics, videos, and installations, art began to serve as one of the most essential – as well as visible, accessible and powerful – platforms of expression and socio-political resistance.

Artists across the Arab diaspora – from Syrian, to Yemeni, to Egyptian – began to follow suit, echoing the sounds of the revolutions in their countries of origin, and giving birth to themes that have now become trademarks in the scene: migration, borders, displacement, exile and the homeland. But an essential part of the ‘Arab’ diaspora is the Afro-Arab population, coming most dominantly from Sudan, Mauritania, and Libya. A minority in comparison to other Arab diaspora populations, their presence in the art scene is, unfortunately, even more marginal.

For Afro-Arabs like the Sudanese, the multiple waves of hybridity are already there... but I'm interested in the morphing of that third space when it's taken to the Western world. How do I express what occupancy in an Afro-Arab-British place is like?

British-Sudanese artist, Rayan El-Nayal, is putting Afro-Arabs on the map as she dives into the aesthetics of the 'third space' that they occupy as they live, "between here and there, the West and the East, Africa and Arabia," in her project, 'A Magic Realist Afrabia.' With Afro-Arabs already occupying a complicated space – not fully identifying with ‘Arabs’ or assimilated with them, nor with ‘Africans’ – the addition of yet another cultural layer urged El-Nayal to discover how that translates into the physical setting in which all of that comes to coexist in new and very interesting ways.

"For Afro-Arabs like the Sudanese, the multiple waves of hybridity are already there, [and I] don't think it's necessarily exclusive to ethnic hybridity either, as your identity is more than that," El-Nayal tells us. "But I'm interested in the morphing of that third space when it's taken to the Western world. How do I express what occupancy in an Afro-Arab-British place is like?"

The third space is the in between space, between here and there, that makes you feel that you belong everywhere and nowhere at the same time

Coming from an architectural background herself and living in London as a Sudanese all her life, she was more than adept to do so. Her tool to explore that space of difference is magic realism, originally a literary tool, deeply embedded in Latin-American culture – its forefathers included Latin American authors like Gabriel Garcia Marquez, Jorge Borges and Miguel Asturias – that merges myth and fantasy with reality.

In art, it is visually a hybrid – “an oxymoron that people use to explain paradoxes within our everyday lives,” as El-Nayal explains it. That’s what her works look like – a mesh of cultures and influences that translate through the genre- and style-bending combination of real and fantastical colors, shapes, and motifs she uses. El-Nayal reimagines Church Street, a street in London, where she lives, which intersects with the famed Edgware road, known to Londoners as ‘Little Arabia,’ or ‘Little Cairo,’ where a huge amount of Arab businesses, cafes and restaurants are located.

I’d love to start creating drawings on what future hybrid urban places in #NewSudan would look like; [to imagine] what would happen if tourism boomed and the Sudanese started re-telling their history.

Its history can be traced back to the 19th century, when immigrants from the Ottoman empire settled in the city, according to The National. After the 1950s, immigrants from Egypt, Lebanon, Iran and Algeria trickled in as well, and since then it has become a locus of Middle Eastern cuisine and culture in London. At the end of the street, however, lies a much less documented place, Church Street, where El- Nayal says “a very dynamic, diverse hybrid urban place, and more importantly, an Afro-Arab community” lives. The street exhibits traces of the ‘Little Arabia’ that is Edgware road, which contrary to how it is often portrayed, is not an enclosed bubble, but rather, a space of a continued British-Arab culture that is not bounded or bordered, but has echoes in many different corners of the city.

...though I don’t share your ethnicity, I can still relate to you because we will occupy the third space, the in-between, the neither here or there

She reimagines the street with a ‘gate of Afrabia,’ drawn from the Nubian gates and doors found in Northern Sudan, with post-modern architecture and patterns in place of those of Nubia. She used the existing ethnic enclaves - spaces where immigrant communities have settled and are in relative closure and separation from other communities - of London, which are not that far from the fantastical and mythical images she paints in her work, as inspiration. Nubian gate in Northern Sudan [left] and the gate reimagined in Gardens of Afrabia by Rayan El-Nayal [right].

But El-Nayal’s project is not about that enclosure or lines of difference and separation, rather the exact opposite. Her works show how cultures end up meshing into one another when people of different ethnic identities exist in one space. Beyond that, she also explores the way ethnic identity has been used in art to reflect its fluidity –“The fact that artist and novelist globally were all able to draw from the same theories [such as magic realism] says a lot about ethnic hybridity and multiculturalism. It says that though I don’t share your ethnicity I can still relate to you because we will occupy the third space, the in-between, the neither here or there. There is a sense of unity in that – an opportunity to re-tell your own history, but through expressive format instead of a literal one," she explains.

That opportunity, used here by El-Nayal through magic realism, is also useful in imagining a different social and political landscape – in this case, the changing landscape of Sudan following the revolution which started at the end of last year and has culminated in the establishment of a new transitional government. For El-Nayal, her desire to imagine ‘Afrabian’ enclaves in London stems from her own personal interest in the multiculturalism that exists within her own community in the U.K., but in a continuation of her work, she hopes to later flip the narrative by re-imagining Sudan as an 'urban hybrid'. “I’d love to start creating drawings on what future hybrid urban places in #NewSudan would look like; [to imagine] what would happen if tourism boomed and the Sudanese started re-telling their history.”