Arabs are making waves at the central exhibition, national pavilions, and independent exhibits. 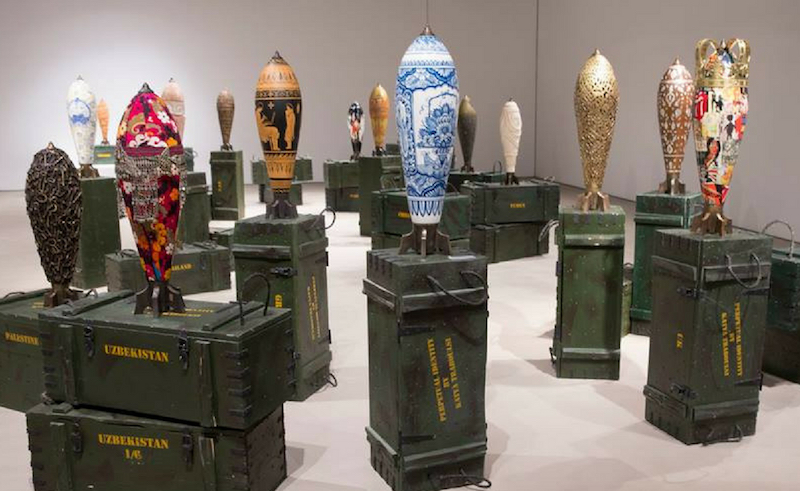 The so-called 'Olympics of the art world' are upon us once again. First established in 1895, the festival is held biennially (in odd-numbered years), and brings thousands of people to the different installations all over the city of Venice.

Under the title of “May You Live in Interesting Times,” this year’s central exhibition is curated by Ralph Rugoff, the director of London’s Hayward Gallery, reflecting the ever-changing current state of world affairs.

Identity is a force that no war can eliminate. It bounces back inevitably

We've collected the full list of all the Arab contributions to the festival, starting from the independent exhibitions, to the national pavilions representing 6 different countries, and finally read until the end to find out which 3 Arab artists were featured in the central exhibition itself... Lebanese artist Katya Traboulsi's Perpetual Identities will be featured in Anima Mundi's Its Liquid International Art Festival, which is running until October. 46 hand-crafted replicas of Lebanese war bombshells are adorned with colourful patterns, beads and sculpted forms. Each of these bombshells take on a different iconography which is associated with a national identity.

"Identity is a force that no war can eliminate. It bounces back inevitably," writes the artist on the purpose of the series. Through the odd juxtaposing of ornate embellishments on shells, she communicates the resilience of culture. In addition to the biennale itself, there are exhibitions and collateral events running alongside the main pavilions. Bahrain's contribution - curated by Amal Khalaf, Tasneem Al Shurougi, and Kaneka Subberwal - was The Wait, an exhibition which showcased the work of 7 Bahraini artists, across disciplinary interests and different media, Hasan Hujairi, Ghada Khunji, ‘Bahraini Danish’, a Bahraini-Danish art cooperative, Mariam Al Noaimi, Nasser Al Yousif and Hala Kaiksow.

The Venice Biennale has been, for over 120 years, one of the most prestigious cultural institutions in the world.

“2019 has been particularly rewarding for our efforts to take the beauty of Bahraini contemporary art to the world,” said Kaneka Subberwal. “The Venice Biennale has been, for over 120 years, one of the most prestigious cultural institutions in the world. Established in 1895, the Biennale has an attendance today of over 500,000 visitors at the Art Exhibition. The Bahraini artists shall be exhibiting in the historic Arsanale, an art complex that was formerly a centre for Venetian economic power, dating back to 1150.”

THE NATIONAL PAVILIONS: THE GOOD, THE COOL, AND THE UGLY The kingdom is returning to the Biennale after an eight-year hiatus, with a host of works by Saudi professor and artist Zahrah Al Ghamdi. Curated by Saudi artist and lecturer Eiman Elgibreen, the installation After Illusion reflects Al Ghamdi's trademark style of making site-specific installations using clay, sand, and leather. Because of the naturalistic element of her work, Al Ghamdi has been considered a pioneer of land or 'earth' art - artworks that focus on and are made of materials from the land - in the kingdom.

“[Al Ghamdi] starts from a medium that recalls abandoned spaces from her childhood, and reshapes it to give it a new life by making it part of her present space, and thus her future memory," says Elgibreen.

Her work is meant to "reflect the memory of past traditional architecture of southwest Saudi Arabia and to explore this memory with emphasis on poetics,” according to the artist. This year's UAE pavilion is led by Nujoom Alghanem, renowned poet and filmmaker. With eight critically acclaimed poetry volumes, an award-winning filmography, and a 30-year career of furthering gendered and feminist discourse through her art, her video installation Passage, curated by Sam Bardaouil and Till Fellrath, is no exception to her socially-informed career.

As a woman, I have found it fulfilling to focus on extraordinary female stories from our society or the Arab world that are worth being highlighted.

"The forms and subjects of my practice have been shaped by my personal experience within the context of a rapidly-transforming society," explains Nujoom Alghanem. "The individual approach in which I have had to resolve the tension between tradition and modernity, has deeply impacted the content of my work as an artist, and is embedded in my writing and filmmaking. As a woman, I have found it fulfilling to focus on extraordinary female stories from our society or the Arab world that are worth being highlighted." The exhibition is also stretching borders by including invited non-Syrian artists, whose dialogical dimension of their works transcend national borders. Of the Syrian artists, the exhibition brings an eclectic approach to modern Syrian art, including Saad Yagan's focus on the presence of the humanitarian, Ibrahim Al Hamid's inspiration by local traditions, Abdalah Abouassali’s realism, and Saed Salloum’s abstraction and surrealism. Danish-Palestinian artist Larissa Sansour is bringing futurism to modern Palestinian art with Heirloom, an exhibition comprising of a two-channel science-fiction film, a sculptural installation, and an architectural intervention, inviting the viewer into a dark universe.

“The film, entitled In Vitro, is staged in the town of Bethlehem decades after an eco-disaster," writes Sansour. "The dying founder of a subterranean orchard is engaged in a dialogue with her young successor, who is born underground and has never seen the town she is destined to replant and repopulate. Inherited trauma, exile and collective memory are central themes." Curated by Tamara Chalabi and Paolo Colombo, this year's Iraq Pavilion showcases the work of Kurdish-Iraqi artist Serwan Baran in Fatherland. The exhibition, commissioned by the Ruya Foundation for Contemporary Culture in Iraq, includes large-scale works, acrylic paintings, and mixes curatorial texts with a series of poems and original letters from the 1980s written by Iraqi soldiers and collected by Baran.

“Fatherland explores the relationship between man and his homeland from the point of view of a soldier," write Chalabi and Colombo. "It relates the trauma of several generations of men in Iraq, living first under a cruel dictatorship, which exploited them as mere cannon fodder, then enduring the aftereffects of this dictatorship, confrontation with and attack by the West, and later attack from within.” This years Egyptian pavilion - curated by Ahmed Chiha - is khnum across times witness. For the artists, the exhibition might be a seamless (or intentionally unsettled) blend of the ancient and modern, a commentary on continued versus disrupted memory and civilisation.

THE CENTRAL EXHIBITION: MAY YOU LIVE IN INTERESTING TIMES Palestinian artist Rula Halawani is presenting works from four series, The Wall, The Wall at Night, Gates of Heaven, and For My Father as part of the main exhibition May You Live in Interesting Times curated by Ralph Rugoff. The Canada-educated Jerusalem native has had a long career of representing the Palestinian struggle in alternative, radical ways.

Of For My Father, Ayyam Gallery wrote: "Creating a photographic record in remembrance of her late father, Halawani revisits several sites throughout historic Palestine, specifically the scenery that shaped her childhood memories. In the ghostly images of the series, the rolling hills, seashore, and traditional neighbourhoods of the artist’s youth are distorted through the lens of her camera as she struggles to identify what was once familiar. Invading industry now defines the horizon. Abandoned homes are shown in a gradual process of deterioration, overgrown with weeds that sprout from crumbling facades." Jordanian Beirut-based artist and audio investigator Lawrence Abu Hamdan is joining Halwani and Lebanese Tarek Atoui as the only Arab artists included in the central exhibition of the Biennale. His award-winning performance Walled, Unwalled is a 20-minute video piece.

"An immersive and deeply emotive work based on the harrowing experiences at the Saydnaya prison in Syria, the video pieces together various accounts and legal narratives that revolve around evidence heard through the prison walls," reviewed Sleek Magazine. "Performances and reenactments are juxtaposed with a sombre monologue by Hamdan himself. Serving not only as physical boundaries, the walls in Hamdan’s film are shown to be symbolic of the divisions experienced in societies across the globe in times of political and social unrest." The last artist featured in the Biennale's main exhibition is Lebanese-born Tarek Atoui, artist and electroacoustic composer. Primarily a sound performer, Atoui has also developed his own inventive instruments, which he incorporates to make his performances a full audiovisual experience. He is performing with the Swedish research platform Composing/Public/Space (C/P/S) from the opening week up to the end of the biennale. Atoui is presenting his work as a part of the main exhibition and will also take place in the biennale’s performance program during the opening days. In addition to the official program, a series of extra performances will take place.

You can find more information on venues, ticketing, and schedules here. 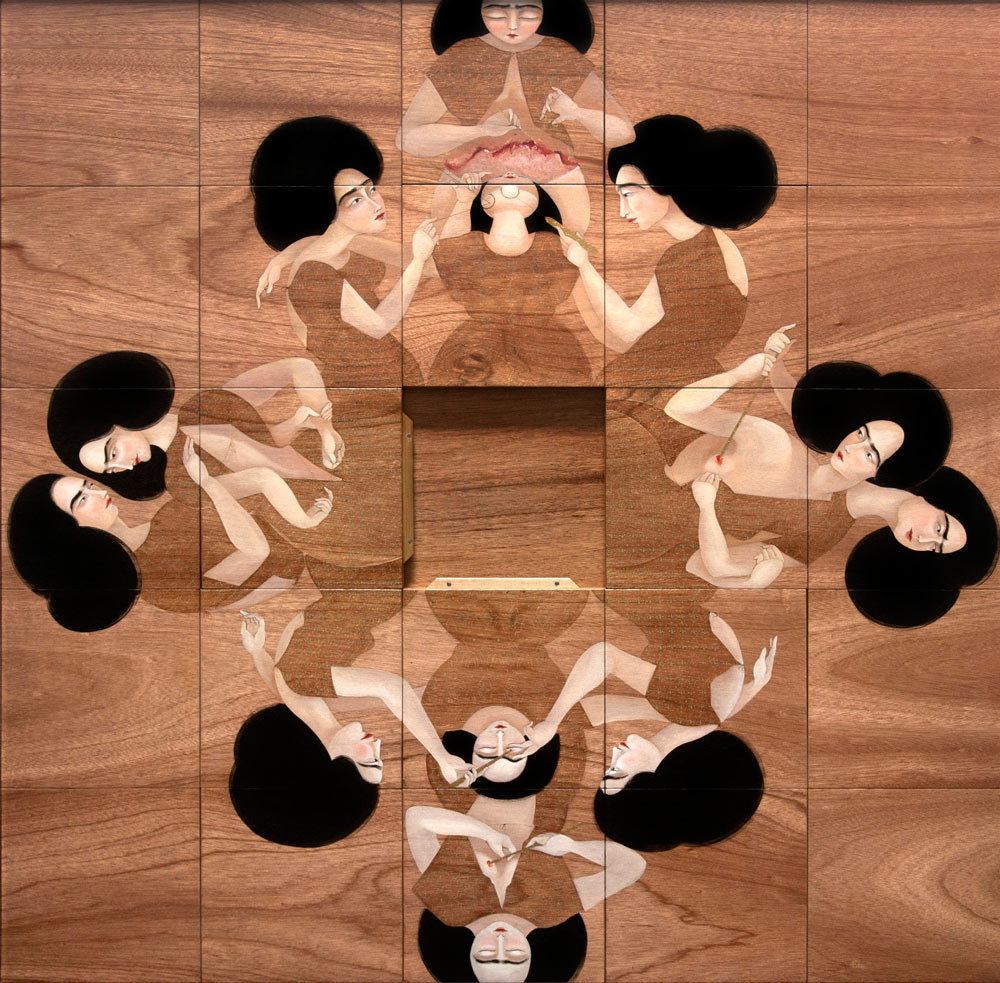 From the female visionaries behind Syria’s modern art, to a 1400-year visual...